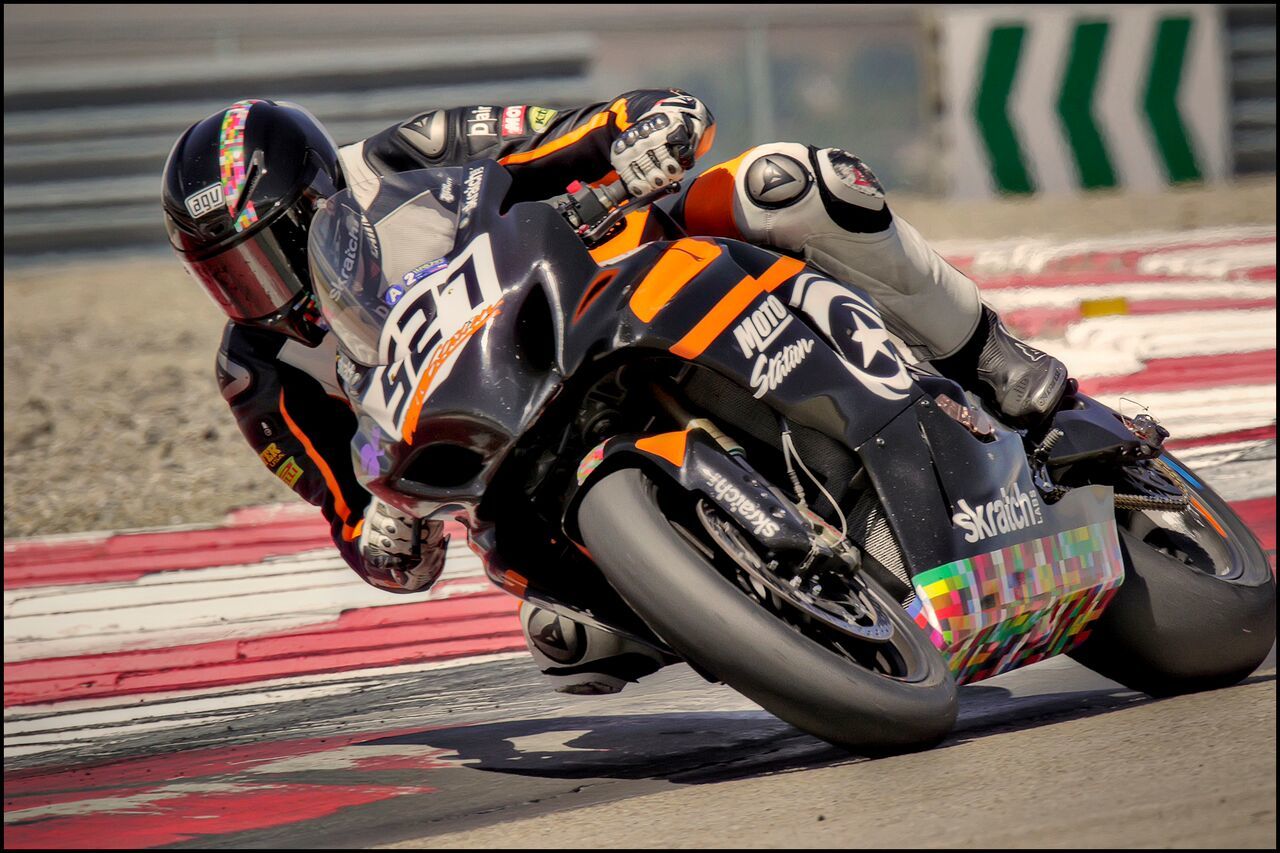 May 20-21, 2017 at the East Track configuration of Utah Motorsports Campus located in Tooele, Utah.

The Utah Sport Bike Association’s Masters of the Mountains second round was held this past weekend. Saturday was a beautiful spring day, leading to high hopes for Sunday, but those hopes were crushed as everyone woke up to morning rain and an track that could never seem to completely dry before it rained again. Conditions were such that tire choice was more of a coin flip than an informed decision.

Saturday morning dawned bright and clear, if a little chilly. The first practice sessions saw a practically empty track as racers waited for the sun to warm the track just a little bit. As the air and racing surface warmed, practice sessions began to fill, and expectations were high.

The first race of the day was the Street GP and New Racer Certification (NRC) mock race. The Street GP is a class created by the USBA that allows people on trackday prepped bikes to come to a race weekend and experience the thrill of racing for a fraction of the cost. The racers are required to attend classroom sessions in which the intricacies of racing are explained. They are allowed to ride the practice sessions, and then they get a 4 lap race. Many Street GP riders end up racing full time. The NRC class does it’s mock race in conjunction with the Street GP. The NRC is designed for people that wish to apply for a race license with the club and haven’t raced before, or haven’t raced in a while. There are classroom sessions involved, followed by the four lap mock race. If the NRC student doesn’t crash or endanger another rider, they are promoted to Provisional Novice. After certain criteria are met as a Provisional Novice, the racer may then apply for a race license as a fully qualified novice racer.

The second race of the day, the Deseret Dash (race 1 of 2), set the tone for the rest of the day. The race is GTO format featuring both expert and novice racers. The race is a single wave start, but experts and novices are scored separately. In the expert class, Michael Bradshaw took the win, but not easily. David Purcell challenged him the entire race, and Bradshaw finished just half a second in front of Purcell. The novice race wasn’t as closely contested with first place finisher Matt DeVico finishing three and a half seconds ahead of second place Jeff Vandervoort.

The rest of the day featured some close battles, and some dominating performances. Joshua “Ricky” Bronfman finished a full 40 seconds in front of second place during the Combined GTO race. Ryan Richardson and Kinzer Naylor fought for second place in the Moto 2 race with Richardson edging out Naylor by a scant .2 seconds, but 6 seconds behind first place finisher Kory Cowan. One of the most intense races of the day was Moto 1. After a hectic start through turn 1, Jerry Hicks took the lead, with Bronfman right on his tail. The two of them managed to build a comfortable lead over the rest of the field, and Bronfman stayed tucked behind Hicks for the entire race. It looked like Hicks was running such a good race that it would be impossible to get by him, but then Bronfman managed to squeak a pass up the inside of Hicks on turn one of the final lap. He managed to hold the lead to the finish line, defeating Hicks by just under half a second.

Sunday morning didn’t start nearly so well. It had rained half of the night, and the track was soaked. The track was a ghost town for the first three practice sessions as everyone waited to see what the weather was going to do. The forecast was ambiguous, with every weather service and app reporting something different. The rain stopped long enough for the track to dry a little bit for the second set of practice sessions, and a few people braved the conditions to warm up and check out the condition of the track. The race line seemed to be drying, and the track surface was very wet in only a couple places. Racers began to prep their bikes for the day in anticipation of a dry track. Unfortunately, the skies opened up again for the third set of practice sessions, and only a few went out on rain tires to practice. The rain continued intermittently, never allowing the track to dry. It wasn’t quite wet enough to allow for wet tires for a full race without puddle hunting, and it was nowhere near dry enough for slicks or DOT’s to run race pace.

Because of the weather conditions, the first race of the day, Time Attack, had an underwhelming grid size; of the 20+ riders registered for the race, only three came out for the start. All three finished the race without incident. The Second event was qualifying for one of the two premier races of the weekend, King of the Mountain GTO. The track still wasn’t in any condition to make a confident tire choice, and leading up to the qualifying session, everywhere you looked you could see people staring at the sky, willing it to quit raining, or at least to start raining enough for rain tires to function properly without wearing out after two laps. Only three competitors showed up for qualifying-the rest decided to take their chances with randomly generated grid positions, sacrificing potentially advantageous starting spots in the hopes the weather would improve.

The rain intensified a little bit during lunch, and for the first race of the day. 8 racers gridded up for the combined grid Modern Vintage and Production 300 race. Ricky Bronfman, his first race in the rain, put on another dominating performance. You could tell he was unsure of the rain tires for the first lap, but he figured them out quickly, and finished over a minute in front of second place finisher Kevin Dolan.

Only three racers showed up for the grid of KOM GTU, the first of Sunday’s two premier races. The rain had lightened considerably during the previous race, stopping entirely at times. Many racers were caught with not enough time to make a tire change, and most were unwilling to run 10 laps on rain tires, so they retired from the grid. Ryan Richardson challenged Kinzer Naylor for the lead for several laps, but a mistake in turn one made it impossible to catch Naylor. Richardson finished second, followed distantly by Jerry Carson.

By the end of KOM GTU, the track was starting to dry out, and while rain threatened, it looked very possible that the rest of the day could be dry. The Combined GTU race went off without a hitch. The track dried during this race…just in time for KOM GTO, the second premier race of the day.

The KOM GTO race saw ten racers grid up for the start with Oleg Pianykh leading the championship in points. Unfortunately, the race was red flagged after just one lap due to a crashed rider. The racers were brought back in, and once the track was cleared, they took their starting positions once again. Pianykh took an early lead, but Jerry Hicks was hot on his heels, never letting Pianykh get more than a few bike lengths ahead. The race was red flagged a second time when Pianykh’s bike suffered a catastrophic mechanical failure and caught fire. The competitors were again brought in, and were directed to their pits to get back on warmers while Pianykh and his bike were safely recovered and brought back to the pit area. Pianykh was uninjured, but he was not able to collect any points for the race, and the KOM GTO points race is once wide open. Once the track was cleared for the second time, the riders took to the grid, this time in the positions they were in when the race was red flagged. The race was also shortened from its normal 14 lap format to 10 laps because they had already completed three laps before the race was paused. The race ran its ten laps without any further red flag incident, and Hicks dominated the rest of the field from the start. He took first almost thirteen seconds ahead of his team mate Brian Childree. Childree also put on a strong performance, finishing almost a full lap ahead of third place.

The rest of the races followed the same script. There were commanding wins and very close battles. There were more crashes than usual on Sunday, most of them at least partially attributable to the track conditions, but no one was seriously injured. Overall, the weekend was a success despite the challenging conditions brought on by the weather. The point standings for the championships have gotten a little more interesting and should make the third round, held in June, be extremely exciting.

The Utah Sport Bike Association is a Utah Non-Profit dedicated to promoting education, safe riding and competition in the Intermountain West. You can find more information about the USBA, upcoming events, and schools at www.utahsba.com or find us on Facebook at https://www.facebook.com/utahsba/