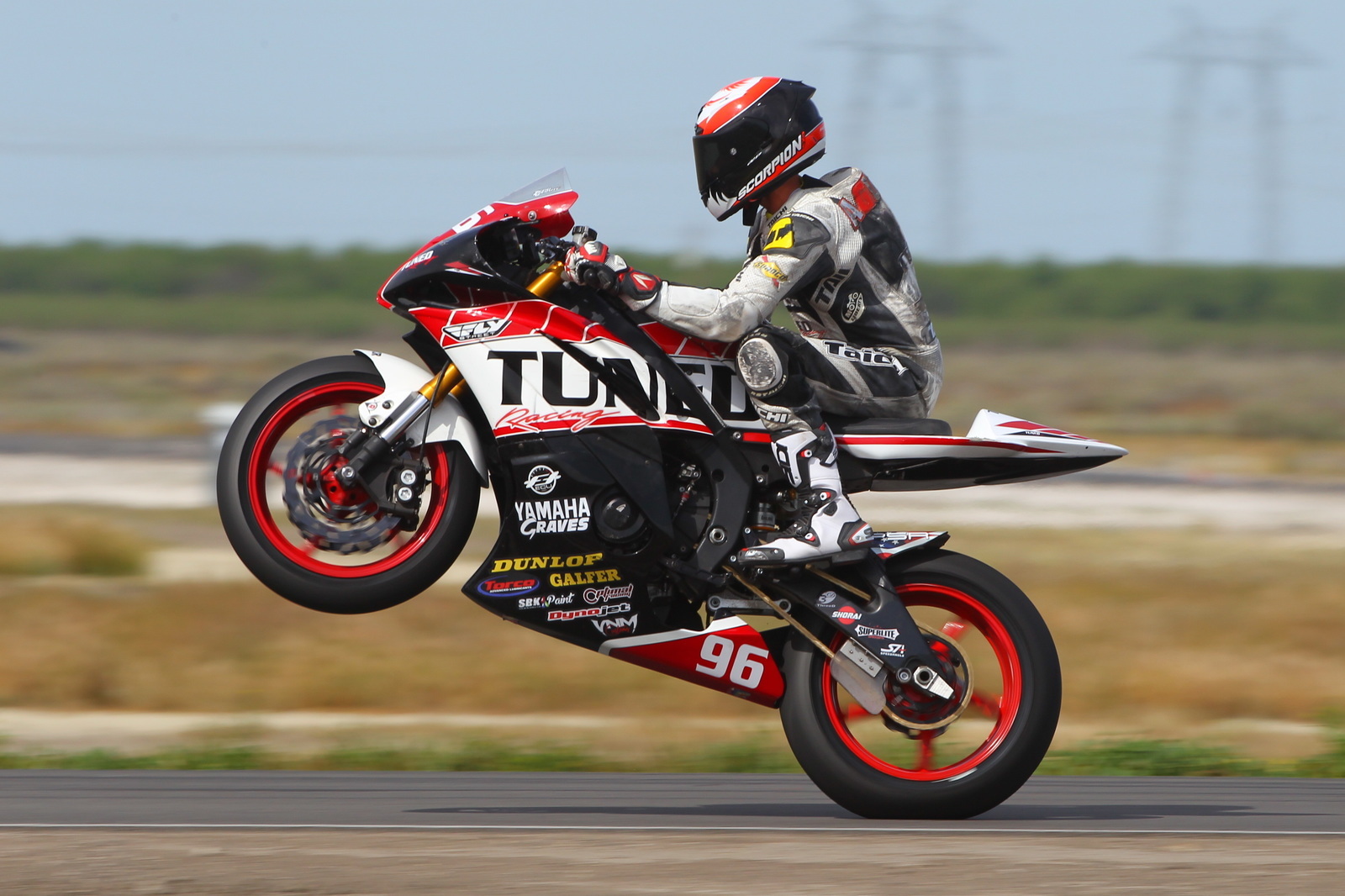 It was a frustrating day for Tuned Racing riders Bryce Prince and Jason Aguilar for the AFM opening round at Buttonwillow Raceway Park. Having just returned from Daytona on Thursday, the team had to scramble to get the bikes ready for Buttonwillow. Jason’s bike was in pieces at his home in Placentia, and Bryce built his bike in 2 days. Team Mechanic, Blair Ramey, picked up Jason’’s bike Friday night, drove back to the team headquarters, and finished putting the bike together that night. By the end of practice on Saturday, the teammates were turning fast laps.

In the Team’’s first race Sunday, 600 Production, Jason Aguilar gridded on the second row, and grabbed the lead on the first lap, running a personal best 1:46.7 on the 2nd lap. Jason continued to stretch his lead to several seconds. On the final lap, Jason came into the last turn and caught a false neutral, causing him to run off track. The back end stepped out as Jason tried to steer the bike back on track in an attempt to save what appeared to be a certain victory moments earlier. That resulted in a wicked highside, with Jason landing on his head and shoulder.

As the team scrambled to get Jason’s bike repaired, Bryce headed out for the Formula Pacific Race. Joey Pascarella jumped out to an early lead and broke away from the pack, setting a new track record in the process, while Bryce had his hands full battling the top 1000cc bikes of AFM’’s best. After several laps, Bryce finally got clear of the bigger bikes and closed the gap to first. Bryce ran a personal best 1:45.219 on the 6th lap. On the final lap, Bryce pushed a little too hard in the sweeper, resulting in a highside. During the crash, the bike ran Bryce over, then started tumbling with parts flying everywhere, ending Bryce’s day early.

What looked like 2 certain podium finishes for the team quickly evaporated in last lap incidents. Jason was not sure if his shoulder would hold up for the 600 Superbike race, so he brushed the dirt off his shoulder, tested it on the warm-up lap, and decided to proceed. Jason got an excellent launch and was in 3rd place going into Turn 1. He was moving up when a crash further back in the field resulted in a fire, bringing out the red flag. On the restart, Jason was 5th coming out of Turn 1. As the leaders approached Turn 2, two riders at the head of the group bumped with one of the leaders going down. Several bikes ran wide allowing Jason to move to the inside and assume the lead. Jason never looked back, setting a new personal best of 1:46.574. Jason made the final corner of the last lap this time, taking a 7 second win.

Jason’’s personal bests were also class track records for AFM at Buttonwillow in 600 Production and 600 Superbike, eclipsing records set in 2010. “”I decided to run my last race and see how my shoulder held up and I’ve never been in so much pain before in my life, but I was really happy to come home with a win. Can’t thank the team enough for throwing my bike back together and getting a bitchin’ suspension setup. Also can’t thank my gear sponsors enough for keeping me safe when things go wrong. I’m looking forward to MotoAmerica!” stated Jason Aguilar.

Tuned Racing also welcomed back Solarmax Technology as a sponsor just prior to the race weekend.