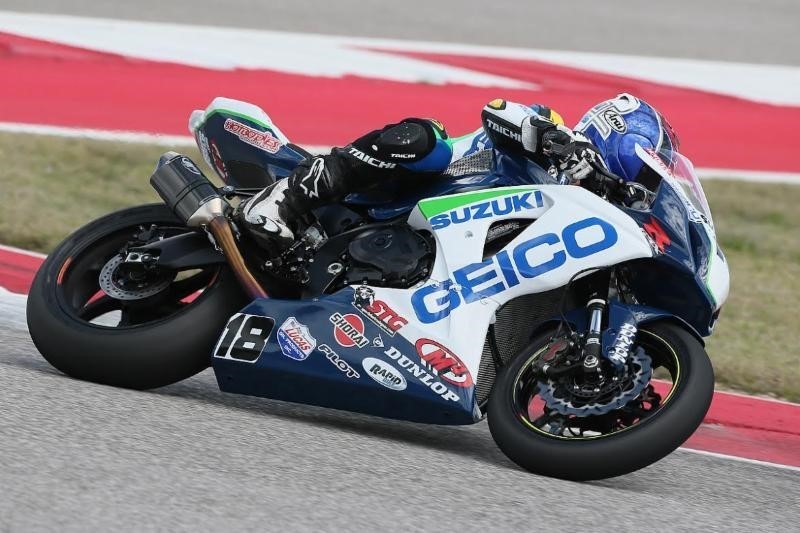 AUSTIN, Texas (March 24) — With the beginning of a new era of motorcycle road racing in the United States just a few weeks away, veteran rider Chris Ulrich and his Team Hammer crew recently spent a few days at Circuit Of The Americas (COTA) near Austin testing their new GEICO Suzuki Superbike.

Ulrich, whose 22 years of racing experience set him apart from most of his peers, said a switch back to a manufacturer he campaigned for many years made the transition easier for his team, and the results showed on the track.

“We are pretty pleased with the test,” Ulrich said. “The upcoming race at COTA will be the first for most American riders on that track, so this was both a learning experience for us as well as a time to break in the bike. I think we successfully checked both of those goals off the preseason list.

“I’d like to get some more riding in before the season starts so we can be absolutely certain we’re ready to go. You always want to be fully up to speed when the real racing begins. We tried a lot of different setups in Austin. Some worked well, some didn’t work so well. It was a true test in that sense.”

The inaugural MotoAmerica season begins its eight-race season April 9-12 at COTA, the newest racetrack in the county. The hilly track is 3.4 miles long and boasts 20 turns. MotoAmerica action will be held in conjunction with the MotoGP event taking place at the same time.

“It’ll be a huge weekend for motorcycle enthusiasts and riders alike,” Ulrich said. “The facility is absolutely first-rate from top to bottom. It’s a long track with lots of elevation changes and lots of turns. It’ll make for great racing. If I wasn’t racing I’d still be there to watch the action. It’s going to be a great show.”

Ulrich is used to new challenges. As racing editor for Roadracing World magazine, the 35-year-old from Lake Elsinore, Calif., routinely tests new bikes and tracks for his various assignments.

“It’s true, I’ve probably ridden around more tracks and been on more motorcycles than anyone on the grid,” Ulrich said. “I’ve learned how to adapt to different situations. Maybe that gives me a slight advantage, but when you’re racing against these guys and girls out here, everyone is so good they catch up super fast. We’ll just try to do the best we can do and have some fun along the way.”

Navarra Test For KRT Duo After a short break to...
Read more
Feature