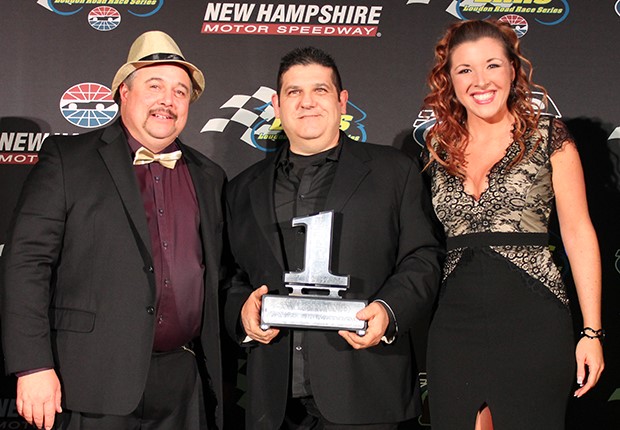 Doucette is no stranger to winning, making this his eighth Loudon Road Race Series (LRRS) Track Championship. This win marks his second year in a row and prior to that he won the title consecutively from 2010-2015. This year, the Sandown, N.H. native not only is the winner of the Formula 50 Lights and GTL divisions, but is the first runner up in the Formula 40 Lights, Lightweight Grand Prix, Middleweight Grand Prix and Ultralight Superbike divisions. He’s also the second runner up in the Combined 300 Superbike, Heavyweight Superbike and Middleweight Superbike divisions.

“What an awesome season,” said Doucette. “This is the eighth time I’ve won the overall track championship, and most of the people I race with are like family. I’d do anything for any of them.”

Buffington, who is the Track Champion in both the MOAT Mountain Road Course Series and the Legends Division of J&J’s Yolk & Co. Oval Series, had a phenomenal 2018 season with 39 first place finishes (22 at NHMS), five second place finishes and a third place finish in the Road Course World Finals. Residing in Plainfield, Conn., this marks the sixth time that Buffington has won this title and captured his 100th victory in U.S. Legend Cars International competition at NHMS.

“This season’s road course was the toughest one yet, and we didn’t take the lead until the very last race of the season,” said Buffington. “Just like I tell my kids, I don’t care if it’s soccer, school, whatever – you don’t just give up; you just got to believe. Congrats to Rick, and thanks to the LRRS guys for letting us be a part of their weekends and banquet. They’re always a lot of fun, and Saturday was no different. It was good to see Giovanni win his first championship as well.”

“It was a great season, and if you work hard, you get rewarded,” said Ruggiero. “The banquet was great, and I would like to thank everyone at New Hampshire Motor Speedway for putting it on and doing what they do every year for the road course racing. Hopefully next year I’ll be driving a legends car at NHMS.”

This marks the first year that J&J’s Yolk &Co. has been onboard as the entitlement sponsor for all of U.S. Legend Car International Oval Series racing action at NHMS.

The Loudon Road Race Series, MOAT Mountain Road Course Series and Legend and Bandolero Divisions of J&J’s Yolk & Co. Oval Series will all return to New Hampshire Motor Speedway in the spring of 2019 for another season of close, side-by-side racing.

For ticket information for events at New Hampshire Motor Speedway, including the upcoming Gift of Lights, Nov. 23 – Dec. 31, visit the speedway website at www.NHMS.com or call Fan Relations at (603) 783-4931.

The Loudon Road Race Series features seven weekends of Championship Cup Series motorcycle racing at New Hampshire Motor Speedway. The season spans April-October, and events run on the 1.6-mile road course. Over the years, LRRS has developed a reputation for having some of the closest and most intense racing on two wheels. A strong commitment to rider training and development has contributed to the quality of the LRRS programs.

Legends car racing is one of the fastest-growing and most affordable types of American motorsports. Powered by a motorcycle engine, a Legends Car is a purpose-built race car designed to resemble the legendary American automobiles of the 1930s and ’40s. Drivers range in age from 12 to 65+ years old. Bandolero racers may be as young as eight years old, and this style of racing bridges the gap between go karts and legends cars.

NHMS operates two series at the speedway as a part of U.S. Legend Cars International on the 1.6-mile road course in the MOAT Mountain Road Course Series and the Legend and Bandolero Divisions of the J&J’s Yolk &Co. Oval Series on the 0.25-mile oval.