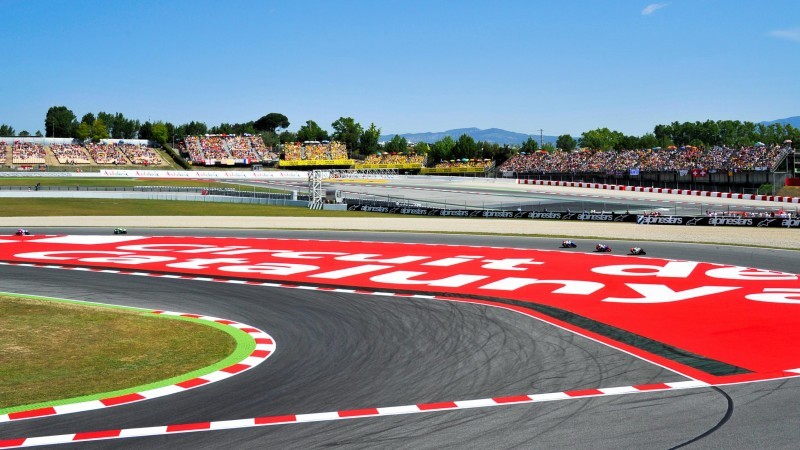 Lorenzo and Marquez out for home glory as Rossi plans comeback

The Catalan GP has been home to a number of fantastic battles and after the drama of Mugello, 2016 could very well be another.

Mugello was a weekend full of excitement, hard battles and daring last lap moves across all three World Championship classes, but the majesty of the final lap of the MotoGP™ race will not be forgotten anytime soon. Jorge Lorenzo (Movistar Yamaha MotoGP) and Marc Marquez (Repsol Honda Team) put it all on the line to try and steal victory, only 0.019 of a second dividing them. It was the closest premier class finish since 2011 and was the Spanish pair’s fiercest battle since 2013. Neither wants to be defeated at home in Barcelona as Lorenzo looks to make it three in a row while Marquez aims to be back on the top step for the first time since Austin. But it’s certainly not just the two Spaniards who will be in the mix.

While Mugello was a glorious weekend for Lorenzo and Marquez, it was a torturous one for Valentino Rossi (Movistar Yamaha MotoGP) who had his bike expire while battling for the lead. For the second time in 2016 Rossi walked away without points, now 37 points adrift of the championship lead. This isn’t the first time Rossi has headed to Barcelona, Lorenzo’s backyard, with a deficit in the championship. Back in 2009 Rossi produced one of his most memorable races, besting Lorenzo on the last corner of the last lap and laying down the law at his home.

There’s a lot to play for amongst the top three, but there’s 16 other riders all ready to jump on the podium should the opportunity present itself. Both Maverick Viñales (Team Suzuki Ecstar) and Aleix Espargaro (Team Suzuki Ecstar) started on the front row at the 2015 Catalan GP and will be out to do it again. Viñales has continued to grow in 2016, taking a podium in France and another front row in Mugello, the Spaniard always a threat. Pole setter in 2015, Espargaro has had more of a mixed year and is ready to get back to the top six after a rough weekend in Mugello.

The dynamic Ducati Team duo of Andrea Iannone and Andrea Dovizioso will also undoubtedly be threats in Qualifying and in the race. Iannone managed to set a new top speed record in Mugello, hitting 354.9Km/h during the race, a powerful engine an added bonus down the Circuit de Barcelona – Catalunya’s one kilometre straight. In the last three years Iannone and Dovizioso have only once finished inside the top five between them, Iannone fourth in 2015.

Bradley Smith (Monster Yamaha Tech 3) was back on form in Mugello, taking the Independent Team victory just ahead of Danilo Petrucci (Octo Pramac Yakhnich). The result, with both Pol Espargaro (Monster Yamaha Tech 3) and Hector Barbera (Avintia Racing) having difficult weekends, has tightened up the standings, 12 points now separating the leading three.

Loris Baz (Avintia Racing) will be missing the Gran Premi Monster Energy de Catalunya because he suffered multiple fractures in his right foot in Mugello and will be substituted by Michele Pirro.

Six rounds in and there’s no clear favourite in the Moto2™ World Championship battle, will Montmelo offer clarity?

Each time a rider takes the advantage in the intermediate class championship, their rivals strike back at the next round to re-take the lead. Sam Lowes (Federal Oil Gresini Moto2) and Alex Rins (Paginas Amarillas HP) continue to swap the lead as each wins or has a difficult weekend. Neither was able to finish on the top step in Mugello, but Lowes left as the championship leader thanks to his third place. He arrives at the Gran Premi Monster Energy de Catalunya with 98 points, just two more than Rins.

While Lowes has never stood on the podium in Barcelona, Rins arrives at his home round with two past second place finishes including one in the Moto2™ race in 2015. Rins had a difficult weekend in Mugello, sent to the back of the grid during the race restart for failing to exit the pits in a timely manner, but recovered to a credible seventh place. The Spaniard clearly has the speed to challenge for the title but just needs to find some more consistency having twice finished outside the top five.

Since taking victory in Qatar, Tom Luthi (Garage Plus Interwetten) has only once finished on the podium when he was third in France. The Swiss rider has remained a stalwart of the top ten, often battling for the podium in the early stages of a race. Victory and his solid top ten record have him third in the championship, 16 points behind Lowes at the top of the table. Since 2010 Luthi has achieved three podiums in Barcelona, second in both 2010 and 2012 before finishing third in 2013.

But the man of the moment is undoubtedly Johann Zarco (Ajo Motorosport) who took a sensational win in Mugello, besting Lorenzo Baldassarri (Forward Team) by 0.030s. Some had begun to question the French rider after failing to score at his home round in France, but the 2015 Moto2™ World Champion remains as fast as ever. He’s just a point behind Luthi and only 17 points off Lowes, a mistake from the leading duo and Zarco will be right back with them immediately. In 2015 Zarco won the Catalan GP by 0.426s from Rins, improving on his second place finish from the year before. He’s not about to give up his crown without a fight.

The leading four in the championship certainly arrive as the favourites for the race, but Baldassarri remains as an ever-present threat to the podium. In the past three races he has twice crashed while challenging for a top three finish, finally able to put it all together at home in Mugello to take the best result of his career with second.

Teams and riders remained in Mugello for a day of testing on Monday after the race but this was unfortunately affected by weather, several riders going home early.

Can Binder be stopped?

Three races and three wins for Brad Binder, the South African continuing to shine bright in the lightweight class.

The start to Danny Kent’s 2015 season was one of the most dominant in the lightweight class, the Brit leaving the sixth round of the year in Mugello with 124 points. Brad Binder (Red Bull KTM Ajo) may not have won races by over eight seconds, but his performance is no less impressive. Since taking his incredible last to first win in Jerez, he has only gotten stronger at each round and showed he’s a more than capable fighter in the midst of madness in Mugello. He arrives at round seven with 127 points in hand and a 49 points lead, but, as Kent showed in 2015, anything can happen in the remaining 12 rounds.

Mugello proved to be a disastrous weekend for Jorge Navarro (Estrella Galicia 0,0) who was brought down after contact with another rider, resulting in his first DNF of the year. The Spaniard is yet to win his first race, but remains a constant threat at the sharp end. Having come through the FIM CEV Repsol championship, Navarro has ample experience at the Barcelona circuit and will no doubt be pushing Binder once again. Navarro arrives 49 points back on the championship lead, Binder’s closest rival.

Romano Fenati (SKY Racing Team VR46) looked to be on the verge of home glory, until a broken chain saw him retire. The Italian is now a massive 60 points behind Binder and needs to start beating Binder; unfortunately the Montmelo circuit has never been one of Fenati’s best. 2014 saw the Italian finish in fifth, his strongest result at the track.

Binder may have run away with the championship lead, but the battle for fourth remains as one of the tightest in the class. Rookie Nicolo Bulega (SKY Racing Team VR46) currently holds the position with 54 points, just one ahead of Francesco Bagnaia (Aspar Mahindra Team Moto3) who arrives in Spain buoyed by his third podium of the year. Bagnaia remains as one of the few riders capable of consistently putting the Mahindra amongst the leading group. The duo are closely followed by fellow VR46 Academy rider Niccolo Antonelli (Ongetta-Rivacold), only three points behind Bulega.

Antonelli took fourth in the 2015 Gran Premi Monster Energy de Catalunya, one of only two riders in the top five still in the championship. Enea Bastianini (Gresini Racing Moto3) finished second in the same race and heads to Barcelona with the hopes of being closer to full fitness. A broken wrist forced the Italian to miss Le Mans, coming back in Mugello to take sixth on the grid and 12th in the race, proving he can fight through the pain barrier. The 2015 title contender is yet to take a podium in 2016, but could deliver in Barcelona.

Monday after the race in Italy offered the first official in-season test for the Moto3™ World Championship, sadly it was a day of interruptions as morning rain and high afternoon winds limited track activity. Several riders got a chance to work on their wet weather setup while others chose not to head out at all.

In his first visit to the historic racetrack, Sam...
Read more
Load more