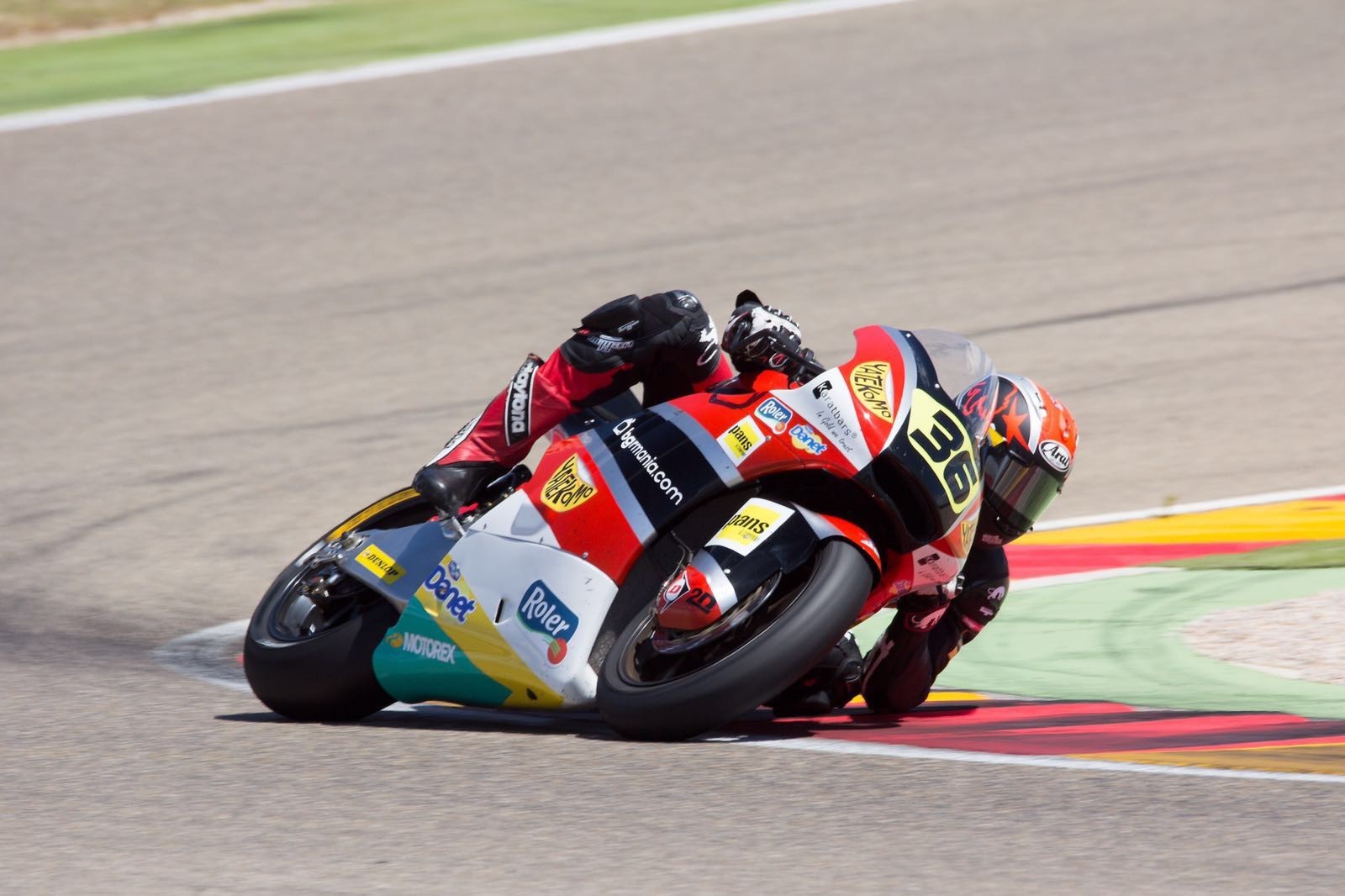 9th & 11th In Moto2 Double Header For Uribe At Aragon

Qualifying 14th, the AGR rider made forward progress in both races despite windier conditions on race day to finish 9th & 11th respectively in the day’s two races.

The opening encounter saw him part of a multi rider battle for 6th while a shortened second race saw the American teenager locking horns in the fight for 10th.

Overall Uribe sits an impressive 10th overall in the standings having scored points in all of the four races held so far this year, one of only five riders to do so!

Jayson Uribe (AGR Team) – 9th & 11th: “I had a very educational weekend at Motorland Aragon for round two of the CEV Moto2 championship. Starting off with two very slippery practice sessions on Friday, I struggled with my confidence on the bike, and I didn’t get to my goal time. The grip levels on Saturday were much better, right up until a rider lost his drain plug and spat out a river of oil, causing about 15 riders to crash, Including myself and my team mate, Steven Odendaal. After some amazing work by my loyal crew at Team AGR, the bike was good to go for a restarted Q1. I ended up 14th on the grid, which I was very satisfied with. Sunday was an eventful day to say the least! I had amazing battles in both races. My position was better in race one, where I ended up 9th (missing out on 8th by 0.4s), but I feel that I rode not only faster, but smarter in race two. Even though I finished 11th, I closed a three second gap to the group in front of me and was battling for 10th, missing out by just 0.2s at the flag. I learned a lot this weekend about how to ride the Kalex Moto2. I’m getting more confidence with the tyres and I’m starting to unlock the real potential of the bike. I can’t wait to get back on my trusty steed at the Circuit De Catalunya in 2 weeks time!”

More, from a press release issued by Remy Gardner’s publicist:

Remy Races To 5th After Front Row Start At Aragon

Remy Gardner showed his front running pace for the second consecutive race of the 2016 FIM CEV Repsol Moto2 Championship, qualifying 3rd and racing to a strong 5th in race 2 at Motorland Aragon earlier today after crashing from the lead in the opening encounter.

Buoyed by his speed at the opening round at Valencia, the teenager excelled in qualifying at Motorland Aragon on Saturday putting his Race Experience Kalex onto the front row of the grid, just missing out on a maiden Moto2 Pole Position by 0.247s.

Race day dawned with Remy once again at the sharp end in morning warm up and things were looking good.

As the lights went out Gardner made an excellent start, heading the field before falling from the lead in the early stages. Able to continue, he rejoined the race before unfortunately retiring to the pits shortly after half race distance.

Thankfully the bike was repaired and Remy was back on the grid for race 2, fighting as he has in all 4 Moto2 races so far this year for the podium.

Running 3rd for the majority of the race he was eventually classified 5th after a tense and exciting race saw him finish just over 4 seconds from the win – impressive considering Aragon was only his second event as a Moto2 rider.

In the championship the 11 points gained today move the young Australian into 14th overall in the standings ahead of the next double header which takes place at the Catalunya circuit in a fortnight.

Remy Gardner – DNF + 5th: “Qualifying was delayed because of track conditions but when it did run I was able to put in a good lap and ended up 2nd. We tried some things in the final session but we used our new tyres in the morning so didn’t manage to improve, but with the slower conditions it was the right decision. Race one was a shame as we had the pace to run at the front but I crashed. Race 2 we changed the bike and went in the direction we had used in qualifying, but it wasn’t as good and I kept losing the front everywhere and nearly crashed again. It was a bad choice but that’s racing. We still need to work on the engine as we are losing a few tenths but we will keep working and move on to the next race.”

Ramirez wins in style in Motorland

The rider from Cadiz rode a brilliant race to take a win that places him on top of the World Junior Moto3 Championship. Gerard Riu gets close to the points after climbing up through the pack.

The strong wind has been a major player during the World Championship Moto3 race in Motorland Aragón as expected.

Marcos Ramirez has given proof again of his smartness and maturity with a perfect ride on his Leopard Stratos KTM under very heavy weather conditions. The rider from Cadiz has led from the start and got the most of his KTM so that just a bunch of riders were able to follow his pace. Then he just kept things under control until his final attack on the last laps. With only three laps to go Ramirez has scored his fastest lap and has opened a gap with the rest of the leading pack, taking him to the top of the pódium. With this victory, the Leopard Stratos Team rider extends his lead to fifteen points over second.

Gerard Riu has climbed some spots through the pack after getting involved in a first turn incident. He has then made it to a group of riders fighting for seventh place, but has finally ended up in 16th after yet another racing issue.

The next appointment for the Leopard Stratos Junior Team will be in two weeks time in the Circuit de Barcelona-Catalunya, on a double race format in which the 2.016 series will reach its half way point.

“Honestly didn’t expect this win because I really tried hard in the beginning to break the leading group, but I could make because of the heavy wind. My practice pace was completely useless because of the strong wind right after the first turn, so I just kept riding there even down to fifth.

Then with three laps to go I knew I could make a difference in the last turn so I just rode as hard as I could from that point and I could open a gap with a perfect lap just as fast as I did yesterday during practice, but under a strong wind today.

I want to thank the team for their effort, as we had a lot of problems in Le Mans, but we have been able to regroup here and get back in front. I hope we’ll keep up the job in Barcelona.”

“I’ve had some problems in turn one because a rider crashed right in front of me, so I’ve lost a few spots, but then I’ve been able to climb up through the pack and get a good pace, almost as fast as the leading group“

But I messed up with another rider in the last lap and I just could not get on top of my racing group. But I feel great today and I thank all my team for their job.”

“We are very happy. I must thank specially the technicians and the mechanics, as they have really prepared such performant bikes this weekend. We really needed this victory, not only for the points for the championship, but also to proove that we are challenging very strong rivals, so it was really important for the Leopard Junior Stratos Team to claim the victory today. And we did, so congratulations to all.”