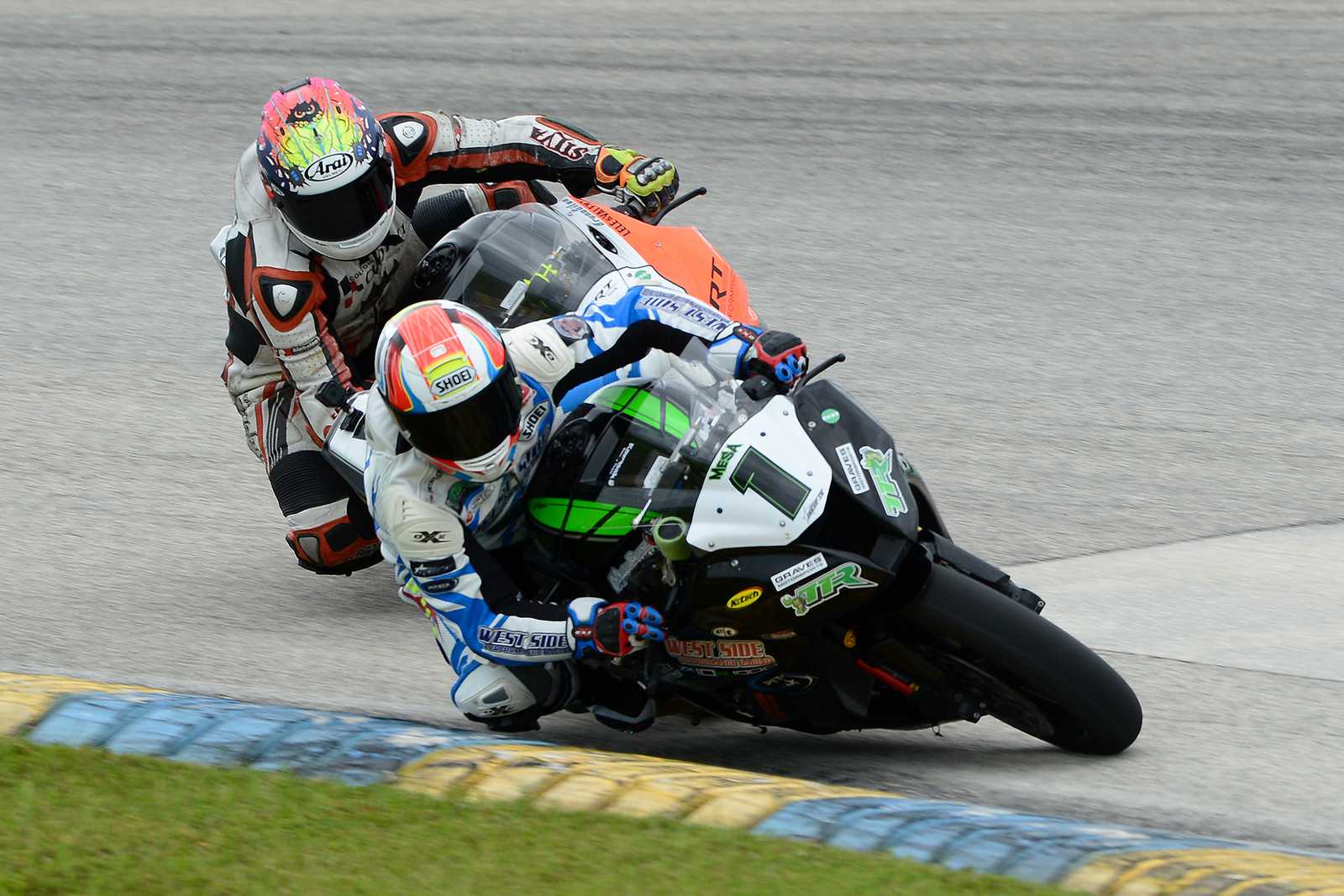 Stefano Mesa ran undefeated, winning all six of his races at Homestead-Miami Speedway. He is also currently undefeated in the CCS Florida Region’s Unlimited Grand Prix class this season with five out of five first place finishes in the class.

Mesa started and ended the day with holeshot leads on his Westside Performance Kawasaki ZX-10R. In his first race, GTO, he was out front from the start and led all ten laps of the race without challenge, opening a gap on the rest of the field, finishing ahead of Bruno Silva and Sean Dwyer.

Lucas Silva was the early leader of the GTU race, now on board an ART Performance Kawasaki ZX-6R, with Robertino Pietri and Mesa battling for the front spot. Pietri took over the lead on his Prieto Performance Yamaha YZF-R6 before the end of the first lap, running side-by-side with Silva and taking the inside line through turn eight. Mesa began to work his way to the front of this three-rider breakaway, and by the end of lap three, he was out front and stretching his lead on his Westside Performance Yamaha YZF-R6. Towards the end of the race, Mesa was able to use lap traffic to his advantage and maintain his lead to the checkered flag with Pietri finishing second and Silva third.

The Grand Finale of the day, Expert Unlimited Grand Prix, started with Mesa in another holeshot lead with MacLean, Bruno Silva, and Sean Dwyer looking for a way around. Silva made his passing move headed into turn eight before the end of the first lap to take over the lead, and held on until lap three, when Mesa maneuvered underneath Silva at the exit of turn three to pass on the inside of turn four and reclaim the top spot. With just a few laps to go, he methodically widened the gap over the rest of the field and the battle for second place behind him. Mesa claimed his sixth and final victory of the day with Silva, Dwyer, MacLean, and Jonathan Espinosa rounding off the top five.

On the podium, Mesa exclaimed, “I’ve been riding on top of my game. This guy has always been riding on top of his game, Bruno. Bruno makes me ride on top of my game. My hat’s off to Thermosman Suspension,” he continued. “This bike is working amazing since the beginning. We had a little bit of struggle, but the bike’s been coming around. And every time I ride it comes faster and faster, easier to ride. Doing mid 24’s in every single race is badass. I don’t think I’ve ever been down to that pace, so I’m pretty happy about that. I couldn’t do it without all the help from Dunlop Tires, Thermosman Suspension, MacLean actually lent me the radiator to go race. That’s good competition right there. Westside Performance, Luis, Charlie Long, all my friends, everybody, just thanks for being here.”

Bruno Silva stated, “Riding with these guys on this level, always looking back, Sean was right there. Stefano was, we were battling really close. Sometimes if you miss, you pick the throttle one tenth of a second earlier, they put a gap. On the last lap, I was trying my best to close the gap, but he makes it hard.” He went on to say, “I want to say thanks to God to be here with you guys. Thanks to my family for all their support. ART Performance for the amazing job those guys do on my bike, Eric Gray from GMD Computrack, Pirelli Tires, VP fuels, and all the crew.

“I had to knock the rust off a little bit,” Dwyer said. “These guys are riding really, really good. We got this new bike, we’re trying to develop it. These guys are riding really good, man. Thanks to Bruno and Stefano for always keeping the bar really high. I kind of ran out of talent in the last corner and had the thing step out really big. Full lean angle. I was able to save it, but I gave him enough of a gap where it was hard to get back to him. I want to thank a lot of people. Jeff Lampe, Dave Weaver, Mike Godin, Andrew Swensen, Chris Kruzel of Drippin Wet. ART helped me out, I’ve been running around.”

The CCS Florida Region is scheduled to compete next at Roebling Road Raceway with the Southeast Region and USGPRU on August 27-28th. For lap times, points standings, full results, and additional information on past and future events, please go to: www.ccsracing.us.