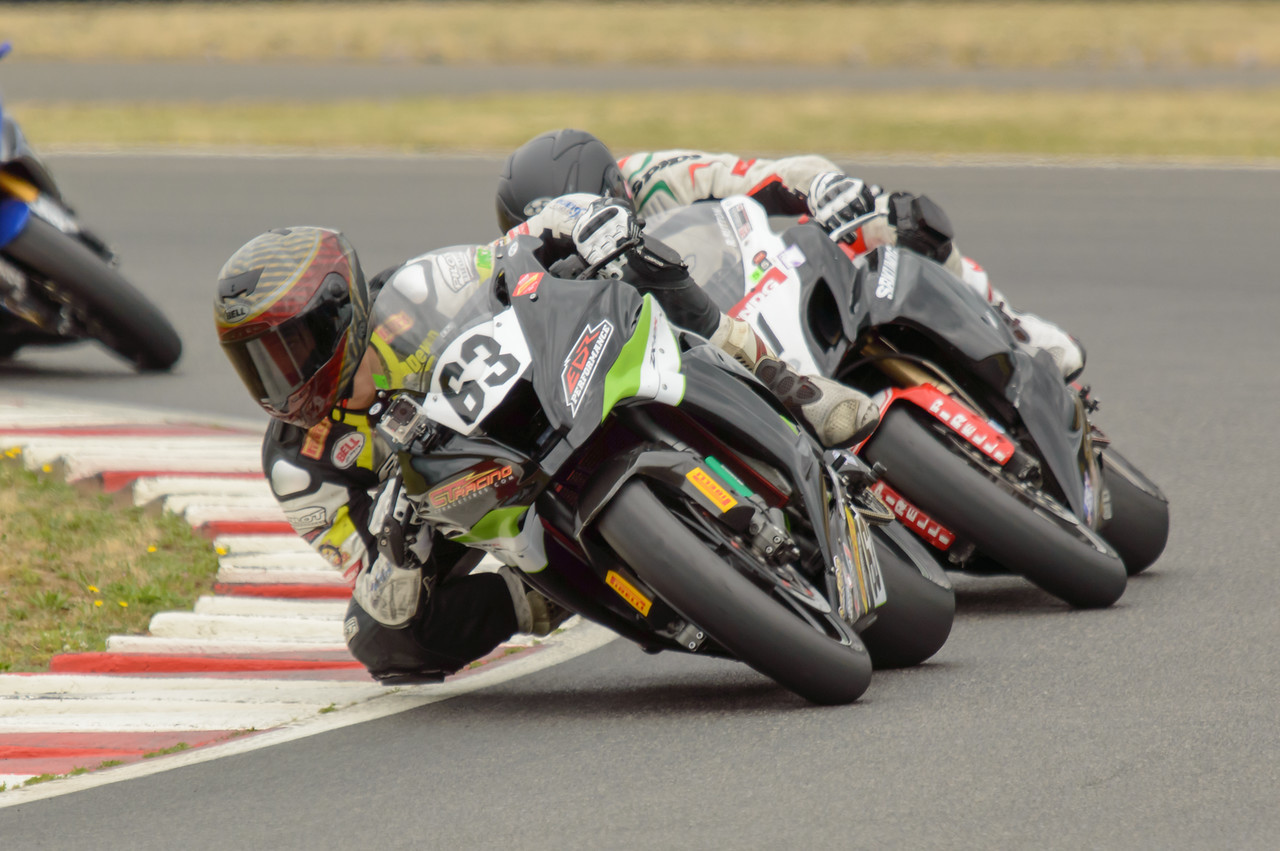 OMRRA hosted WMRRA for a combined round showdown July 23-24 at Portland International Raceway, and Devon McDonough captured points to extend his lead for the overall OMRRA championship while Andy DiBrino dominated the 600/750 field.

For Round Four of the 2016 season OMRRA and WMRRA joined forces for a spectacular event that was by far the biggest motorcycle road racing event in the Pacific Northwest with packed paddocks, trailers and grids. Several MotoAmerica racers, two reigning club Champions and three former club Champions lined up with dozens of up and coming young talent.

McDonough wasted zero time aboard his Pirelli-shod EDR Performance Kawasaki ZX-10R to guarantee his points remained well ahead of his contenders for the KFG Racing-sponsored Championship. McDonough set the fastest lap of the weekend with blistering 1:06.2’s in several of his races.

Saturday’s Formula Ultra race sponsored by Brothers Power Sports was won by current championship holder Ryan Sutton on his SBKUNDG Pirelli Suzuki GSX-R1000. Sutton put down an impressive 1:06.7 lap time after an eight-month hiatus from being on a motorcycle. McDonough suffered a mechanical problem halfway through the race, and Sutton was there to capitalize for the win. Jeremy Coffey took second place on his SBKUNDG Dunlop Kawasaki ZX-10R followed by Christopher Ancien for third on his Yamaha YZF-R1.

Open Super Sport sponsored by Oscar Solis’ Sol Performance/Pirelli made for a prominent exhibition of McDonough’s. McDonough won with an amazing 1:06.2 on his Kawasaki, and he was followed across the finish line by Coffey on his ZX-10R, who also dipped into the 1:06’s, running a 1:06.7. Sam Verderico was third thanks to a lap of 1:06.9 on his SBKUNDG Dunlop Yamaha YZF-R1.

Open Super Bike sponsored by FS2 Dave Alexander had some new faces picking up podiums. McDonough took another win with Kevin Pinkstaff finishing second aboard his Zlock Racing Dunlop Kawasaki and Chad Swain taking third on his Kawasaki ZX-10R. Coffey had his best lap of the race with a 1:06.3, also the fastest lap of the race, however he failed to finish on the last lap.

Sunday’s Formula Ultra race, a.k.a. the Devon McDonough Show, was won by McDonough, who built nearly a six-second lead over runner-up Sutton and third-place finisher Coffey.

Saturday’s 600 Supersport race sponsored by GP Suspension by DiBrino on his EDR Performance Dunlop Yamaha YZF-R6. DiBrino won with a blazing fast 1:08.6 lap time, Kinzer Naylor was right there on his Kawasaki ZX-6R and also ran a 1:08.6 on his way to second place. Up and coming racer Wes Stults on his Fuzzy Moto Pirelli Yamaha YZF-R6 also turned some heads by capturing third place among the MotoAmerica regulars.

750 Supersport sponsored by SPEEDDEALERS Motors turned into the Andy Dibrino Spectacle because DiBrino won with more than a six-second gap ahead of Stults, while Philip Melnyk took an outstanding third place on his Premium Rush Motorcycle Rentals KFG Racing Yamaha YZF-R6.

Sunday’s 600 Super Bike sponsored by Smarty Pants was also won by DiBrino aboard his YZF-R6 with Stults capturing second while breaking into the elite 1:08’s. Jai Armstrong, another MotoAmerica racer, took a commendable third place on his YZF-R6. DiBrino, Stults and Armstrong finished in the same order in the 750 Super Bike race.

Novice One sponsored by 2Fast Track Days highlighted Sam Shettle riding his Honda CBR600RR for the wins both on Saturday and Sunday. Aditya Tantry was also there for second place for Saturday, and on Sunday Tantry barely lost to Shettle by .047 second! Novice Two sponsored by 2Fast Track Days was dominated by John Gebbers and his BMW S1000RR running a 1:10.6 during Sunday’s race.

The popular 250 Cup presented some of the closest racing all weekend. Alex Tailer won the 250 Cup by finishing second on Saturday and winning on Sunday ahead of Kurt Hawk and Joe Pethoud. It should be noted that Sunday’s race had three riders all finishing within just .019 second apart!

Ultra Lightweight Supersport sponsored by KTM and Triumph of Seattle was won by Kelly Johnson on her KFG Racing Dunlop KTM RC390. Behind Johnson was Austin McCabe on his Motosport Hillsboro KTM RC390 and third-place Adam Faussett on his Tiger Tail Ninja 300. Ultra Lightweight Superbike was another Kelly Johnson Show, with Johnson winning with a fast 1:21.7 and a nearly-six second lead ahead of runner-up Fausset and third-place finisher Kurt Hawk. Lightweight Supersport had familiar faces again with McCabe winning, Johnson in second place and Faussett in third.

After four rounds of the 2016 OMRRA Overall Championship, McDonough leads with 159 points over Pinkstaff’s 124 points and Coffey’s 98 points.

More, from a press release issued by OMRRA:

For the second consecutive year, OMRRA welcomed their northern neighbors from WMRRA for a combined round at the Portland International Raceway. Racers were greeted with moderate weather conditions ideal for making good power and providing a sticky racing surface. With a full paddock on hand and grids near capacity, the racing on PIR’s ultra-fast, 2 mile circuit was frenetic.

In the KFG Racing Formula Ultra Championship, Devon McDonough of Damascus, OR was the one to beat as his program continues to distance itself from the competition. In Saturday’s race, McDonough shot out to the front with Ryan Sutton and Jeremy Coffey trying to stay with him. By mid-race, McDonough had the field in check but a bike issue forced him to return to his pit box. McDonough returned to the race and was able to finish but at the tail end of the field, picking up what could be championship deciding points at season’s end. McDonough’s adversity was a gift to the returning Ryan Sutton of Camano Island, WA. Sutton, in his first road racing appearance since shoulder surgery, showed he was back to form pushing McDonough from behind with blistering lap times and ultimately, the victory in Saturday’s contest. Joining Sutton in filling up McDonough’s rear view mirror, young gun Jeremy Coffey picked up a second. The final step of the podium was a last battle between Christopher Ancien, Sam Verderico, Kevin Pinkstaff and former WMRRA #1 Danny Lippis. The foursome battled all race long, when in the last lap, the luck and treachery of lapped traffic came into play with cagey veteran, Christopher Ancien stealing away the final podium spot. In Sunday’s contest, McDonough gapped the field, maintained the gap and went onto victory. Sutton and Coffey took second and third, respectively.

In the APEX Clubman Championship, which sees competitors from a variety of classes in a points race based on the best of two classes. With swollen grids due to the combined clubs, maximum points were available in most classes. Like a kid in a candy store, Andy DiBrino shot off the start and was the first in line to gobble up the bounty of points. DiBrino fended off the likes of a returning Kinzer Naylor and WMRRA’s Wes Stults to take four wins in 600/750 supersport and superbike classes. Devon McDonough dominated the open classes taking two wins and moves from sixth to third in the Clubman Championship. Adam Faussett continues to leads the championship on his Ninja 300. Rushing forward to challenge Faussett’s lead, a glut of KTM cup bikes piloted by the likes of Austin McCabe and Kelly Johnson cut into Faussett’s results, taking wins and relegating him to two thirds and a second place finish. In UltraLightweight Supersport, McCabe just inched out Fausett by .001 pushing him to the final step on the podium. Middleweight contests continue to heat up with Oliver Jervis leading the group. Two wins in Formula 4 and Middleweight Superbike keep Jervis in striking distance of Faussett’s championship with just two rounds to go. Alex Taylor of Portland, OR rides a variety of machines and is a top contender. Taylor took the overall victory in 250 Ninja Cup and two podium finishes on a ‘triple cripple’. Breaking into the top 5, Steve Suitor, current 3c plate holder, took home two wins in Middleweight Supersport and Middleweight Classic Superbike plus two additional podium finishes.

APEX Clubman Championship Standings – Round 4 of 6:

In the Langlitz Leathers Vintage Championship, Dean Willoughby had a breakout weekend posted two wins in Middleweight Vintage to narrow the points gap to two-time champion, Mica Grohn of Portland, OR. Grohn picked up two seconds behind Willoughby and reached the final step on the podium both times in Lightweight Vintage. The story of the 2016 season is Ryan Shanahan of Portland, OR. Shanahan who is known as the “Sunday Spoiler” has made himself more of a weekend fixture at the track and is putting together a championship winning campaign. With just two rounds remaining and merely 5 points separating Shanahan and two-time champ Grohn, the vintage series is heating up! Daric Cheshire entered the weekend fifth in points and with solid results in Lightweight Vintage, Cheshire moves up a position to fourth overall.

Other notable weekend performances included the return of the femme fatales of moto mayhem in the Formula Female class. Fresh off experience this season in the MotoAmerica KTM Cup Series, Valentine Welch dominated the class. Welch was on such a tear she was able to catch and pass an entire class of similar 600cc machines which had started approximately 20 seconds ahead of the Formula Female class. The weekend also saw the surge of a ‘new’ breed of machine known as the ‘triple cripple’. Disabling a single cylinder on a 600cc machine makes them eligible for certain middleweight classes. Doug Harvey and Chris Page successfully piloted ‘triple cripples’ to victory in Middleweight Sportsman and 450 Superbike, respectively. This configuration of race machine resulted in six podium finishes over the weekend.

The Oregon Motorcycle Road Racing Association (OMRRA) developed the two-race per weekend Formula Ultra Championship, the ‘your best two classes’ Clubman Championship and the two-race per day, Olympic-scored Vintage Championship, promoting safe, competitive road racing in all categories. OMRRA, incorporated in 1972 as a non-profit, volunteer run organization, has members ranging in age from 12 to over 70, racing motorcycles of many brands, sizes and ages. OMRRA operates at Portland International Raceway, a city park and world class track. For more information, visit www.omrra.com and join us at www.facebook.com/omrra.racing and subscribe to our YouTube channel and watch live racing!