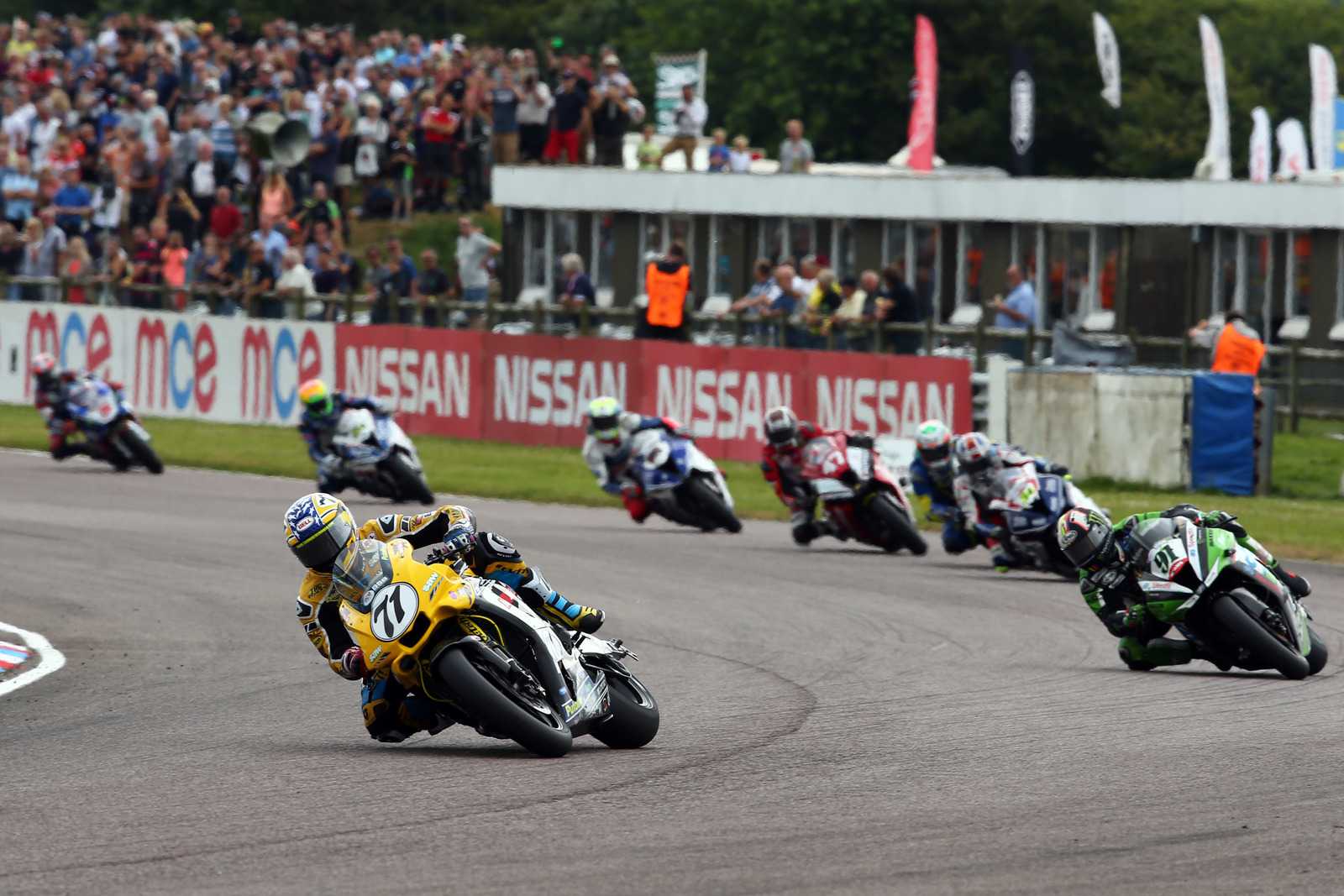 James Rispoli delivered a determined performances at the sixth round of the MCE Insurance British Superbike Championship at Thruxton last weekend, improving his pace throughout the event. He was however hampered by tyre issues in both races at the Hampshire circuit.

The circuit is renowned for its abrasive character and the Anvil Hire TAG Yamaha team worked throughout the weekend to try and find the best set-up for race distance. The American rookie improved his pace by 1.938s from the opening free practice to qualifying; moving back into the second stage of qualifying to claim twelfth place on the grid, and start race one as the highest placed Yamaha.

In the opening race Rispoli was battling inside the top ten, however the race was red flagged for an incident on the tenth lap and with a 12 lap restart, the tyre had already reached its optimum and the 25-year-old was forced to retire from the race.

The lap times in the 12-lap race one sprint decided the grid for race two and with the tyre woes in the second stage, Rispoli was forced to start on the tenth row of the grid. A lightning start and some decisive passes on the opening lap moved him up the order, but again despite changes for the second race, his momentum was halted through tyre degradation towards the end of the race.

Rispoli said: “I am really pleased with the weekend and how I rode. We seemed to have a pretty decent pace and I felt like we were in the hunt from the start. We did have to find a little bit of pace during the weekend, but we always aim for more in every session, and I had a lot of good people in my corner to help with the situation.

“We made a few changes over the weekend that confirmed a few things but most of it came down to gritting it out in qualifying and finding a lot of time in that session. We were the top Yamaha in qualifying and ahead of some of the factory bikes, which was a huge statement for us.

“We knew tyre life was always going to be an issue so our plan was to run at the front as much as we could until we dropped off with the tyre. Unfortunately at the moment there is no way we could conserve the tyre; we can only stay with the group by using all of the tyre and go hard from the start.

“The boys need to work on a plan for that area but I am very, very pleased with how we have got back to our Silverstone ways of riding and into the flow. This is where we should be, in an area fighting for our targets at this point. Our first objective is to find tyre life for consistency and then we will be further forward where we know we are capable of being.”

More, from a press release issued by Kyle Wyman Racing:

LAS VEGAS — The middle of three Wyman brothers made his return to WERA this past weekend at Auto Club Speedway in Fontana, Calif. Riding a next Next Level Cycles Yamaha YZF-R6, Travis Wyman finished in the top 5 in three different Superbike classes.

With his return to the WERA motorcycle road racing series for the first time since 2010, Travis was forced to start from the back of the grid in all three sprint races due to his lack of accumulated points. Wyman was able to work his way through the large field of Superbike riders to finish 4th in A Superstock Expert, 3rd place in Formula One Expert, and 1st place in A Superbike Expert.

“The track was a bit technical and hard to learn at first,” Travis said. “With only 6 laps in each race, it’s kind of hard to get in a good rhythm. I just focused on getting a good start in each of my races and get up as far as possible to hang with those boys on their superbikes. Overall it was an awesome day. No stress, good battles, and I couldn’t be happier to get the guys from Next Level Cycles a win. They work so hard for me, and they deserve it. It was a team effort.”

Wyman is currently 2nd place in the MotoAmerica Superstock 600 championship. He will continue that effort into the final round at New Jersey Motorsports Park in September.

Travis would like to thank his sponsors for their continued support this year:

About Next Level Cycles:

Kyle Wyman Racing (KWR) was formed in 2011 as a motorcycle road racing team focusing on healthy sponsorship opportunities for companies within and outside the motorcycle industry. KWR is the 2012 AMA Pro Harley-Davidson series championship winning team and current partner with Millennium Technologies. For more information visit www.kylewymanracing.com

More, from a press release issued by BMW Motorrad Motorsport:

The BMW Motorrad Motorsport riders were victorious in every series they contested last weekend: Michael Laverty and Taylor MacKenzie won in the BSB, Vincent Lonbois continued his winning streak in the IRRC and Colin Butler rode his RR to victory in Malaysia – The success is completed by further podium finishes.

Munich (DE), 27th July 2016. In the British Superbike Championship (BSB) in Thruxton (GB), in the International Road Racing Championship (IRRC) in Chimay (BE) and in the Malaysia Superbike Championship (MSC) in Sepang (MY): last weekend, the BMW Motorrad Motorsport racers were victorious in every series they contested. In total, they claimed five wins and a further seven podium finishes.

Courtesy of another double win in the International Road Racing Championship (IRRC), Vincent Lonbois (BE) returned back to the top three of the 2016 BMW Motorrad Race Trophy. The Belgian RR rider improved from 17th to third now with 239.55 Race Trophy points. The rankings are still led by Michal Prášek (CZ / AARR STK) with 325.60 points, second place is held by Jordan Szoke (CA / CSBK) with 291.25 points (see full standings below).

For the sixth round of the 2016 British Superbike Championship (BSB), the BMW teams and the experts from BMW Motorrad Motorsport travelled to Thruxton in the South of Great Britain. It turned out to be another successful trip, with wins in the Superbike and Superstock classes.

Tyco BMW rider Michael Laverty (GB) enjoyed a great weekend in the Superbike class (BSB SBK). In race one he stepped onto the podium, finishing second. He even bettered this in race two, when he celebrated his second win of the season on his BMW S 1000 RR. In the championship rankings Laverty improved to fourth. Four other BMW riders claimed top ten results. In race one Richard Cooper (GB / Buildbase BMW Motorrad), Jakub Smrz (CZ / Smiths Racing BMW) and Martin Jessopp (GB / Riders Motorcycles BMW) crossed the line in eighth, ninth and tenth. In the second heat Lee Jackson (GB / Buildbase BMW Motorrad) was tenth.

In the Superstock class race (BSB STK) the BMW riders were once more in a class of their own. No less than eight BMW S 1000 RRs crossed the line in the top ten. The BMW array was led by Buildbase BMW rider Taylor MacKenzie (GB), who celebrated his fourth win of the season. He was joined on the podium by Joshua Elliott (GB / Tyco BMW) in third. Positions four to nine also went to BMW riders: Ian Hutchinson (GB / Tyco BMW) was fourth, followed by Michael Rutter (GB / Bathams SMT), Adam Jenkinson (GB / NEI Motorsport), Alex Olsen (GB / Power Projects Racing), David Johnson (AU / Fleetwood Grab Services) and Chrissy Rouse (GB / CECS / Mission Racing). In the overall standings of the BSB STK, MacKenzie is in the lead ahead of Hutchinson.

Six races and six victories: BMW rider Vincent Lonbois (BE) is the man to beat in the 2016 International Road Racing Championship (IRRC). Last weekend, the third round of the season was held in Chimay in Belgium. At his home round, Lonbois celebrated another double win on his Herpigny Motors BMW Motorrad Belux team’s BMW S 1000 RR and extended his championship lead.

His team-mate Sébastien Le Grelle (BE) was second once more in both races. Didier Grams (DE / G&G Motorsport) also secured a podium finish, claiming third in race one. The successful outing for the RR riders was completed by Patrick Quintens (BE), who was fifth on both occasions, Petr Bicište (CZ / Kimura Racing Team), who claimed two eighth places, and Christian Wiesinger (AT / PSV-Wels Motorsport), who finished ninth in race one.

After a long break, the 2016 season in the Malaysia Superbike Championship (MSC) resumed last weekend with the second round at the Sepang International Circuit near Kuala Lumpur (MY). On this occasion the BMW riders celebrated one win and two further podium finishes.

In the Superbike class (MSC SBK) Colin Butler (CA / AP Racing) took his first victory of the season. Butler won race two after he had already finished second on the podium in race one. Another podium finish for the BMW S 1000 RR followed in the second race of the Superstock class (MSC STK) when Linggam Rammoo (MY) was third. Two more BMW riders secured top ten finishes in the MSC STK: Nasarudin Mat Yusop (MY / BMW Malaysia) was tenth and sixth respectively and Dominic Chang (SG / SportsRider Racing Team) finished ninth in race one.