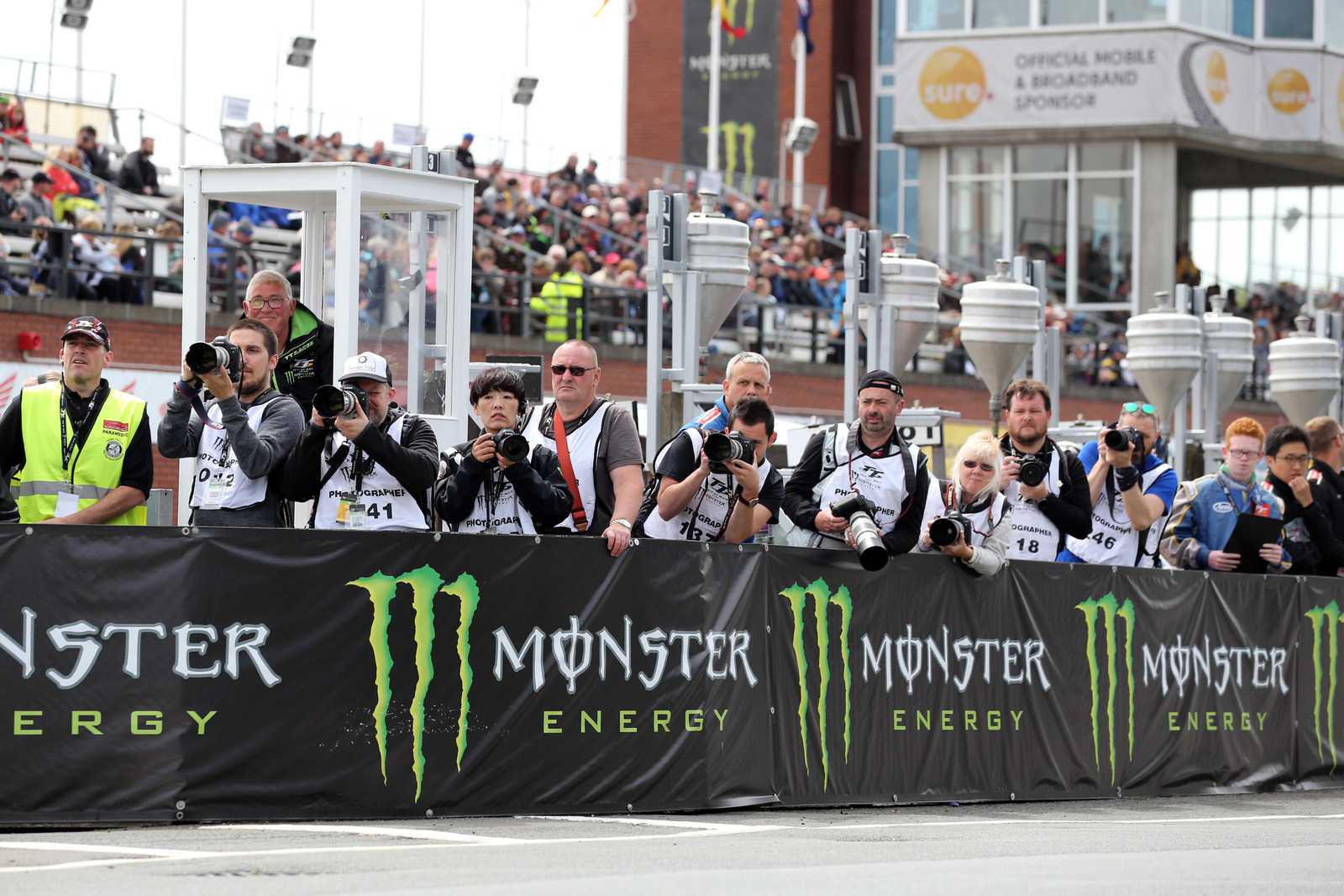 Michael Rutter took his first TT win since 2013, and his fifth in total, when he won Wednesday afternoon’s Bennetts Lightweight TT race at the 2017 Isle of Man TT Races, giving the Italian Paton manufacturer their first ever win around the Mountain Course. He set a new lap record of 118.645mph (1:16.19.324), beating Ivan Lintin’s time for the four lap race from last year.

Rutter took the lead from the beginning of the race and was never headed, eventually beating Martin Jessopp (Riders Motorcycles Kawasaki) by 8.8s with Peter Hickman taking yet another TT podium this week in third, this time on the KMR/IEG Kawasaki.

Rutter led through Glen Helen on the opening lap from his Paton team-mate Stefano Bonetti, the gap just one second with Jessopp only fourth tenths of a second further back in third. 2015 and 2016 race winner Ivan Lintin slotted into third ahead of Daniel Cooper and Hickman.

Passing through Ramsey first time around, Rutter had increased his lead slightly to 3.4s with Bonetti still holding onto second some 2.1s clear of Jessopp. Lintin was a further 2.9s back in fourth as Hickman moved up to fifth ahead of Cooper.

An opening lap of 118.955mph gave Rutter a 4.4s lead over Bonetti but Jessopp was now only one second behind as he looked to better this third place from last year’s race. Lintin was still in fourth but now 4.6s behind Jessopp as Hickman and Cooper maintained fifth and sixth.

Rutter added a further half second to his lead on the run to Glen Helen but it was Jessopp who was now up to second as Bonetti battled on track with Hickman and James Cowton. There was also a change in sixth as Michael Dunlop moved ahead of Cooper.

Coming into the pits for the fuel stop, a superb second lap of 120.362mph enabled Rutter to pull further clear, his lead now 10.5s from Jessopp as Bonetti’s good run ended with retirement at the Creg ny Baa. Lintin had a small advantage over Hickman and Cooper who was now up to fifth as Dunlop dropped back to seventh.

However, a helmet change by Lintin lost him valuable time whilst Rutter also lost time at the pits and, sure enough, through Glen Helen on lap three his lead over Jessopp was down to 2.8s. Hickman moved up to third at Lintin’s expense with Cooper in fifth and Cowton up to sixth.

Rutter immediately responded and almost doubled his lead on the high speed run to Ballaugh, his advantage going back up to 5.4s. Meanwhile, Hickman was now looking secure in third with a gap of over 21 seconds to Lintin but Gary Johnson was out of luck with his second retirement of the day.

At the head of the field, Rutter was pressing on ahead and going into the fourth and final lap, he’d increased his lead to 7.9s and was only a few machines length behind Jessopp on the road. Hickman was over 25 seconds behind in third with similar gaps between Lintin, Cooper and Dunlop but newcomer Adam McLean was forced to retire from an excellent ninth at Ballaugh.

Rutter had no such problems and, circulating with Jessopp on the road, he took the win by 8.8s with the latter securing his second TT podium and best ever result. Hickman’s stunning week continued with his fourth podium from four starts, giving team owner and former race winner Ryan Farquhar plenty to celebrate.

Lintin was unable to make it three in a row and had to settle for fourth as Cooper got his best TT result in fifth with Brookes doing the same in sixth. Riding the second KMR/IEG Kawasaki, he relegated Dunlop to seventh on the final lap with Cowton, Michael Sweeney and last year’s Manx Grand Prix winner Jamie Hodson rounding out the top ten.

More, from a press release issued by Batham’s SMT Racing:

Bridgnorth’s Michael Rutter took his fifth win at the Isle of Man TT Races on Wednesday when he led the Lightweight TT race from start to finish and with fourth place in the earlier Superstock race it completed an excellent day of racing around the 37.73-mile Mountain Course.

Riding the SC-Project Reparto Corse Paton, the 45-year old had high hopes for the Lightweight race, having finished third on the bike in the 2015 race, and he grabbed the lead from the outset, leading by a second through Glen Helen. And with an opening lap of 118.955mph, he held a 4.4s advantage over team-mate Stefano Bonetti going into lap two.

Quickening his pace second time around to 120.362mph, which proved to be the fastest lap of the race, Michael extended his lead at half race distance to 10.5s with Martin Jessopp now in second. However, the Yeovil rider had a quicker fuel stop and by Glen Helen on lap three the difference between the two riders was down to just 2.8s.

With Jessopp having started ten seconds in front of him, Michael could see the gap had reduced but he dug deep and going into the final lap, he’d increased his lead once more to 7.9s. He caught Jessopp on the road and with both riders completing the fourth and final lap in excess of 120mph, Michael came home for his first TT win since 2013, and fifth in total. His eventual winning margin was 8.8s.

Earlier in the day, Michael was in action on the Bathams/SMT Racing BMW S1000RR in the four-lap Superstock race and mindful of the importance of the first lap, he swept through Glen Helen in the lead, his advantage over Ian Hutchinson a solitary second.

His opening lap was 129.057mph but he was encountering arm pump and struggling to hold on to the bike, subsequently slipping back to third. At half race distance, this had become fourth as fellow BMW rider Dan Kneen knocked him off the final podium position but he continued to push and with his final lap being his fastest of the race, 130.220mph, he came home for a comfortable, and fine fourth.

Michael Rutter: “It’s brilliant to win another TT race, especially as I’m getting on a bit now! I hadn’t shown my hand too much in practice but felt confident that the Paton could give me a good shot at the podium and although the Lightweight bikes aren’t the fastest out there, you have to ride them so hard round the corners. I got my head down on the first lap but lost a bit of time at the pit stops so I had to dig deep to pull Martin back and once I’d caught him, we had a lot of fun. You start hearing things and worrying the bike might not last when you get towards the end but it was faultless – I might not understand a word of Italian but the team did a great job.”

“The morning’s Superstock race was tough and I was mindful of not losing too much time on the first lap so had a real good go the minute the flag dropped. I was leading at Glen Helen but my arms started to pump up and I could hardly hold onto the bars. I think I was a bit too tense at the start and maybe too hyped up so I wasn’t relaxing like I should have been. I was holding on to the bars too tight and although the bike was jumping around a bit on the road, it was more to do with me than the set-up. Third could have been ours today but given the issues with my arms, I’m still over the moon with fourth and it hasn’t been a bad day at all.”

Michael’s final race of the week is the six-lap Blue Riband Senior, which is due to get underway at 12.45pm.