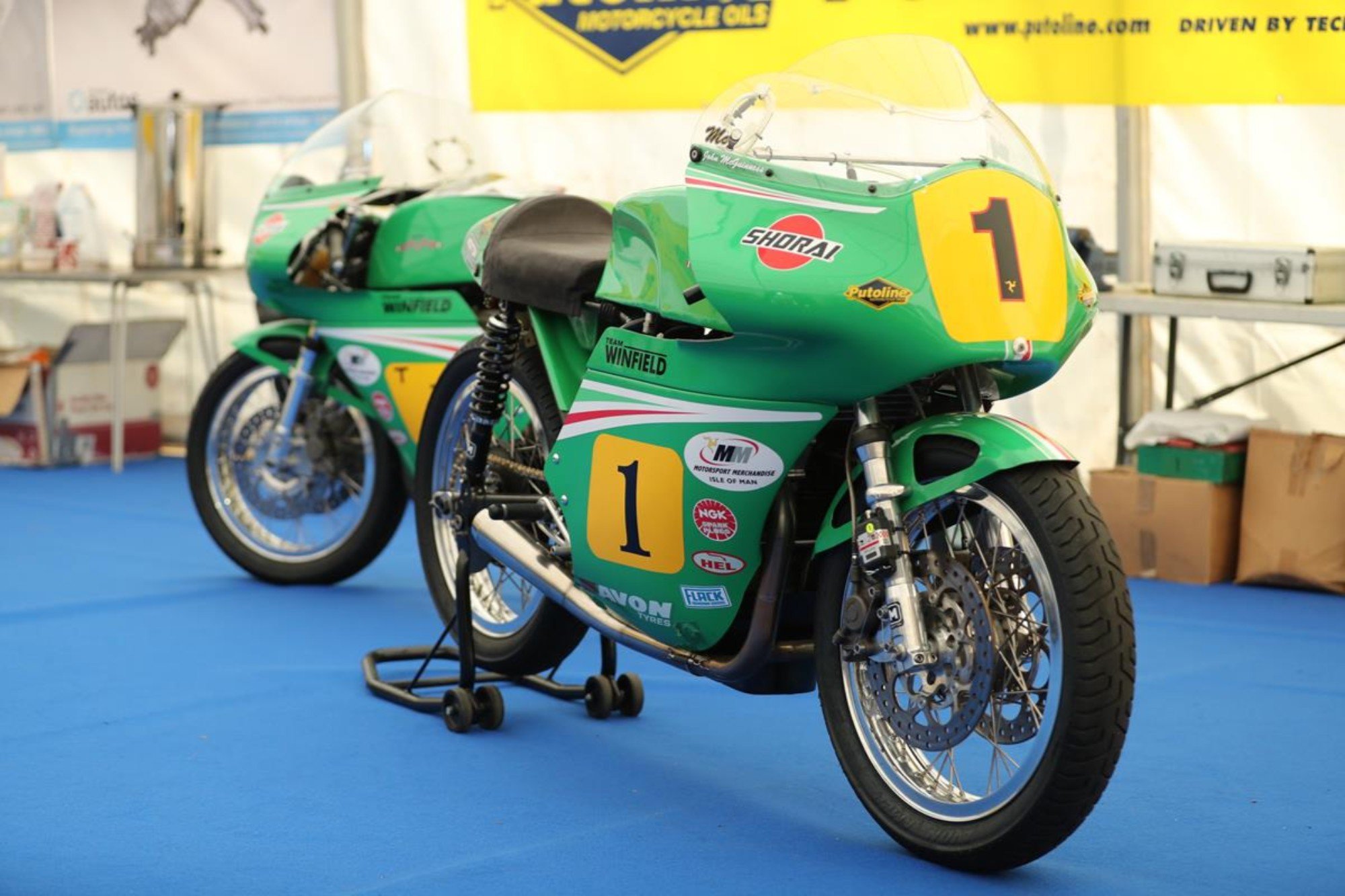 The world’s leading Classic Bike Festival is set to get underway with the first qualifying session for the 2019 Isle of Man Classic TT Races presented by Bennetts due to take place this evening (Saturday 17th August) from 5.20pm (GMT).

Fans from around the world have converged on the Isle of Man for the festival which will feature a week of qualifying followed by two race days – four races – on Saturday 24th and Monday 26th August.

As well as the thrill of seeing the definitive selection of some of the greatest race machines being ridden to their limits as they reverberate around the TT Mountain Course, visitors to the Isle of Man can also enjoy one of the truly great free festival experiences. This year’s free Classic TT paddock entertainment includes pop up iconic bike displays, outdoor screenings of cinema classics and motorcycle themed films, live music from Darrel Higham and the Enforcers, the Smoking Guns DJ sets at the Trackside Bar, a stunt show from the idiosyncratic Purple Helmets as well as bike start-ups and chat shows all based in and around the Classic TT Main Stage and race paddock.

This year’s festival will feature appearances from two of the greatest names in Motorcycling history – Giacomo Agostini who will be parading on his last World Championship Race winning 350cc MV Agusta and Carl Fogarty who is on the Isle of Man as part of the celebration of Steve Hislop’s career.

Ticketed experiences include a live appearance in the VIP Hospitality Suite from the world’s foremost Rolling Stones tribute band the Counterfeit Stones, who will play from the bands extensive back catalogue of six decade defining hits as well as the Live and Uncut chat show featuring TV pundit James Whitham with 23 time TT Race winner John McGuinness and the now sold out RST Classic TT Heroes Dinner with motorcycle legends past and present.

Racing gets underway on the morning of Saturday 24th August with the Bennetts Senior Classic TT Race. McGuinness will start favourite in the 500cc category – going head to head with other leading TT stars as well as a number of classic racing specialists onboard a combination of British single cylinder machines and exotic two, three and four cylinder machines from Italy and Japan.

McGuinness – who won the race in both 2016 and 2018 on Roger Winfield’s Paton – currently holds the class lap record at an average speed of 113.342mph but he will have a target on his back. Dean Harrison on the single cylinder LSS Waste Management Norton, 2014 Race winner Ian Lougher on one of John Chapman’s exotic MV Agusta’s, Michael Rutter on the Ripley Land Matchless which has already seen him lap in excess of 109mph and 2019 TT Privateer’s Champion, Jamie Coward, who has taken second place for the last two years, on the Ted Woof/Craven Manx Norton, could all conceivably stand on the top step.

One of the highlights of the Classic TT Race meeting will be the return of Bruce Anstey in Saturday afternoon’s Dunlop Lightweight Classic TT Race. Anstey – who set the first 250cc 120mph lap on his way to winning the race in 2017 – hasn’t competed on the TT Mountain Course for two years as he has battled serious illness and he will again ride the Honda RS250 for the Milenco by Padgetts Motorcycles team.

Monday’s race programme opens up with the Locate.im Junior Classic TT Race which is set to be one of the most closely contested classes at this year’s race meeting. Honda, with almost 75% of the field on the legendary K4, lead the manufacturer interest.

Last year’s winner Dominic Herbertson, who is one of only five riders to lap at more than 104mph in the class, continues with the Davies Motorsport team who will be confident of retaining the top spot as they also have class lap record holder Lee Johnston in their ranks again. Another Honda rider – Michael Rutter- who won the race in both 2015 and 2017, returns on the Ripley Land Racing Honda.

Monday’s programme also features the Classic Racer Magazine Classic TT Lap of Honour which this year will be lead away by 10 time TT Race winner – and fifteen time world champion – Giacomo Agostini on the MV Agusta that he won his last world championship race on in 1976.

The Classic TT Race meeting finishes on Monday with the Blue Riband RST Superbike Classic TT Race – pre 1992 Superbikes Classics going head to head. Although a strong field has assembled for the climax of the meeting, the race is expected to be a dual between Silicone Engineering Kawasaki rider Dean Harrison, winner of the last two races, and Northern Ireland’s Michael Dunlop on the Team Classic Suzuki GSXR 1100 XR69 machine which he rode to victory in 2013, 2015 and 2016.