How An Article In Roadracing World Led To A Scene In The New Tom Cruise Movie Opening On Friday, Mission: Impossible – Rogue Nation

How An Article In Roadracing World Led To A Scene In The New Tom Cruise Movie Opening On Friday, Mission: Impossible – Rogue Nation 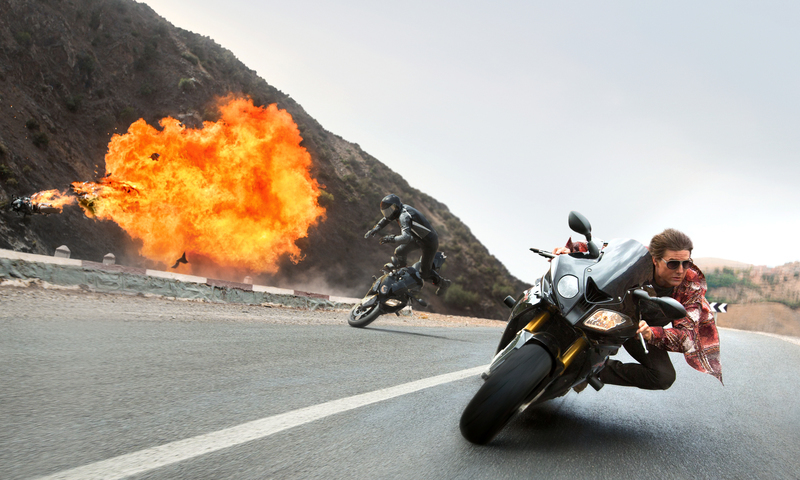 About three years ago we did a “Where Are They Now” article (Roadracing World, October 2012) highlighting how Gregg Smrz went from racing in AMA Formula One national road races in the early 1980s to being one of the top stuntmen, stunt coordinators and second unit directors in the motion picture industry.

Over the years, Smrz has worked on several large projects, from Ghostbusters in 1984 to Back to the Future Part II, Batman Returns, Spider-Man (2002), X-Men 2, two of the Die Hard movies, two of the Men In Black movies, two of the Transformers movies, and Iron Man 3 — just to name a small portion of his movie credits and not even getting into his TV work.

In 1999, Smrz was a stunt coordinator on Mission: Impossible II and worked with Tom Cruise. Smrz and Cruise developed a good working relationship that led to collaborating on several more films, including Minority Report, Knight and Day and Mission: Impossible – Ghost Protocol.

“[Ghost Protocol] was the most fun and the first time I really got turned loose to do what I want to do as far as stunts and stuff,” Smrz said in the original article. “That movie was good in that Tom [Cruise] and I think a lot alike as far as we say ‘go big or go home.’ No matter what I dreamed up they just said, ‘Let’s do it,’ and Tom got real excited about it.”

The original article ended with Smrz saying that someday he hoped “to do a real motorcycle movie. Hopefully, somebody someday will do one, something that’s real.”

We followed up with Smrz and caught him in the middle of what he called a 3000-mile “shakedown” run on his new BMW R1200GS before he rides to Alaska in 2016.

“It’s funny,” Smrz told Roadracing World. “We did that article, and I showed it to Tom. It kicked him in the pants, and they wrote the script around the motorcycle chase. They had me design the chase. Me, Tom and the director [Christopher McQuarrie] worked on it for quite a while. They wrote the story around the chase.”

And when asked if it was going to be “real” and not some distorted exaggeration of motorcycle action, Smrz, the Second Unit Director and a Stunt Coordinator for the film, said, “I got a lot of people mad at me because I just wouldn’t let them do that. Everybody always wants to take it over the top and do the super crazy jump across the highway. You know what I mean? If it can’t be done for real it can’t be in the movie. That’s just how we did it.”

To keep things real and real exciting, Smrz said he recruited French stunt rider and drifter Jorian Ponomareff for the film, and Ponomareff was impressive from start to finish.

“When we went testing, he took a Suzuki GSX-R1000 road racer, no other modifications at all, he went around the racetrack full-lock sideways drifting it in total control. He’s amazing!” said Smrz. “I don’t know if this made the final product, because I haven’t seen it and I don’t know if anyone would notice, but we had a camera mounted low facing backwards across the swingarm and the back wheel of Jorian’s bike. He’s drifting through the back alleys of Morocco. He came out of a corner, leaving darkies on the ground and he slid so close to the wall that he left a black mark on the wall as well.”

Also in an effort to up the realism of the action, Smrz changed the way camera platform vehicles were used to shoot the movie.

“Normally, it is forbidden to go faster than 25 mph,” with a manned camera platform vehicle, said Smrz. “We had big arguments because we had problems with being able to go fast enough with the camera vehicles. Like in racing, weight is your enemy. So we had to throw everyone off the camera cars and go with remote-controlled cameras so the camera vehicle would be light enough to run with the bikes. There was nothing shot at 25 mph…ever. When we were out on the highways the slowest we were going was 100 mph and on the back roads we were doing about 60 mph. It was pretty cool.”

Another key element to the realism of the chase scene was finding vehicles capable of the high-speed action, and Smrz helped direct the producers toward BMW.

“It was going to be a car chase and bike chase,” said Smrz. “So the first thing I said we had to have the BMW M3. They asked why, and I said if you ask any stuntman in the business what is the ultimate car to work with they’ll say it’s the BMW M3. It’s the car that you can buy off the showroom floor and do everything that’s in that movie. You can go drifting. You can go run a sportscar race. You can do anything with that car. The producers were like, ‘Do they make motorcycles?’ I was like, ‘Hell yeah, they make motorcycles!’

“So we went after BMW to sponsor us so we could get the product for free, because it is a lot of money. We went through 20 motorcycles. We requested 25, and we got cut down to 20. It was really difficult to get it down to that number. We had five bad guys and Tom. So that’s six bikes. Well, you need a minimum of two each, so that’s 12 bikes. Then we had the custom-build bikes, the drift bikes, 13, 14, and spares. The numbers just add up. I think we went through 12-15 cars as well. That’s a big number for BMW when you start thinking these are $60,000 cars and the bikes are $15,000 each. But I think BMW is going to come out looking good in the film.”

So after getting the green light to create the motorcycle stunt sequence he’s always wanted to do, Smrz said he’s already thinking of how he can make the next one even better and hopefully continue highlighting motorcycle action in the movies he works on.

“I spent a whole year prepping this thing,” said Smrz. “We designed like five things to shoot this movie that had never been used before, and now we’ve redesigned those prototypes. And I had original chases designed that did not make the movie. So I have a whole bag full of ideas that are going to be in another movie that will hopefully be generated from people really liking this one.

“In a dream world this will bring motorcycles up to the Fast and Furious level in the film business. I think this chase is really exciting. Nobody has ever done anything like this before at speeds like this. Hopefully it will generate a lot more work for bikes.”

See trailers and learn more about the film at www.missionimpossible.com.