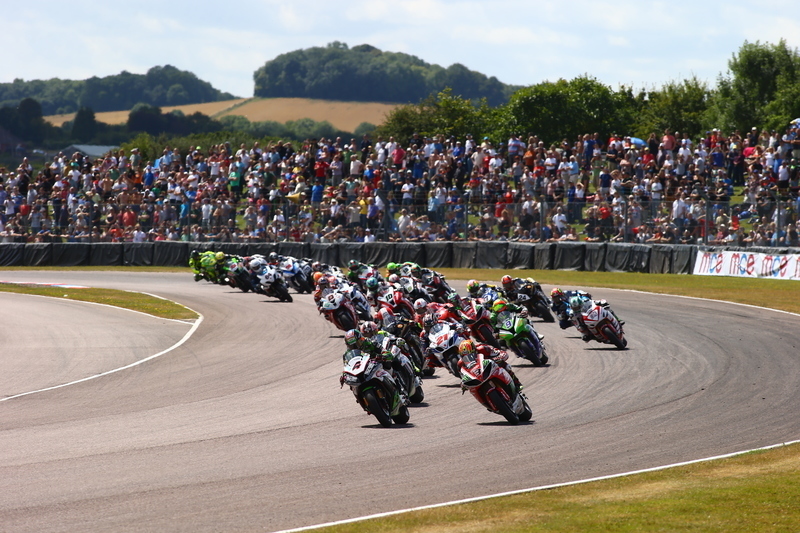 The MCE Insurance British Superbike Championship dogfight hits Thruxton this weekend (31 July – 2 August) and the high-speed Hampshire circuit is renowned for producing some of the closest battles on the calendar as the Superbikes hit top speeds of around 190mph.

Milwaukee Yamaha’s Josh Brookes arrives at the circuit where he claimed a double win last season full of confidence having claimed two victories last time out at Brands Hatch. The Australian has closed the deficit to just five points to standings leader Shane ‘Shakey’ Byrne and he has high hopes for a repeat performance on Sunday.

Byrne spectacularly crashed out at 120mph at the previous round but bounced back to claim a battling second in race two, but the defending champion cannot afford to be beaten by Brookes again this weekend as he bids for title number five with the PBM Kawasaki team.

A number of local contenders though are lining up to bring down the leading pair, and America’s John Hopkins counts Thruxton as his ‘’home’ event as the Californian bases himself in Portsmouth during the UK racing season. ‘Hopper’ has been called up for a second consecutive round with the Hampshire based Lloyds British Moto Rapido Ducati team, having scored their best finish this season with a sixth place on his debut with them at Brands Hatch.

Tommy Bridewell returns to British action after racing in the Suzuka Eight Hour Endurance race last weekend and the Devizes-born protagonist is hungry to return to the podium this weekend, having scored a single race win at Oulton Park in May. However with five different race winners and a further three riders claiming podium finishes from the first six rounds, it isn’t an easy feat to succeed in MCE BSB!

The Bournemouth-based Quattro Plant Kawasaki and Salisbury-based Gearlink Kawasaki teams also have high hopes for their home round.

The Thruxton round is presented by JG Speedfit who also title sponsor the GBmoto team, who will be pushing to return to the top step this weekend. James Ellison was back on the podium at Brands Hatch in the previous round after battling back from breaking ribs in a crash at Snetterton in June and is ready to add to his tally of three wins this season.

Meet the riders in Southampton this Thursday!

As MCE BSB gears up for the fastest round of the season at Thruxton, fans will get the chance to get up close to the machines and riders in Southampton’s West Quay Shopping Centre this Thursday (30 July).

Throughout the day many leading Superbikes will be on display including the local Lloyds British Moto Rapido Ducati, Quattro Plant Kawasaki and Tsingtao MV Agusta teams plus a Be Wiser Kawasaki.

From 14:30 – 15:30 you will also be able to meet some of the MCE BSB contenders ahead of their first on track sessions at the Hampshire track on Friday including John Hopkins, Tommy Bridewell, Luke Mossey, Howie Mainwaring and Lee Jackson, plus Danny Buchan and Chris Walker.

James Ellison and James Westmoreland will also be meeting fans ahead of the JG Speedfit presented fastest round of the season.

Fans will be able to purchase tickets for the Thruxton round throughout the day at the display located on the ground floor adjacent to the Marks and Spencer and GAP stores. If you book your tickets on Thursday you will also be entered into a free prize draw to win a raceday pillion lap of the track with JG Speedfit.

“I love going to Thruxton every year, it’s one of those tracks that’s fun, fast and something to look forward to. To come from a track like Brands Hatch where we had a double win, to one like Thruxton has given us confidence already, so hopefully things will continue into this weekend.

“We have had more consistency this season and I think that comes from the bike as that is a big improvement on last year, but equally the team is working better too. There have been many developments made to the bike so I am expecting to have a great battle at the front.

“I am really looking forward to Thruxton, especially on this bike as the characteristics should suit Thruxton as its fast and flowing track – with the power delivery and stability of the chassis I believe will be in a good position..

“The team have a good set up there from last season and even at Brands Hatch I was surprised at how little we needed to change the Ducati so I imagine that will be the same for Thruxton. We also have some new parts to test next weekend so that’s exciting too and I am over the moon with how it went at Brands Hatch so that is a real confidence boost before Thruxton.

“The first race last weekend was really good and if you look at the times, to finish the first race less than five seconds from the race winner and have the podium riders in sight, was a really good start. I think to be pushing for the top five at Thruxton isn’t that farfetched at all. We want to go into the weekend straight away and be fighting for that position. I will be grasping this opportunity at Thruxton and pushing as hard as I can with the team to improve on what we had at Brands Hatch and put on a good show for the fans.”