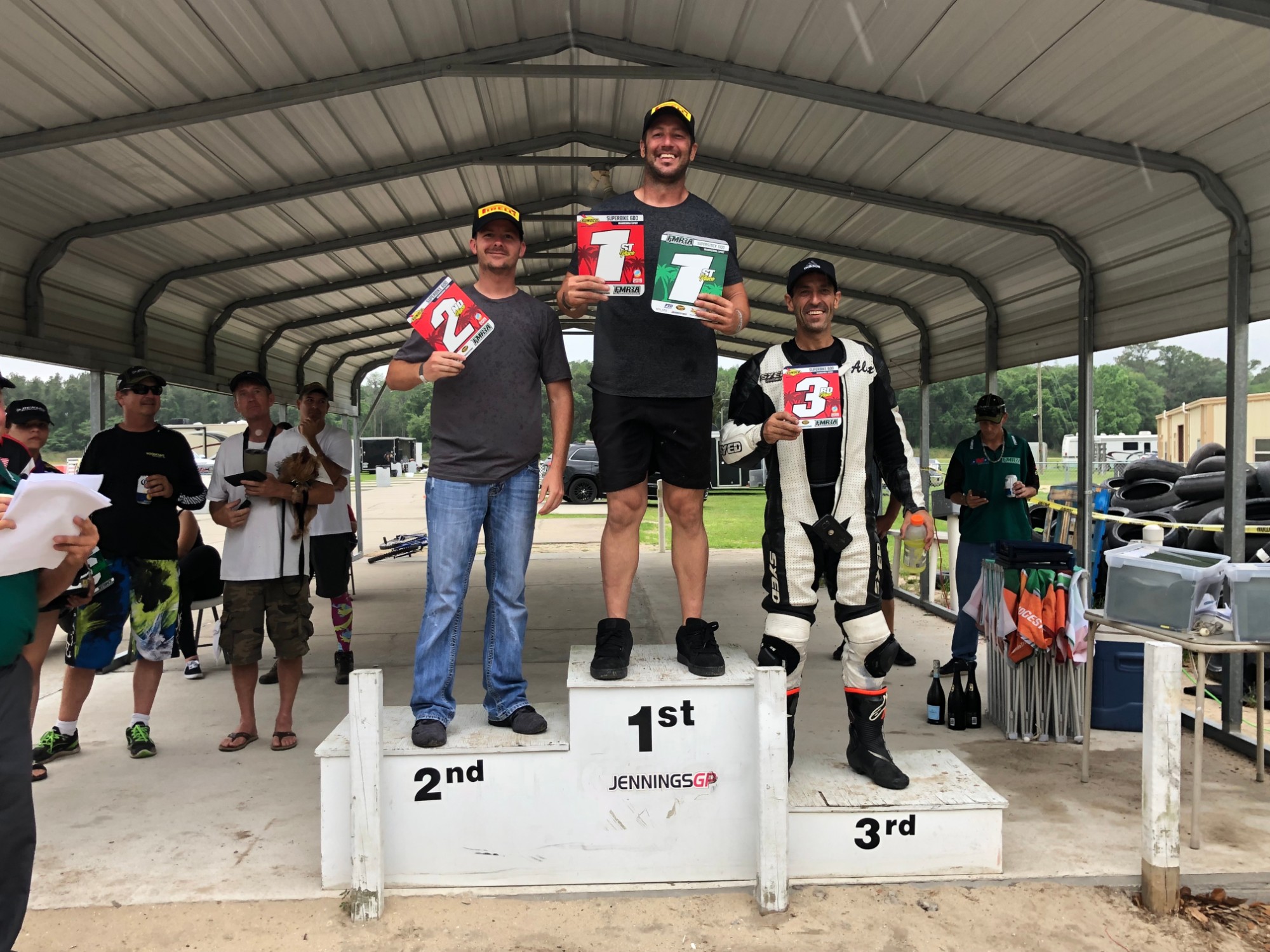 Nearly 100 racers descended on Jennings GP, in Jennings, Florida, this past weekend for Round 5 of the Florida Motorcycle Road Racing Association’s 2019 season, the track’s only annual sanctioned racing event.

Sunday’s first race kicked off with the SuperStock 600 Grande Corsa. Driving down from Carolina Friday night, Chuck Ivey started from the pole with only a 0.017 gap over Christian Miranda from qualifying. Miranda took the lead early in the first lap and opened up a gap while an intense battle played out between Experts Ivey, Jamie Starace, and Dan Spaulding for second. In the first six laps, William Wend led the Amateur contingent while Dustin Richards and Frank Custureri swapped position lap after lap for second. Custureri ultimately passed Richards in lap seven and gained a lead to the finish line. Miranda secured the Expert win followed by Ivey and Starace. William Wend led the Amateurs through the checkered flag with Custureri and Richards in tow.

The SuperStreet 300 and Moto3 Grande Corsa saw twenty stock and modified lightweight machines take to the grid with Kayla Yaakov starting on the pole. Brian Robbins and Zane Lefko picked their way through the field and started a multi lap battle for the fourth position in the opening laps. Young, but experienced, Alexis Olivera took advantage and moved around the two for the third position on lap four. Starting in lap seven, Dustin Richards picked up momentum and pushed his way through the field from eighth to fourth position over the next few laps. Yaakov took the checkered flag followed by Amateur Eric Watts and Expert Alexis Olivera for the overall top three. Luis Collante conquered the SS300 Amateur field followed by Thomas Keith and Jerry Pellegrino.

Sean Dwyer started from the pole in the SuperStock 1000 Grande Corsa and led a decisive victory over the field showing his talent and innate familiarity of the track at Jennings GP. Alejandro Nieves stood out in winning the Amateur field while taking second place overall. Dwyer took the Expert win joined by Alex Irzyk and Shannon Andrus on the podium. Nieves celebrated his performance in the victory circle joined by Amateurs Andy Vanbilliard and Daniel Gourley.

The Superbike 600 Grande Corsa saw Sean Dwyer again starting from the pole. While Dwyer set a series class track record with a 1:19.218, Daryan Martin and Alejandro Rei went at it in the final laps neck to neck. Martin ultimately took the win across the line by only a .384 margin putting on a great show to the cheering crowd in the pits. Only a few seconds behind the Experts, Dustin Richards took the Amateur win followed by William Wend and Richard Falcone.

In the Twins Grande Corsa, Kayla Yaakov started from the pole. Losing a few positions after launch she quickly put her head down and regained the lead in the first few turns, subsequently setting a series class track record with a 1:22.246 in Formula Twin Expert and taking the overall win. The young Blake Davis had an impressive first showing with the series in his first appearance and claimed the Production Twin Expert victory over Al Smith and Carl Cohen. Meanwhile, Yvette Lamar took the Formula Twin Amateur top step on the podium joined by Hurricane Racing teammate Don Dufresne. The Production Twin Amateur field saw Thomas Hannigan narrowly beating Kevin Greimel by 0.456 seconds, with Gabriel Figueroa joining the two celebrating on the podium after ten laps battling.

Christian Miranda started from the pole in the Sunoco SuperBike 1000 Grande Corsa feature race. Not one to let the starting position be a deciding factor, Sean Dwyer picked his way through the front of the field and took home the overall victory followed by Miranda and Alex Irzyk. Alejandro Nieves, Alban Bonilla, and George Vazeos Jr took the Amateur podium.

After lunch, the SuperStock 600 Sprint saw Chuck Ivey coming back with a vengeance from the morning Grande Corsa. Ivey held a dominant pace with Christian Miranda taking a wheel over him a few times but unable to make it stick. Ivey ultimately took the victory followed by Miranda and Jamie Starace. Dustin Richards took an impressive .024 second win over Patrick Plowman in the Amateur field followed by Thomas Hannigan in third.

Sean Dwyer secured a big victory in the SuperStock 1000 Sprint by opening a large gap early on in the race. In a surprise shakeup, Amateur Alban Bonilla took second overall followed by a close finish between Alejandro Nieves and William Wend in class. Experts Shannon Andrus and Joshua Marino joined Dwyer on the podium.

Alejandro Rei continued his domination of the 2019 Formula40-1000 field in the six lap Sprint. Not far behind Rei, George Vazeos Jr eeked out a 0.138 victory over Christopher Dooley for the Amateur lead. The two were joined on the podium by Gabriel Figueroa.

The spec-tire Bridgestone Cup witnessed a powerful showing by Shannon Andrus leading the field of Bridgestone-shod bikes across the checkered flag by a huge 33 second margin. Odane Allen joined Andrus on the Bridgestone 1000 podium, while Kevin Soltis took the Bridgestone 600 win over German Vacca and John-Paul Craig.

Steven Breckenridge took his second victory for the day in the Twins Sprint, while a repeat of the morning’s Grande Corsa took place in Thomas Hannigan narrowly beating Kevin Greimel across the line by 0.414 seconds for second place followed by Sam Purkis in the Production Twin Amateur field. Blake Davis and Michael Norman joined Breckenridge on the Production Twin Expert podium in second and third. Jon Foy took home top honors in the Formula Twin class.

The Formula 50-1000 Sprint displayed some incredible racing between Alejandro Rei and Michael Rouleau who took the checker only split by 0.157 seconds with Rei narrowly grabbing the gold. German Vacca joined the two on the Expert podium in third place. John Sackett was less than a second behind Vacca securing the Amateur victory followed by Stuart Zuckerman and Kurt Peterson.

Daniel Spaulding bested Daryan Martin by 0.734 seconds in the Sunoco SuperBike 600 Sprint and took home the gold in his first FMRRA series appearance. William Wend had planned to run the SuperStock 600 Sprint but after missing the call, joined the SuperBike race. He made it count taking home the Amateur victory over Richard Falcone and Dustin Richards.

The last race of the day was the Sunoco SuperBike 1000 Sprint. Alejandro Rei secured yet another victory besting Joshua Marino and Shannon Andrus for the Expert win. Patrick Plowman, Andy Vanbilliard, and Alban Bonilla made up the Amateur podium for the feature class.

Florida Motorcycle Road Racing Association heads south to Homestead Miami Speedway for Round 6 on May 18-19, bringing competitive road racing back to the circuit for two rounds this season.

FMRRA thanks all of our 2019 sponsors for their support of our passionate racers and the sport. Our Sponsors, Racers, and Fans make it possible to continue to deliver professional, safe, and fun race weekends to the South Eastern motorcycle community

Podcast: How Cody Wyman Got Very Busy In 2022