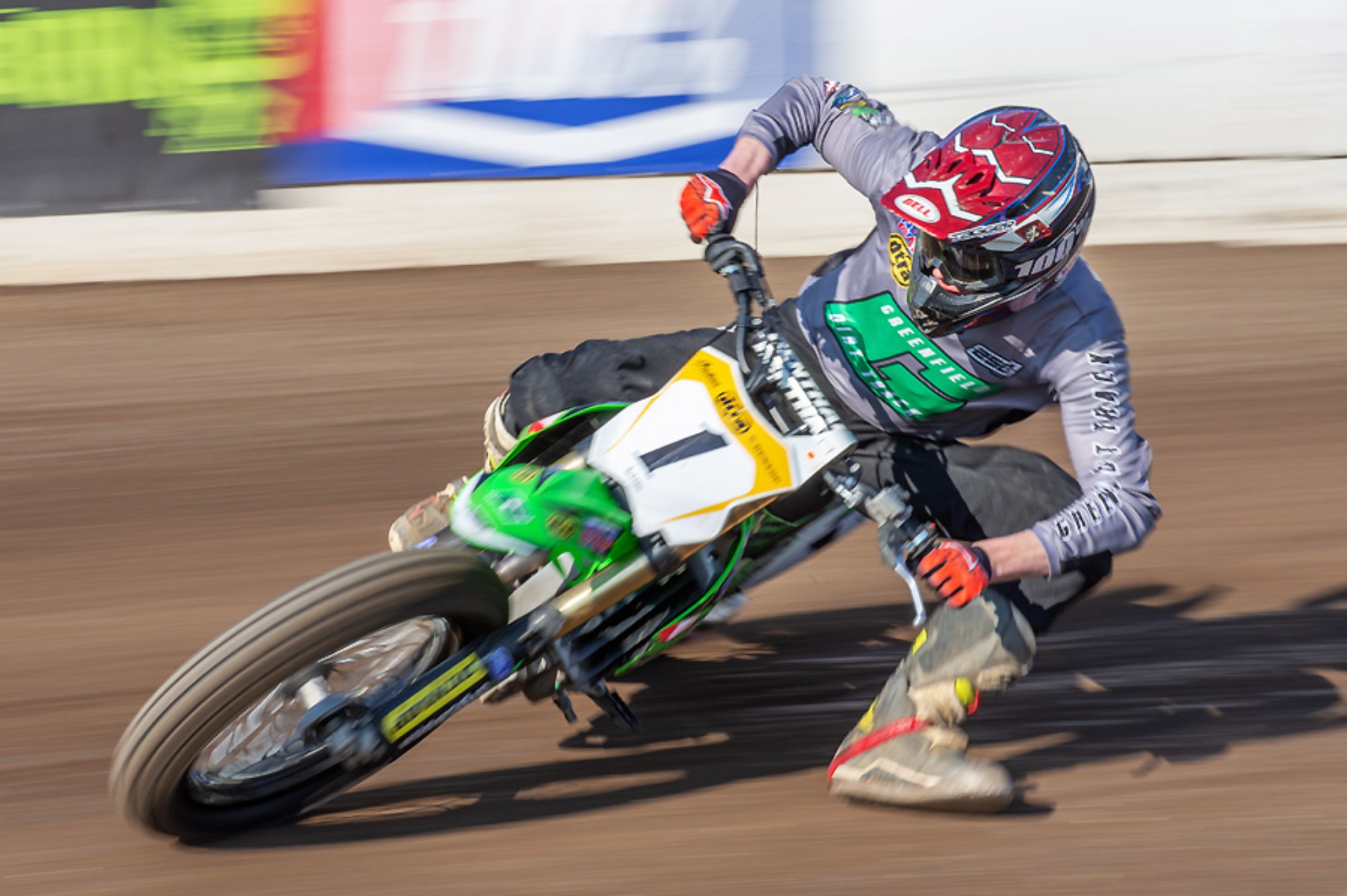 The Greenfield-Noyes Camp team, directed by George Pickering, showed great potential in the inaugural event of the prestigious Indian Motorcycle Flat Track Nationals, presented by the DTRA at Kings Lynn and held on April 13 and 14 at the Adrian Flux Arena circuit at Kings Lynn (Norfolk, England).

The three riders of the Anglo-Spanish team on their green Kawasaki KX450F machines occupied the top three positions in the qualifying with the best time for young Ferran Sastre in his first international ride. Only six hundredths of a second back of Sastre was Gerard Bailo (Spain’s Rodi Cup Champion in 2018) and with the team’s British rider, Toby Hales (DTRA PRO Champion in 2018) third just four one-hundredths back of Bailo.

Hales, Bailo and Sastre won their respective heats and Spaniard Franc Serra, DTRA’s guest rider, also on Kawasaki KX450F property of Greenfield qualified for the semi finals with a win in his heat.

In the two semis, Hales won the first over Serra and the British Rob Mear and in the second of the two semis Sastre edged Bailo with Brit Gary Birtwistle third.

The final went to Birtwistle, from Team Evolve on his CRF450, by seven tenths of a second over Bailo and with only 2 seconds covering the tight leading group of Britwistle, Bailo, Sastre and Serra.

The British Championship consists of seven events and the next one will be the MCN Festival, May 17-18 in Petersborough, sponsored by the Motor Cycle News. The Greenfield-Noyes Camp team, before the second round of the British series, will participate in the initial round of the European Championship, the “Hells Race” in Lelystad, Netherlands, on May 4-5.

George Pickering – Team Owner: “It was a successful first round for Team Greenfield-NoyesCamp. Making his UK racing debut #215 Ferran Sastre was on fire in qualifying, consistently topping the board with his fastest a 16.643. Gerard Bailo following closely by qualifying second fastest with a 16.704 behind him Toby Hales qualifying at 16.745, with all three riders winning their heats and Toby and Ferran each winning a semi. This placed all three riders on the front row. After a promising start though Hales went down early on while leading. Gerard and Ferran finished 2nd and 3rd respectively, behind Gary Birtwistle. A great first ever ride in the UK for Ferry and it’s great to see Gerard on race form again. The team is off to a promising start, as our youngest rider Thomas Hunt, also scored first place in the 85cc category.”

Gerard Bailo #17: “This was a very good start. I had a lot of problems early on, although I won my heat and I was second in the semi. In the final I started fourth and had a good pace. When Toby fell right in front of me, I moved into second and was catching the first but I made a couple of mistakes and, since the championship is long, I preferred to ensure the 20 points. We started better than last year and I think our level is higher than in 2018. I want to congratulate my colleagues for their results and thank my team for their support.”

Ferran Sastre #215: “I had a great time in a great environment that has made me see the races in a different light. This was very good circuit, different from what I have known so far. I’m happy to have been the fastest in qualifying and to have won my semi. In the final the track had changed a lot…very dry. Even so, I felt I had a shot at winning, but I lacked traction in the exits of the corners and it was very difficult for me to overtake. For a first contact with the championship, this was a very positive start with a very good bike and good support from the team and my mechanic, Toni. This is just the beginning and with a podium. I am really looking forward to returning to try to do better in the next round of the British Championship.”

Toby Hales #1: “It started better than it ended. I qualified 3rd to start with, so I got first pick in my heat race and managed to win the race, and then I won my semi which gave me first pick for the final. I got a very good start in the final and was running in the lead for the first two laps, but then fell off, so when I got back on I was at the back just playing catch up.”