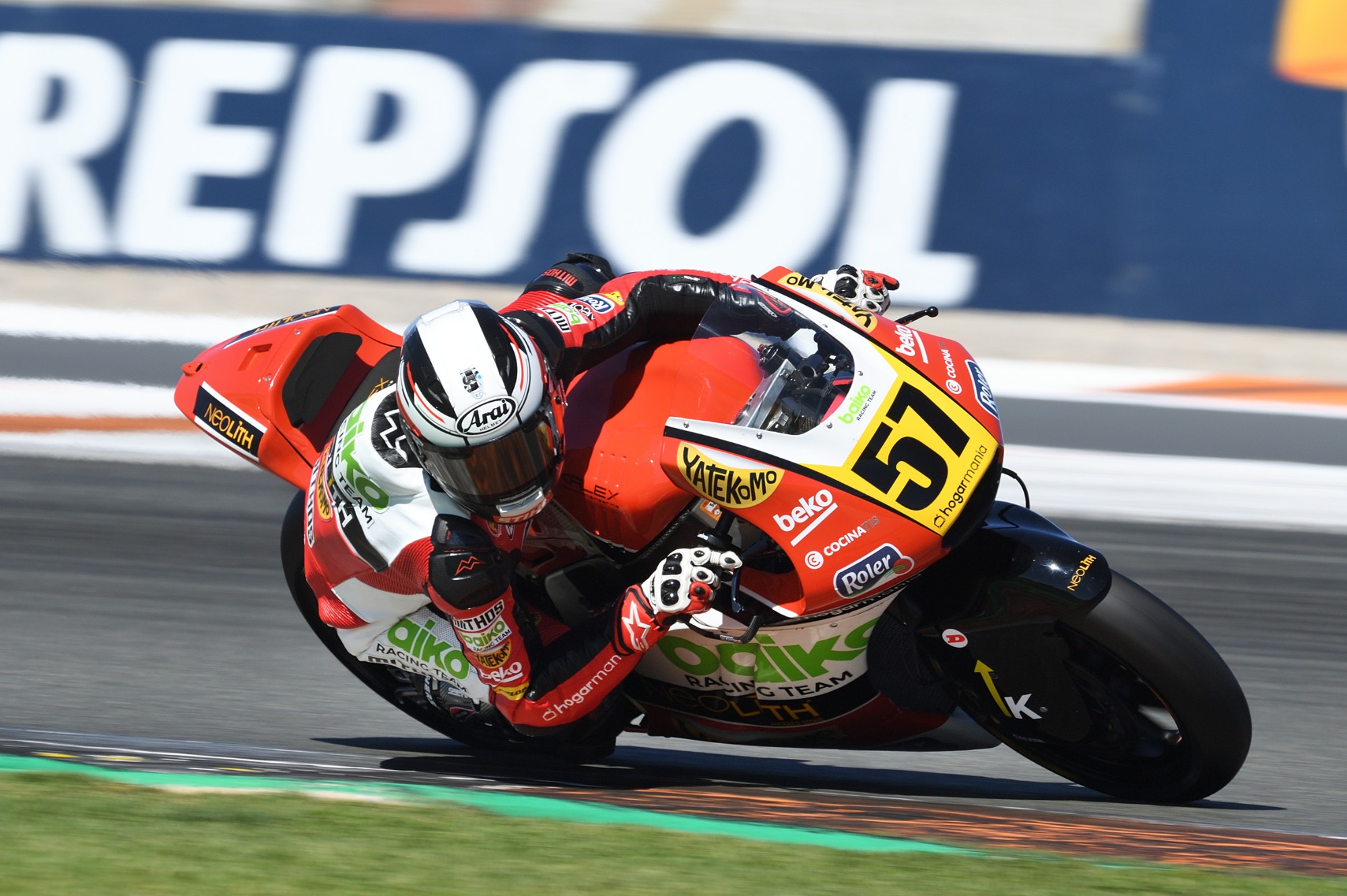 Race Results (all on Dunlop tires):

Championship Point Standings (after 3 of 11 races):

Valencia thrills to the second round of the FIM CEV Repsol

The second round of the FIM CEV Repsol this weekend at the Circuit Ricardo Tormo in Valencia did not disappoint and provided some thrilling racing. Yuki Kunii (Asia Talent Team) and Ryusei Yamanaka (Junior Team Estrella Galicia 0.0) shared the victories in the FIM Moto3™ Junior World Championship, with Edgar Pons (Baiko Racing Team) in Moto2™ achieving his first victory of the season, and Izan Guevara (Cuna de Campeones) taking a double win in the European Talent Cup.

With five laps to go and holding on to second place, Öncü was forced to retire due to mechanical problems leaving Kunii to take his second victory in the FIM CEV Repsol. Alcoba passed Davide Pizzoli (Leopard Impala Junior Team) on the last corner to take second after joining the chasing group in a great comeback. The Repsol free fuel cheque went to Kunii as the winner of the race.

Kunii led for much of the race, but on the last corner Yamanaka passed him to take the flag, with Holgado finishing third ahead of Artigas, Viu and the other members of the group. Yamanaka took the Repsol free fuel cheque as race winner. Kunii is the new leader of the category by a single point over Artigas; third is Baltus tied on points with Alcoba, only four behind the leader.

Edgar Pons had a brilliant weekend in Valencia, dominating the qualifying practice sessions, setting the fastest lap time in the race, securing his first victory of the season and ending up as overall leader of the Moto2™ European Championship. The race was stopped after a multiple fall involving Niki Tuuli (Team Stylobike), Matteo Ferrari (Gresini Laglisse Academy) and Alessandro Zaccone (Promoracing), which was caused by a trail of oil left by Marcel Brenner’s machine on the first lap.

The Moto2™ race was restarted but without the injured Tuuli on the grid. Once again Pons took the lead followed by Héctor Garzó (CNS Motorsport). The two pulled away followed by the Team Ciatti Speed Up riders Tomasso Marcon and Yari Montella with Miquel Pons (H43 Nobby Talasur-Blumaq) behind. The race ended in this order. Joan Díaz (DCR Racing Team) was the best in Superstock 600 and is the leader of the category. Pons received the Repsol free fuel cheque.

In the ETC, Izan Guevara secured a double win. In the first race his victory was even more noteworthy because after setting the best time in the qualifying session he was penalized for riding slowly in five sectors, and ended up starting from the fifth row. Fermín Aldeguer (Bester Capital Dubai), who also started down the grid – in this case in the eighth row – finished second. Dirk Geiger (Kiefer Racing) was third.

From the start Geiger took first followed by Daijiro Sako (Cuna de Campeones), Lorenzo Fellon (ZF GP School), David Muñoz (Jerez Andalucía MT) and others. On the fifth lap Fellon was penalized with a ‘long lap’ for repeatedly exceeding the limits of the track and lost his chances of a podium finish. Guevara, Aldeguer, Sako, Geiger and Daniel Muñoz (Oneforex Cardoso School) formed the group that was going to fight for victory. Daniel Muñoz touched Aldeguer from behind in the closing stages of the race, left the track and was out of contention. In the end, Guevara won followed by Aldeguer and Geiger with Sako unable to grab a podium slot. The Cuna de Campeones rider was awarded the Repsol free fuel cheque.

All the results and information about the Championship are on the official website: www.fimcevrepsol.com