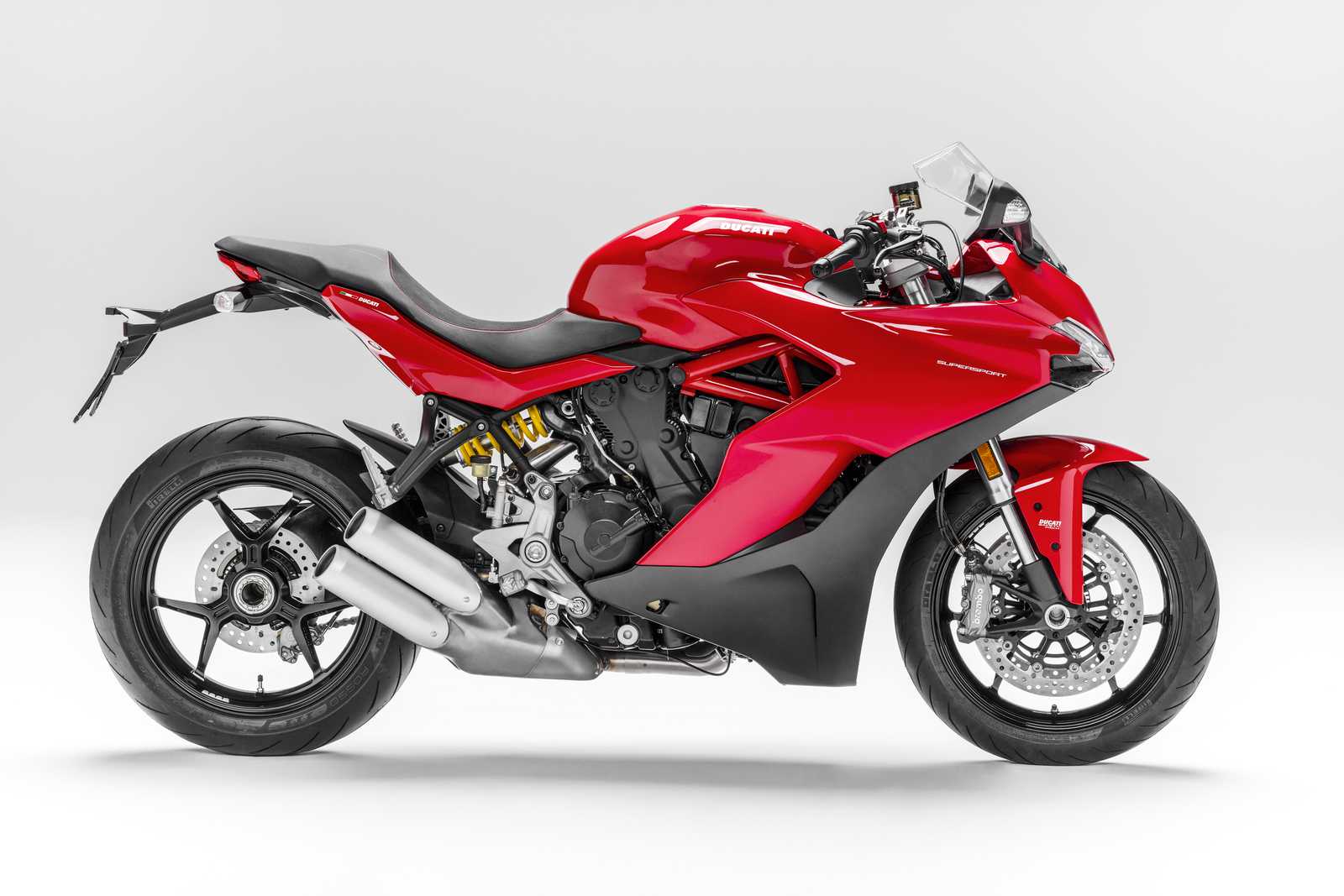 Cologne (Germany), October 4, 2016 – Ducati took advantage of the special press-only day at INTERMOT 2016 to unveil the first of a series of new bikes for 2017. At the Cologne motorcycle fair, Ducati CEO Claudio Domenicali took to the stage to present the SuperSport, the company’s latest sport motorcycle

“I’m extremely proud to be able to reveal the latest Ducati 2017 bikes, starting with the SuperSport”, stated Ducati CEO Claudio Domenicali at the bike’s unveiling. “After sharing a sneak peek with the Ducatista community at WDW 2016, we’re ready to present the bike to the thousands of enthusiasts who had eagerly awaited a sport bike capable of ensuring both fun and comfort, even in everyday riding situations. Expert riders will appreciate the true sports personality of the SuperSport, its excellent road performance and apparent penchant for journeying and everyday use. Riders approaching the Ducati sports world for the first time will discover versatility, easy handling and, above all, the very essence of sports riding as Ducati sees it.”

Mr. Domenicali is looking forward to EICMA 2016: “Next month, during the Ducati World Première – held on November 7, and streamed live across the globe – we’ll reveal the other bikes being launched by Ducati this coming year, thus completing the range and, we can confidently say, meeting many of the needs and wants of the riders in our community, as well as those who, thanks to these latest machines, will soon be joining it”.

The Ducati SuperSport is designed for those who want a sport-inspired bike that still provides comfort and easy handling on everyday roads. A fun bike that’s versatile and accessible, with the style and soul of a real Ducati thoroughbred.

A lean and mean road machine with a decidedly approachable feel thanks to easy handling, the confidence-inspiring Ducati Safety Pack (Bosch ABS + Ducati Traction Control), the awesome price-quality ratio of the equipment and the long maintenance intervals.

Powering the SuperSport is a twin-cylinder 937 cm³ Testastretta 11° engine, delivering 113 hp and a full yet linear torque curve. Thanks to the three Riding Modes (Sport, Touring, and Urban), the SuperSport’s temperament can be adapted to maximize enjoyment whatever the riding conditions. Agile on city streets, comfortable on the motorway and superlative on twisting country roads, the SuperSport is super-versatile. Relaxed rider and passenger positions, good airflow deflection from the height-adjustable screen and the mileage provided by the 16-litre fuel tank also make the new Ducati SuperSport a cool companion on medium-distance rides.

The new SuperSport is displayed on the Ducati stand (Hall 8 Stand A42/50) together with other new 2017 bikes such as the Monster 821 EURO 4, now available in the new “Dust Grey,” and the Diavel EURO 4. Other all-new developments include the “Volcano Grey” color for the Multistrada 1200 S, on which technical upgrades have been introduced, and the 1299 Panigale, which now features a new EVO electronics package featuring Ducati Traction Control (DTC) and Ducati Wheelie Control (DWC).

More, from another press release issued by Ducati:

Ducati Scrambler at INTERMOT 2016 from October 5 to 9

Cologne (Germany), October 4, 2016 – Two years after the brand’s official launch in Cologne in 2014, Ducati Scrambler will play a starring role at the 2016 edition of “INTERMOT – International Motorcycle, Scooter, and E-Bike Fair,” from 5 to 9 October in Cologn Germany.

Complimenting the current range, the Ducati Scrambler Land of Joy is back with its unmistakeable yellow containers. This time packed with plenty of exciting developments: several new accessorized designs based the Icon and Sixty2 models, the Artika special (built by Dario Lopez Studio) and the Revolution special (a Ducati Scrambler Sixty2 in pure bobber style built by Officine Mermaid).

At INTERMOT 2016 – the Ducati Scrambler will be a hub of fun, involvement, and innovation. This year’s Intermot will see the brand present an all-new Virtual Reality experience: visitors can don VR visors and plunge into a new world on a Ducati Scrambler Icon. After setting up the bike and riding through woods, across deserts and along country roads, they’ll be able to send themselves a souvenir photo of the experience.

Another first from Ducati Scrambler at Cologne will be Radio Ducati Scrambler. Music has always been an essential feature of the Land of Joy – so a radio station is a brand must-have for the future.

One of the containers converts into a studio from which the new official radio station will broadcast, beaming live on the Ducati Scrambler Facebook page www.facebook.com/scramblerducati/ at the following times:

At Cologne, the Land of Joy will also launch two new worlds that, respectively, evoke the ambiance of the 1960s Café and the atmosphere of the Californian desert: in their colors, smells, and even their soundtracks. Hints, perhaps, at new developments for Ducati Scrambler 2017?