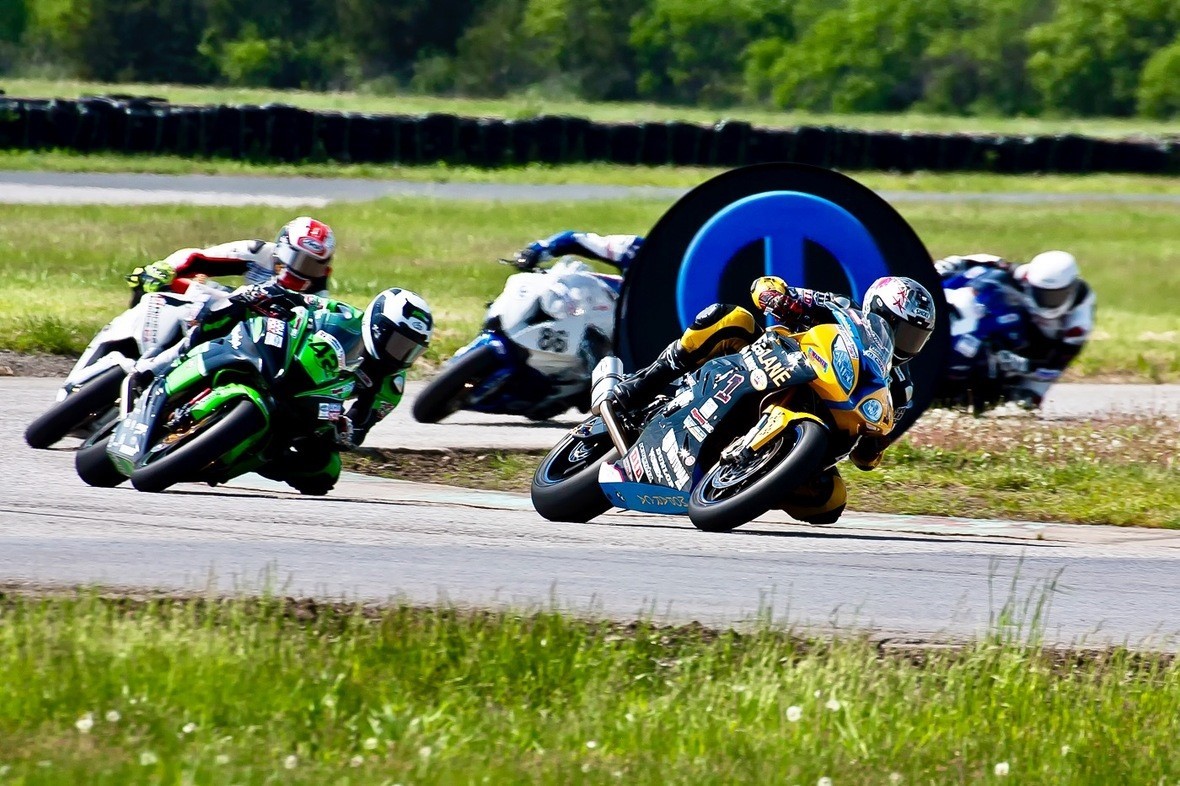 Mother Nature gave the paddock full of racers limited track time to practice and set up their new machinery for 2017. Szoke is very familiar with his BMWS1000RR livery and his strict training regime throughout the off season prepared the 11 time Canadian Superbike Champion well for the weekend.

“Under the circumstances and given the track conditions, that was a really good lap time and it was really competitive all through the top ten.” Says Szoke. The top six riders were less than a half a second apart during the competitive top ten 15 min SuperPole session.

The 22 lap race scheduled for Sunday was greeted with sunny Canadian skies. Szoke snatched the lead just before the half way mark and won the race to the checkers with a commanding 4.056 gap against the rest of the field. This is Szoke’s 15th Pro Superbike victory in Canada’s premier class, not having been beaten since 2014.

“Everybody’s taking it 100 percent seriously, and we’re running at a very high level of competition, and that’s what I’m here for,” Szoke added. “I feel great. I’m comfortable. I feel like I have nothing to prove like when you’re younger, so I’m just trying to enjoy it, and it’s taken a bit of pressure off me so I can focus on riding well.”

Szoke now leads the Mopar CSBK standings headed into Round 2 on June 9 – 11 at Grand Bend Motorplex.

More, from a press release issued by Statoni Racing:

May 26-28, Shannonville Motorsport Park saw the opening round on the 2017 Canadian Superbike Championship. With poor track conditions on Thursday the time was used to address some teething issues on the BLKRDR by Motovan/FTR Honda CBR600RR. “I can’t thank Pat Milligan and Peter Soame enough for all the effort and long hours to prep the bike. We were a little late putting our program together this year but fortunately most of the kinks were ironed out for Friday practice.”

The weather had improved on Saturday but Stacey was still struggling for pace. The qualifying goal was the first two rows and that was mission accomplished with 7th spot on the grid for the Liqui Moly Pro Sport BikeSport class. She was not able to improve her times in Mopar Pro Superbike qualifying, unfortunately picking up an injury.

Race day warmup did not go to plan and Stacey was forced to sit out the Superbike warmup session to get fit for the afternoon races. In the Liqui Moly Pro Sport BikeSport race Stacey got a good start and was in 5th place into turn one. She had a few battles and was holding down 8th position for the first half of the race before a rider error saw her take the slip road off the back straight. She rejoined in 11th. Despite some last minute setup changes that did not work out, Stacey was still able to ride around it and improve her lap time from qualifying. She decided to sit out the Mopar Pro Superbike race. “Thank you to Doc Walker for the medical advice. Thanks too to Jon Cornwell. This opening weekend was certainly challenging but we worked hard and didn’t give up. We will take the positives and move forward to the next round at Grand Bend”.

There was some further good news to end the day. R&M Electrical (Burlington, ON) return as a sponsor this year. Thank you Mike Rixon. Thanks to Honda Canada for providing a set of tires to each of the Honda riders this weekend. The icing on the cake was Autumn and Jaret Whiteside buying us some tires and dropping them off to our pit. “This really put a smile on my face. At the end of the day we are a privateer team. Forensi Tech Racing is supporting us with bike preparation and Motovan through their BLKRDR program. We are grateful for any and all support we receive”.

Support for this round: BLK RDR by Motovan, FTR, R&M Electrical

To keep up to date on Stacey Nesbitt, visit her social media at;

More, from a press release issued by Ben Young Racing:

YOUNG ON PACE AT CSBK SEASON OPENER AT SHANNONVILLE

Collingwood, ON CANADA – MAY 30, 2017 – The 2017 MOPAR Canadian Superbike Championship (CSBK) season launched this past weekend at Shannonville Motorsport Park (SMP). The Superbike Challenge presented by the Trenton Military Family Resource Centre featured a formidable cast of competitors. Hungry to fine-tune his pro rookie success in 2016 Ben Young quickly got up to speed despite limited track time taking home his first podium of the season with a third-place finish.

Persistent rain this past month as well as the days leading up to this past weekend’s season opener at Shannonville Motorsport Park hindered pre-season testing for not only Young but all the CSBK competitors. The Collingwood, ON based pilot’s first real test of the off-season changes made to his #86 Scot-Build Developments BMW S1000RR was during Saturday’s Dalton Timmis Insurance Pro Superbike Top Ten SuperPole session. Young just missed out on the Dalton Timmis Insurance SuperPole podium earning the fourth and final spot on the front row for Sunday’s 22-lap Pro MOPAR Superbike feature. The top six riders were all within the 1:04-second range during the ultra-competitive SuperPole session.

Blue skies and a calm breeze greeted the MOPAR CSBK fans and competitors on Sunday morning. Young was eager to put his Scott Cartier/ Willie Vass prepared #86 BMW S1000RR into the heat of battle.

Young launched off the line from the inside of the front row and powered through the first corner in fifth place and quickly moved into fourth at the hairpin. The three front runners began to gap Young and it would appear he may ride a very lonely race. While the top two riders battled for the lead Young began to reel in the front runners with the top four setting a pace at near qualifying times. With the top three focused on their battle, Young put his head down and stealthily joined the fray to make it a four-way contest for a spot on the podium.

Making several attempts to get by series veteran Matt McBride, Young finally secured third place but was now being challenged by Bodhi Edie for the last spot on the podium. With a handful of laps remaining Edie would briefly take over third from Young before he would go down relinquishing third place back to Young, who now had his sights firmly set the on the rider in second. In the closing laps navigating lapped riders presented an additional challenge for the top competitors. Young crossed the finish line with a hard fought third place aboard his #86 Scot-Build Developments BMW S1000RR.

“We made some great changes to the chassis this year which I feel was a huge help to our fast lap times this weekend. With the BMW S1000RR having great mid-range and torque we have kept the engine stock again for this year. After a hard and fast paced 22 lap feature I felt physically fine to be honest, which makes all the hard work in the off season worth it.” said Young.

The MOPAR Canadian Superbike Championship returns to TSN for 2017. This past weekend’s Pro MOPAR CSBK action from Shannonville Motorsport Park is tentatively scheduled to air on TSN 2 on Monday June 5, 2017 at 1:30 PM. Visit www.csbk.ca for confirmed broadcast dates and times.

The Mopar Canadian Superbike Championship heads to Grand Bend Motorplex in Grand Bend, ON. for Round 2, the Series’ first ever visit to this track, on June 9-11, 2017.

He is also a proud “Laps for Muscular Dystrophy” (Laps4MD) rider who’s pledged to donate $1 for every lap he leads this season. These donations go to Muscular Dystrophy Canada to help make a difference in the lives of over 50,000 Canadians affected by a neuromuscular disorder.

To keep up-to-date on Ben Young throughout the year visit; www.BenYoungRacing.com, www.facebook.com/BenYoungRacing and on Twitter and Instagram: @benyoung_86.

Michael Leon raced to a sixth place finish at the opening round of the 2017 Mopar Canadian Superbike Championship, held on May 28th at the Shannonville Motorsport Park’s Pro Track. Michael had qualified in 7th for the event, with a time of 1:05.492 seconds, a personal best at the time. The pace was faster than last years event, with 6 riders qualifying in the 1:04s.

The team was fortunate to have setup help from well known chassis and suspension man, Dale Rathwell. “I’ve know Dale for a long time but had never really worked with him as a rider, one on one. It was awesome. He made it out for some testing at the regional, the weekend before, and even showed up for Sunday’s races. We still have the support from Ohlins with Jon Cornwell too. There’s a lot of knowledge behind me and we managed to improve the bike. My best lap in the race was a full second faster than my best race lap last year at this track. Unfortunately, everyone went faster too.” remarked Michael.

Leon had a great start from the second row and was 4th on the first lap. He was able to hang on to the lead group for the first part of the race before dropping off the pace a bit.

“To be honest, I’m a little disappointed about not being able to mix it up with the lead group. But overall, I think we made some progress with the setup and we have some new ideas of different things to try. I’m looking forward to CSBK Rd2.” commented Michael.

CSBK Round 2 will be held at Grand Bend Motorplex on June 10th. Tickets are available at http://leonracing.us11.list-manage1.com/track/cli… The Royal Distributing Racing Team looks forward to meeting all the fans at the first national superbike event to be held at this venue.