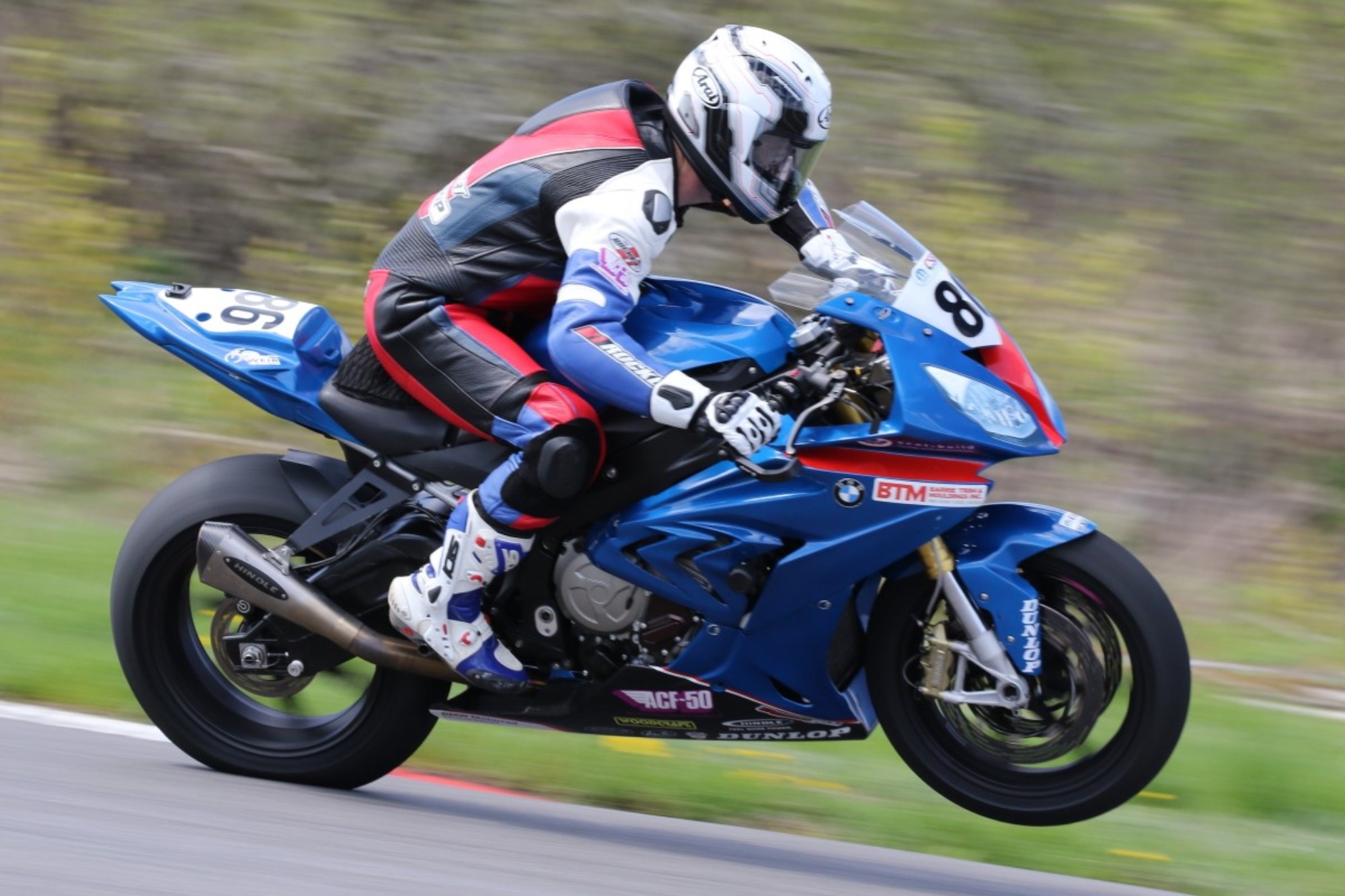 Toronto, ON – August 6, 2019 – For the first time in his Mopar Canadian Superbike Championship career, Ben Young will have a chance to clinch the Mopar Pro Superbike title entering Saturday’s opening race of the season finale Doubleheader Weekend at Canadian Tire Motorsport Park, presented by BMW Motorrad this weekend, August 9-11.

Young will reach CTMP with a shot at putting the exclamation mark on his terrific 2019 campaign, exiting round four with a commanding 59-point lead over rival Jordan Szoke and just 108 total points remaining, meaning the Collingwood, ON native needs only to finish respectably in both races to bring home the Canada Cup.

It likely won’t be a weekend of simply cruising around for Young, however, as the Scot-Build/Barrie Trim BMW S1000RR rider will be returning to the scene of his first career victory from a year ago and will look to celebrate his potential championship win from the top step of the podium.

While the odds are stacked against his biggest rival in Szoke, the four-time defending champion is the last rider in the field to count out, as five of his last six titles have been clinched at CTMP.

The Lynden, ON veteran also holds the record with 13 National championships for a reason, and even if he can’t storm back to take his fifth-consecutive trophy this weekend, he will at least be a sure bet to challenge for victories in both races aboard his Mopar Express Lane Kawasaki ZX-10R Ninja. Famed engine builder Scott Miller of Fast Company will join the Szoke program to ensure maximum performance rushing up the long Mario Andretti-named back straight at C.T.M.P.

Though the two front-running stars of the feature class will deservedly grab most of the attention, they will hardly be the lone challengers in what is shaping up to be the most talented grid in years, including a pair of former race winners set to make their much-anticipated returns.

Arguably the biggest fan-favourite of the weekend may be hometown star Alex Welsh, who is returning to the series after a near four-year hiatus following his semi-retirement in 2015. The nearby Uxbridge, ON native has two career wins under his belt, something that places him in exclusive company during the “Szoke era,” with both wins coming in thrilling fashion at CTMP.

Welsh will be making his return aboard a brand-new machine, however, as he will be the first to race the 2020 version of the BMW S1000RR in North America, the same bike that Young and company will have access to next season.

The most recent race-winner not named Szoke or Young will also be returning to the CSBK grid, as Kenny Riedmann will make his second appearance of the season and first at CTMP since scoring his first career victory one year ago.

The Belfountain, ON rider has stayed committed to running a partial program in 2019, finishing second to Young in the season opener before sitting out the next three rounds aboard his Sturgess Cycle Kawasaki.

Despite the four riders in front of them with race-winning experience already, it may also be the long-overdue breakout weekend for a pair of riders who came painfully close to their first career victories in round four at Atlantic Motorsport Park.

That heartbreak was especially true for Samuel Trepanier, who has come up just inches short of his first win on numerous occasions, including in an epic battle with Szoke at CTMP in 2017. The St. Isidore, QC native has had an up-and-down 2019 campaign aboard his Blysk Racing BMW, but remains just 32-points behind Szoke for second overall and could secure the result with his debut victory this weekend.

Another veteran rider who is looking to break a trend is Mississauga, ON’s Trevor Daley, who has also endured an inconsistent season in his first year aboard the Parts Canada Suzuki GSX-R1000R machine. Daley’s run of three consecutive podiums was derailed by tough finishes in rounds one and race two of round four, but he can erase that disappointment with a victory at his home track at CTMP.

The race within the race to watch will be the fight for the Brooklin Cycle Racing Pro Rookie of the Year award, as 17-year old phenom Nicolas Meunier enters with a ten-point gap lead in the standings aboard his Turcotte Performance Kawasaki ZX-6R.

The Verdun, QC native has come under late pressure from Ottawa, ON’s Vivian Matthews, who will have the horsepower advantage aboard his Windmill Motorsports Yamaha YZF-R1 as he looks to erase that deficit and win the award this weekend.

Young won’t be the only Pro rider on the verge of his first career title, however, as Will Hornblower enters the finale with a 34-point lead over fellow youngster Tomas Casas in the Liqui Moly Pro Sport Bike class.

Hornblower, one of the unluckiest riders in the field over the last few seasons, has seen his fortune change in 2019 after scoring his two first career Pro victories and finishing second in every other race aboard his Bickle Racing Yamaha YZF-R6.

The Sarnia, ON native is hardly out of the woods yet, however, as Casas is coming off a pair of wins at CTMP in 2018 and will look to do the same in order to claim his third-consecutive Sport Bike title aboard his Parts Canada Yamaha.

The 20-year old defending champion out of Peterborough, ON has been plagued by inconsistency in his fifth year as a Pro, crashing out in round one and settling for third in race two of round four to fall behind Hornblower in the overall standings.

The youngster at least holds a comfortable gap to David MacKay in third, who will look to come out on top of a thrilling battle with just 27 points separating the next three riders. The Hamilton, ON native struggled in round four as his title hopes slipped away, but can still secure his best result as a Pro with a strong weekend aboard his Mack Attack Racing Kawasaki ZX-6R.

One of the more exciting finishes may be in the TSN Motorcycle Experience Lightweight Sport Bike class, with just 14 points separating championship leader Ben LeClair from his rival Avery Hart.

LeClair, the younger brother of reigning class champion Jake, has followed in his sibling’s footsteps in 2019, scoring a victory in round one and finishing on the podium in all but one of the nine races since aboard his bLU cRU Yamaha YZF-R3.

The Blackstock, ON teenager may need to put his consistency aside and push for his second and third wins of the season if he looks to secure the title at his home track, as a surging Hart has trimmed the deficit drastically aboard his WRBF Yamaha.

The Princeville, NS native is coming off three-consecutive victories and has taken the top step of the podium six times already this season, but his inconsistency has cost him a shot at a runaway title, making for a thrilling finish at CTMP.

Both Amateur classes will also be set for an exciting finale, headlined by Guillaume Fortin and his 25-point lead over his teammate Christian Allard in the Mopar Express Lane Amateur Superbike category.

Fortin has finished inside the top-four in every race this season aboard his Turcotte Performance Kawasaki ZX-10R Ninja, something only the Blainville, QC native has managed to do, but a round four victory from Allard aboard his Turcotte Performance Kawasaki ZX-6R machine was enough to move the Chambly, QC native within striking distance of the title.

The elder LeClair will also have a shot at a trophy this weekend, although he will find himself in the opposite position from his brother in the Parts Canada Amateur Sport Bike class, trailing Allard by an even 20 points aboard his bLU cRU Yamaha YZF-R6 as his Quebec counterpart attempts to secure both Amateur championships in 2019.

The weekend schedule for the final round of the 2019 season can be found on the series’ official website at www.csbk.ca.