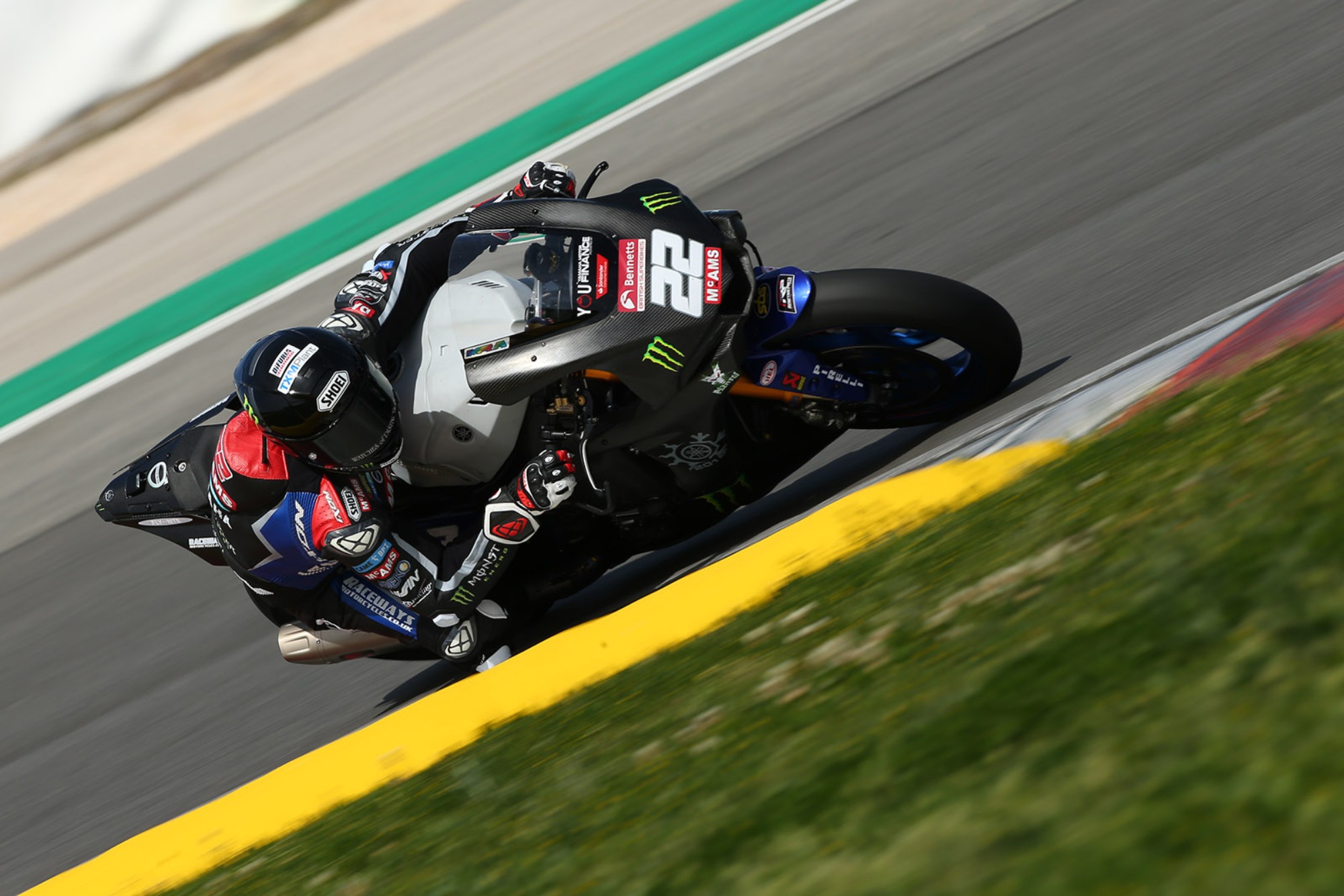 Jason O’Halloran saved his best until last on the final day of the Bennetts British Superbike Championship official test at Portimao, posting the fastest time of the test with his final run of the day in the closing ten minutes to push Scott Redding back into second by 0.127s.

The final day started with OMG Racing Suzuki holding the top three positions with Tommy Bridewell on the Oxford Racing Ducati, who also had a spell at the top, splitting Josh Elliot and Luke Mossey before Xavi Forés moved to the top of the times after the first hour.

Forés and Redding then locked out the leading two positions, as the pair prepare for their debut season in Bennetts BSB, but as the chequered flag went out to end the morning session it was the Be Wiser Ducati rider who had edged ahead by 0.339s.

When the test resumed this afternoon Bridewell was back on track for a longer run and he was able to move to within 0.177s of Redding and Forés with Elliot and Andrew Irwin completing the top five.

O’Halloran meanwhile had taken the second McAMS Yamaha of Tarran Mackenzie for a run whilst his team-mate sat out the final afternoon after completing his workload and still feeling sore from his crash earlier in the week.

Josh Brookes had been working through various changes on the second Be Wiser Ducati, before a run later this afternoon which put him fourth fastest on the times and the Australian ended his day early as he now prepares for the next official test at Silverstone.

As the final 30 minutes of the day arrived Redding, Forés and Brookes had the advantage at the top of the times, with the majority completing their test before the closing stages, however after moving into seventh O’Halloran returned to the garage and then went for one final time attack.

The McAMS Yamaha rider went for one final exit and was able to better his time to move to the top of the times, pushing Redding into second and Forés into third.

O’Halloran said: “That was exactly what we needed to end this test. We had a difficult end to Monteblanco because although we were fast, we had a few issues with the bike. We changed the frame there and it became really aggressive so we persevered with it here. I went out on Taz’s bike and his was completely different.

“I sat out a bit this afternoon whilst the boys changed the frame for me and when I went back out it felt immediately better. I did a run on old tyres and did my best time on the used tyres and then I came in and we put some new tyres in and I went out to have a bit of a go. It got me up front and I am feeling confident now heading to Silverstone and being up the sharp end.”

Bridewell held fourth as the Oxford Racing Ducati team continued their programme with the new Ducati V4 R, remaining ahead of Brookes and Elliot with Danny Buchan climbing to seventh in the final stages of the day.

Glenn Irwin was the leading Quattro Plant JG Speedfit Kawasaki in eighth, making progress with the 2019 specification bike, narrowly edging out his brother Andrew and Mossey completing the top ten.

The next Bennetts British Superbike Championship action comes from Silverstone on April 9 for the final Official Test before the season opener.

Be Wiser Ducati Racing Team riders Scott Redding and Josh Brookes today concluded five days Scott Reddingof pre-season testing in both Spain and Portugal in preparation for the opening round of the 2019 Bennetts British Superbike Championship which gets underway in a month’s time at Silverstone.

Gloucestershire-born Grand Prix winner Redding along with Aussie team-mate and ex-BSB champion Brookes took to the Monteblanco circuit in southern Spain for three days last week where the pair totalled over 300 laps getting to grips with the brand-new, factory-backed Be Wiser Ducati V4R.

In perfect weather conditions, 26-year-old Scott topped three of the sessions and was never outside the top three in the others whereas 35-year-old Josh sensibly dialled himself in, to end up in seventh place in Friday morning’s penultimate session.

From there, it was onto the Portimao circuit located on the Portuguese Algarve for two further days which again saw Redding at the cutting edge, setting fastest time in two sessions and again not outside the top three in the others. Brookes upped his pace considerably and indeed was second fastest behind his team-mate in Sunday afternoon’s test as the pair added a further 245 laps gaining vital data for Paul Bird’s Penrith-based team.

Both Redding and Brookes were joined by Ulsterman Alastair Seeley in Portugal, who will ride a Be Wiser Ducati V4R at the North West 200 this season, and who also reported favourable feedback to the PBM team as a result.

Johnny Mowatt (Team Co-ordinator): “Testing has gone really well with all of our riders finding their Josh Brookesfeet with the new Be Wiser Ducati V4R. We’ve explored a wide range of settings at both tracks and the result has been really positive. Scott and Josh have settled into the PBM team really well, whilst Alastair got a run out in preparation for the North West 200 and took to the bike in a short time which can only be good news. Now we get some very valuable time back at the workshop to work on some much-needed dyno time then move on to the Silverstone test in preparation for the first round.”

Indeed, both Redding and Brookes will be at the official BSB Test Day at Silverstone on Tuesday 9th April where they’ll be in action along with all of their rivals prior to the opening round which gets underway on Easter Sunday (21st April).

For further information, please visit the team’s new and updated website, www.pbmuk.net and the official website of the Bennetts British Superbike Championship www.pbmuk.net