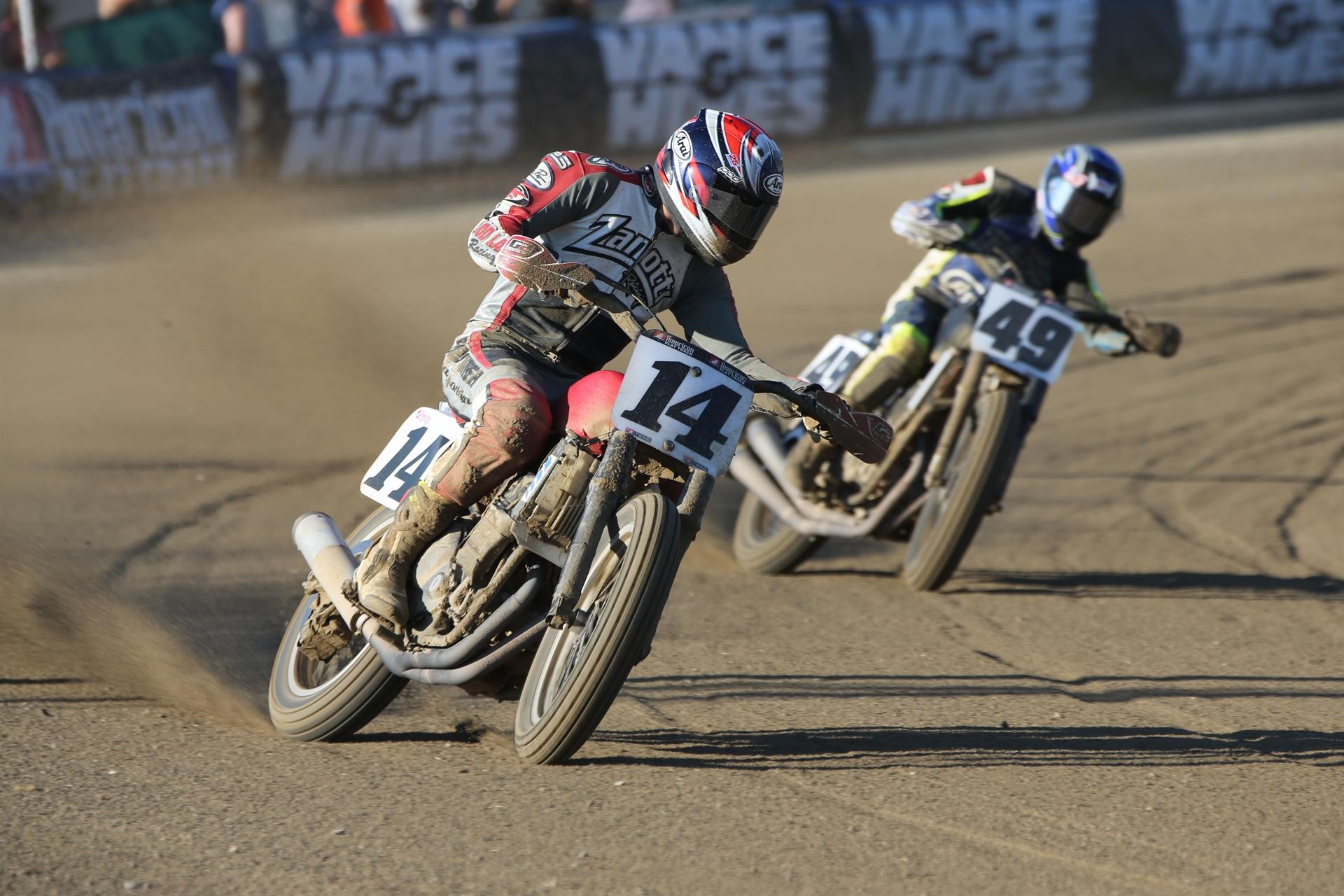 DAYTONA BEACH, Fla. – This Saturday, June 30, American Flat Track marches into the Allen County Fairgrounds for the Indian Motorcycle Lima Half-Mile, round 10 of the 2018 season.

Last year’s Lima Half-Mile was chock full of ’em. Just ask AFT Twins presented by Vance & Hines series points leader Jared Mees (No. 1 Indian Motorcycle Rogers Racing SDI Scout FTR750), who had podiumed eight times in eight races and won four of those eight but who failed to qualify for the Main due to penalties incurred from jumping the start.

Or ask Briar Bauman (No. 14 Zanotti Racing Kawasaki Western Powersports Ninja 650), who was having an up and down year but who blew everyone away at Lima, winning his first-ever AFT Twins Main Event by exploiting the high line of the circuit’s cushion surface in spectacular fashion.

What can fans expect this weekend? The Lima venue features one of the most unique and challenging racetracks on the AFT circuit, and the loose surface is bound to mix things up and very possibly balance the field in both classes. So it could be anyone’s race.

In AFT Twins, you can’t discount current series-leader Mees, who’s won all but two races this year. 2017 winner Bauman has struggled with inconsistent finishes again this year but could well be a factor this weekend.

“I’m gonna try like heck to repeat,” Bauman told us. “I’ve been watching video and trying to remember the feeling of winning last year. I need to not question whether things are right or not; just ride fast and loose.”

“I like tracks that force the rider be physical,” Bromley told us, “and really ride the bike. Lima does that, and I’m hoping to do well there.”

This year’s Lima Half-Mile will also feature the last-ever George Roeder Dash-For-Cash, a five-lap sprint race featuring the top six qualifiers going after $5000 of prize money. This year’s event will split a separate $5000 with six lucky ticket holders, picked randomly, each of whom will make the same amount of money their chosen Dash rider. “We wanted to give back to the fans who’ve made this race possible over the years,” said George Roeder Jr.

Gates open at 1:00 pm ET, with practice and qualifying beginning at 2:30. A Fan Walk and Autograph Session happens at 4:45. Racing is scheduled to start at 6:30, right after the 6:00 Opening Ceremonies and 6:15 Dash-For-Cash. Main events are scheduled to begin at 9:15, with racing concluding at approximately 10:00.

Tickets for the Indian Motorcycle Lima Half-Mile are available now at Lima Half Mile Tix. Fans that can’t make the race can watch everything from practice to the Main Events live on FansChoice.tv starting at 2:30 pm ET. For more information, click here: AFT Events.

For a thoroughly in-depth AFT experience with flag-to-flag coverage of both Main Events enhanced by drone and onboard footage, be sure to catch the feature broadcast of the Lima Half-Mile when it debuts on NBCSN on Saturday, July 7 at 2:00 pm ET.

Lima, Ohio – Forming her own team and introducing a new brand to American Flat Track (AFT) Singles competition in 2018, Shayna Texter’s No. 52 ST Racing Husqvarna FC 450 is likely to be one of the bikes to beat in Saturday’s Indian Motorcycle Lima Half-Mile at the Allen County Fairgrounds.

This will be the third race of the season on a half-mile for the AFT Singles competitors. Earlier this year, Texter finished second in back-to-back half-mile races at Georgia’s Dixie Speedway and at Texas Motor Speedway. The Pennsylvania rider is coming off consecutive third-place finishes on one-mile facilities at Lexington, Ky., and Oklahoma City, moving up to fourth in the standings.

“I’m excited to get back to racing after having a weekend off to recharge,” Texter said. “Last year at Lima I got messed up at the start of my heat, but I felt we came on strong in the second half of the main. That gives me a little extra bit of confidence and momentum heading into Saturday, knowing that I can attack the race track. If I do that right from the start, I think we’ll have a good finish.”

The incident at the start of the 2017 Lima heat race set her behind with second-row starts in both her semi and heat. She went on to finish sixth, which was her worst main event finish in a season that saw her win a division-leading five races.

“I’ve always liked Lima, even though I’ve had mixed results there,” Texter said. “Lima is one of – if not the – roughest race tracks we go to all year, being that it’s a half-mile pea gravel horse track. I definitely expect it to be rough and physical; you definitely have to attack the track hard every time you go out there.”

Overall, she is impressed by the steady progress of her new team with the challenge of taking Husqvarna to its first season of AFT competition.

“We’re continuing to dial the bike in, and I’m getting used to it,” she said. “I think we’re making steps each and every week. I haven’t come to the track with the same motorcycle [setup] two weeks in a row, so that says a lot about our development and progress we’re making so far.

Building a team and working with a new brand can make for a long to-do list, but Texter is focused on the item on the top of that list.

“I think it would be huge to get Husqvarna its first win. I think the last couple of weekends showed that we’re there; we just have to get a little luck on our side and have everything fall into place for it to happen.”

Jake Johnson Looks To Return To The Podium At Lima

PHOENIX (June 28, 2018) – Estenson Racing’s Jake Johnson heads to one of American Flat Track’s legendary venues – Allen County Fairgrounds – on Saturday, June 30, to kick up some pea gravel and make a run for the podium at the Lima Half-Mile.

With a weekend off to rest and regroup, Johnson and his crew look to build on the progress they made with the Indian Motorcycle Scout FTR750 at the previous round in Oklahoma City. Although more of a groove-track rider, Johnson is happy to return to the Half-Miles and let it all hang out at Lima to score his first AFT Twins podium of the season.

“I do have a lot of laps around there [Allen County Fairgrounds]. I’ve done well there in the past, but I’ve kind of been one extreme to the next at Lima. Typically, I’m kind of a groove-track guy but it’s kind of nice to get a little bit of a change and be able to hang it out and go sideways and throw some dirt.

“We learned a lot at Oklahoma and I think that’s going to apply towards Lima. We’ll see. I’m looking forward to getting back on the Half-Miles and not having to worry about drafting or any of that stuff; just go out there and kind of leave your brain in the toolbox and just ride the thing. Looking forward to that. Hopefully, we can keep improving.”

The Lima Half-Mile is streamed live, Saturday, June 30, on FansChoice.TV starting with practice at 2:30 p.m. ET, followed by Opening Ceremonies at 6:00 p.m. ET, Heats at 6:30 p.m. ET and the Main Events at 9:00 p.m. ET. Catch the race on NBCSN, July 7 at 2:00 p.m. ET. For tickets and additional information about the event: http://www.americanflattrack.com/events.

PHOENIX (June 28, 2018) – Estenson Racing’s Kolby Carlile returns to the Lima Half-Mile on Saturday, June 30, looking to take care of some unfinished business at Allen County Fairgrounds as the American Flat Track season hits the halfway mark with round nine of the 2018 AFT Singles Championship.

Carlile is quite fond of the legendary pea gravel track. Last year, he was on track to dominate the competition at the Lima Half-Mile, but a stroke of bad luck had him sidelined for the Main. It was a race that he felt was his, making the reigning champ more motivated than ever to take home the win this year on his Yamaha YZ450F.

“I’m looking forward to Lima. It’s an actual cushion track versus what we were on at OKC. I did pretty good there last year, but I got cut kind of short [with a mechanical]. There’s quite a few riders that are going to go good there, but I’m hoping to be on top.”

The Lima Half-Mile is streamed live, Saturday, June 30, on FansChoice.TV starting with practice at 2:30 p.m. ET, followed by Opening Ceremonies at 6:00 p.m. ET, Heats at 6:30 p.m. ET and the Main Events at 9:00 p.m. ET. Catch the race on NBCSN, July 7 at 2:00 p.m. ET. For tickets and additional information about the event: http://www.americanflattrack.com/events.