MotoGP: Dani Pedrosa Says He Has No News To Report On His Future Plans

MotoGP: Dani Pedrosa Says He Has No News To Report On His Future Plans 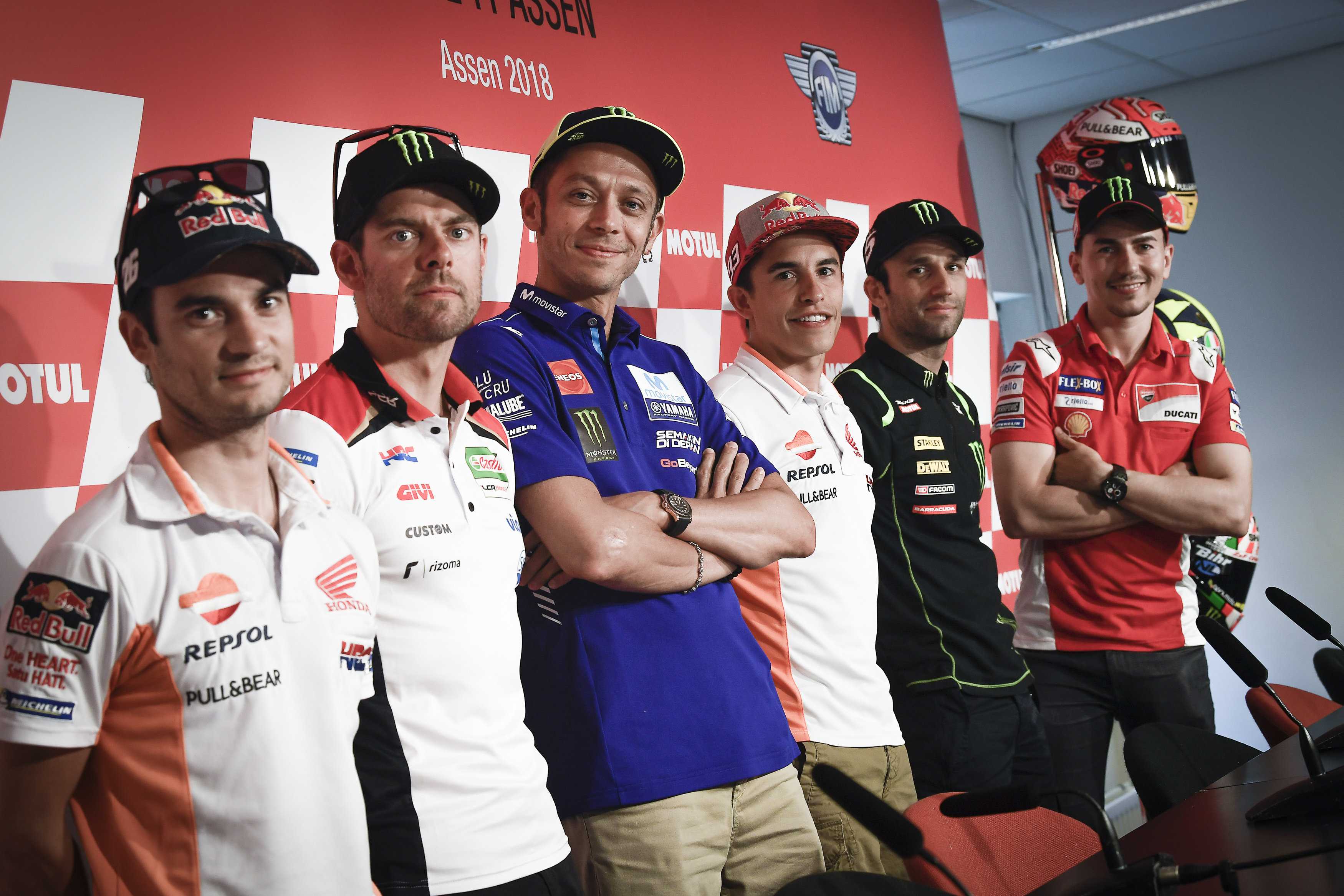 “This track is fantastic”

The Press Conference convenes at the ‘Cathedral’

Before that though, there was some action in the centre of Assen as Scott Redding (Aprilia Racing Team Gresini), Hafizh Syahrin (Monster Yamaha Tech 3), Moto2™ man of the moment Fabio Quartararo (Lightech-Speed Up Racing), local hero Bo Bendsneyder (Tech 3 Racing), Catalan GP winner Enea Bastianini (Leopard Racing) and Moto3™ Championship leader Marco Bezzecchi (Redox Prüstel GP) headed for the town square for a different kind of fight – taking part in a martial arts clinic run by Dutch Kickboxing ace Sarel de Jong and pro boxer Ben Tingen. Then it was back to the track and time to talk racing.

Marquez spoke first, from Barcelona to Assen…and that all-important weather. “Montmeló overall was a great weekend because increased our advantage in the Championship. On Monday in the test we made a few steps and we’ll work on them again here. Assen is a circuit I like, T4, the last part of the circuit is really nice. I enjoy it a lot and it’s not one of my best like Austin or Sachsenring but I’m consistent every year and I’m able to ride well and find a rhythm. I hope it continues this year and I hope I can be on the podium…but it looks sunny so that can change quite a lot!”

That it can, and as Marquez says, the weather forecast is uncharacteristic – something also touched on by nine-time World Champion Rossi. After he talked through his post-Catalan GP test, that was reason to be optimistic. “We didn’t have a lot to try at the test, some small details – so I was optimistic to improve a bit on Monday but we didn’t really. I wasn’t able to go faster. But this track is fantastic, I like it a lot and the M1 usually works well here. It looks like the weather is good, the forecast is optimistic which is great because it’s a track you enjoy a lot on a MotoGP bike. We’ll see, I arrive from some podiums so we’ll try and continue in the same way!” With ten wins across all classes at the track, and the rider from Tavullia taking victory in 2017, could the stage be set?

A man who’ll be looking for more of a turnaround, meanwhile, is Zarco. After a stunning start to the season the Frenchman has had a couple of more difficult races – so what’s the plan?

“I hope to find competitive Zarco again! The last two races have been complicated and I’m a bit depressed now, I didn’t even shave,” he jokes, before going back to serious. “But when it’s hard you learn things, and here last year was an interesting Grand Prix, it’s a shame I went into the pits after seeing some rain, I was scared and thought if it rained it would be good…but this time the weather looks much more stable.

“We need to stay cool and improve with the team, find things on the bike to prepare the race, because the factory guys are good from Friday to Sunday finding the small things that make the difference, so I hope I can find those things and feel comfortable on Sunday.”

One big rival for top Independent Team rider this weekend will likely be Cal Crutchlow (LCR Honda Castrol). The Brit took his first MotoGP™ pole at the venue in 2013 – as did Zarco in 2017 – and is aiming high again.

“The aim is the podium this weekend. We have to be positive and positive with the team, they’ve been working really well, and Honda. We can see from Marc it’s possible to be on the podium week in week out, maybe you don’t have to win every week but if you’re there, racking up the points…we’ve been close and this weekend again we’ll try and be there! It’s a circuit I love and a circuit that’s been kind to me in the past. My one regret is that I never got to ride the old circuit!”

It has indeed been kind – not just in MotoGP™ – so is there anything that seems to make a positive difference for British riders at the track? According to Crutchlow, yes.

“It’s normally raining, same as in England,” grins the number 35. “Or it’s half and half and you have no choice – slow down or go fast! It seems British riders always seem to go well here and from no extra advantage!”

The conditions for this weekend were the first thing on Jorge Lorenzo’s mind, too – and the man of the moment has also seen the good forecast. “I think we’ll be lucky and have four sunny days, it’s always nice to ride in good conditions. The last five or six years for some reason I haven’t had great results in Assen, when before it was one of my favourite tracks. In MotoGP, apart from 2010, I didn’t get good results but every year is another year. I have a lot of confidence after winning the last two races, I was watching the race from last year and seeing a lot of Ducatis working really well on Sunday so it means our bike can work here, especially now we have a good base. So let’s have an open mentality and see what happens.”

Finally, as the rumour mill continues about Pedrosa’s future, the number 26 was the man answering questions. Saying he had hoped to have news on his future by now – as was the case at the Catalan GP – Pedrosa confirmed he doesn’t have an update yet. Then looking at the season so far, and his best result of 2018 last time out, talk turned back to the present.

“I didn’t really start the season well,” says the Repsol Honda rider. “So I think in the last Grand Prix we made a good improvement, compared to the previous race.” That was the top five, and it was useful: “In the race I saw a lot of details where I could improve, and on Monday in the test we worked a lot on that. We’ll have to see if that works as a base for the rest of the tracks.”

The rest of the tracks – all 12 of them, beginning with the legendary Assen this weekend – still lie ahead, with everything very much still in play. Seven rounds down it’s Marquez ahead, but will the tide turn at the TT Circuit Assen? And will the weather stay away?