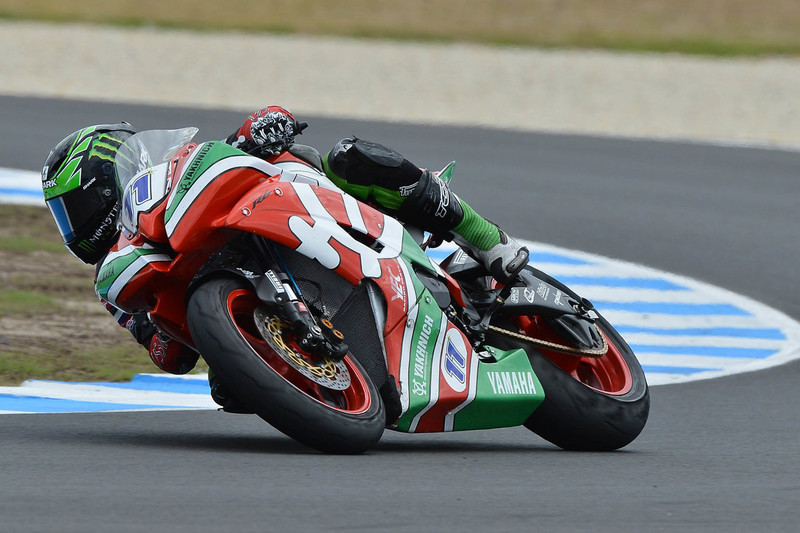 FIM Supersport World Championship Motorland Aragon, Spain April 12, 2013 Qualifying Session One Results (all on Pirelli tires): 1. Sam LOWES, UK (Yamaha YZF-R6), 2:01.930 2. Sheridan MORAIS, South Africa (Honda CBR600RR), 2:02.393 3. Michael VD MARK, Netherlands (Honda CBR600RR), 2:02.524 4. Kenan SOFUOGLU, Turkey (Kawasaki ZX-6R), 2:02.557 5. Luca SCASSA, Italy (Kawasaki ZX-6R), 2:02.738 6. Kevin COGHLAN, UK (Kawasaki ZX-6R), 2:03.018 7. Vladimir IVANOV, Russia (Kawasaki ZX-6R), 2:03.030 8. Fabien FORET, France (Kawasaki ZX-6R), 2:03.076 9. Vladimir LEONOV, Russia (Yamaha YZF-R6), 2:03.083 10. Florian MARINO, France (Kawasaki ZX-6R), 2:03.532 More, from a press release issued by PTR Honda: PTR HONDA’S Sheridan Morais is in second place on the provisional grid for Sunday’s second round of the World Supersport Championship at Aragon in Spain. The South African showed his true colours as he got to grips with his PTR Honda. He lost track time at the opening round but is now learning about his 2013 race machine fast and there is plenty more speed and potential to be realised across the weekend. Sheridan said: “That was a lot of fun and I am happy. Thank you to the team and everyone for supporting me. My PTR Honda is the business and I am looking forward to the rest of the weekend, I think there is more to come.” Luca Marconi took two seconds off his fastest lap from last year to take 17th on the grid. After securing his best result in the class on his debut for the team, he is upbeat and looking to improve further. In 20th place is David Linortner, the Austrian rookie taking a measured approach to the weekend and building his effort. Matt Davies in 22nd place continues to impress on his second outing in the class. Nacho Calero crashed twice today losing track time at his home event and is 32nd but looking to improve. There are further practice and qualifying sessions tomorrow before the race takes place at 1330CET on Sunday, 14th April. Simon Buckmaster, PTR Honda Team Manager, said: “We are back where we should be. Considering the amount of riding time he lost in Oz, he did a fantastic job today. We can improve the bike, he can improve a bit, only first qualifying. “Luca is doing a good job, waited for a tow on his last tyre. Showing has ability, needs to do it on his own. He is in good shape for qualifying. “David had a big improvement in the afternoon, good shape. Matt – important to realise how young he is, learning all the time. Nacho had two crashes and he has a lot of work to do here and we are working with him on it.” More, from a press release issued by Pata Honda Supersport Team: Provisional Spanish front row for van der Mark Michael van der Mark maintained his good start to his debut World Supersport season by claiming a provisional front row slot for Sunday’s second round race at Motorland Aragon in Spain. The 20-year-old Dutch flyer followed up his stunning podium in the opening round at Phillip Island, Australia, with an impressive display as the series returned to Europe. He is just 0.5s off the provisional pole time set by British rider Sam Lowes. His Pata Honda World Supersport team-mate, Lorenzo Zanetti, set the 11th fastest time in today’s 45-minute qualifying session at the 5.344km Aragon circuit, but the Italian is confident of further improvements tomorrow. Michael van der Mark – P3, 2m02.524s Today was not bad. I was quite comfortable doing fast lap times as soon as I went out and in qualifying this afternoon I used three different tyres. I did my fastest time on the tyre that we didn’t expect to be so quick on and then, near the end, I got stuck behind some other riders. The test last week was good and the first day here has gone well, so I think we can go a little faster tomorrow and focus on the race set-up. Lorenzo Zanetti – P11, 2m03.583s If we look back at the test last week, I have improved my time by one second, which is good. The whole team is working very well towards a good result on Sunday. But I am still 1.5 seconds from the front and one second behind Michael, so I know we have some more work to do. For tomorrow it’s necessary to make another step in order to get into the first three rows of the grid, so we will check all the data with the team tonight and see where we can make some improvement and decide which strategy we need. I need to improve in the first sector and I know I am getting some lines wrong because I sometimes still use a superbike style. Pieter Breddels – technical co-ordinator Michael continues to impress us just by riding really well and he has been up with the top guys all day. He held second place for quite a long time this afternoon and in the end he finished third with a time that is already 0.6s faster than during the test last week. He’s stepping up his performance for this race weekend and there are no problems with the bike. Lorenzo was 11th with quite a good time, but he is not very consistent yet. He needed a bit of help to make that time but still he did it and he’s still improving. Now we are looking for some changes and improvements to get him into some kind of a rhythm.