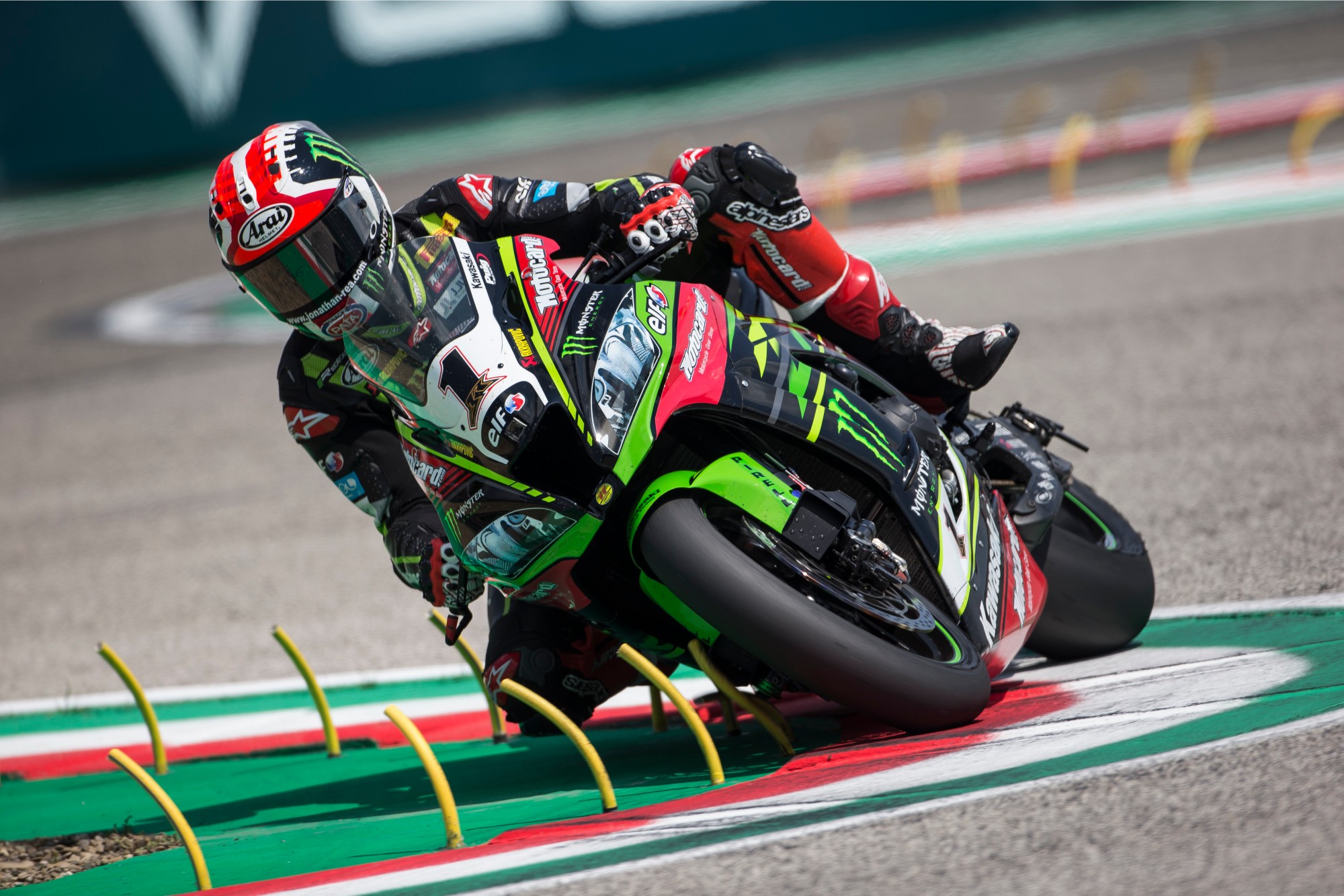 Rea And Haslam Return To Imola

Official KRT riders Jonathan Rea and Leon Haslam will get their respective campaign’s back underway when the FIM Superbike World Championship circus rolls into the historic Italian city of Imola this coming weekend, for round five of the 13-round season.

After a month’s break from competitive racing both KRT runners are keen to get back into action at the classically-sculpted Autodromo Nazionale Enzo e Dino Ferrari di Imola, which features no fewer than 22 corners along its 4.936km length.

Rea has an impressive individual record at Imola with seven race wins from 12 podiums all-in, making this parkland track the third most successful circuit on his untouchable WorldSBK CV – only behind Assen (12 wins as part of an 18 career podium total) and Portimao (seven wins as part of a 14 podium total). Jonathan won the double for Kawasaki at Imola last season, when there were only two WorldSBK races per weekend.

For Haslam, the 2018 BSB champion with Kawasaki, Imola is a well-known circuit. He has ridden as a WorldSBK wildcard as recently as last year, as well as being a regular WorldSBK competitor at Imola during much of his earlier career. His personal bests at the Italian venue are two third places, set in the 2012 season.

This season’s new Ninja ZX-10RR has already taken Rea and Haslam to the podium in the opening four rounds of the 2019 season; Jonathan 11 times and Leon twice.

The dramatically undulating and challenging Imola track affords little opportunity for the riders to relax between its many corners and rapidly interlinked technical sections. No fewer than four chicanes reduce speeds on the otherwise high-speed sections and none of the straights are entirely arrow straight, as they have to follow the perimeter of the park’s layout.

There are three WorldSBK races at all events this year; two longer races, which bracket a ten-lap ‘sprint’ on Sunday morning. The short Tissot-Superpole race also determines the grid positions for the top nine riders in the final race of the weekend, to be held on Sunday afternoon.

In the championship standings Rea is a clear second with 183 points and Haslam fifth, with 93 points.

Another long break in the WorldSBK calendar will follow on from the Imola round, with the Circuito de Jerez Angel Nieto in Spain hosting round six, between 7 and 9 June.

Jonathan Rea, stated: “I had a great few weeks’ rest at home, and I am re-charged and ready to attack this mid-part of the season. After four rounds we have understood and evaluated where we are and where we need to improve. So we approach Imola trying to make another step in terms of my riding and also the performance of the bike. The circuit is incredible and I love racing at Imola, because it is steeped in history and from a rider’s point of view it is a fun track to ride. It is very unique with a lot of undulations and you really need to feel at one with your bike to push on the limit there. I am very excited for FP1 just to understand our performance, if we can be competitive, which I am sure we can be. I will work with my team throughout Friday to give us a bike to compete. I see Imola as a track where we can be really competitive and last year we had a great season, so I feel like it is the time in my season where we can try to change the momentum of the championship. Imola gives us a good opportunity to do that.”

Leon Haslam, stated: “Imola is going to be a good race because after Assen, it was a disappointment. I felt we had good pace for the podium there but with the front tyre issues we had, we dropped back. To finish where we finished off the podium was not a nice way to go into a long break. We are heading into Imola now and I actually raced there on a Puccetti bike last year with the ELF colours that my dad, Ron, used to run. The pace was OK for a top five although we had some issues in the races. I am quite confident that the bike will work well at Imola and I can probably adapt a little bit faster, having ridden the circuit last year. It is a circuit of mixed memories for me. I lost the championship chance in 2010 to Max Biaggi there but I also had some quite good battles with Carlos Checa. I have some up and down memories but I will have to wait and see where the other competition is at. But from my side I am really looking forward to it.”