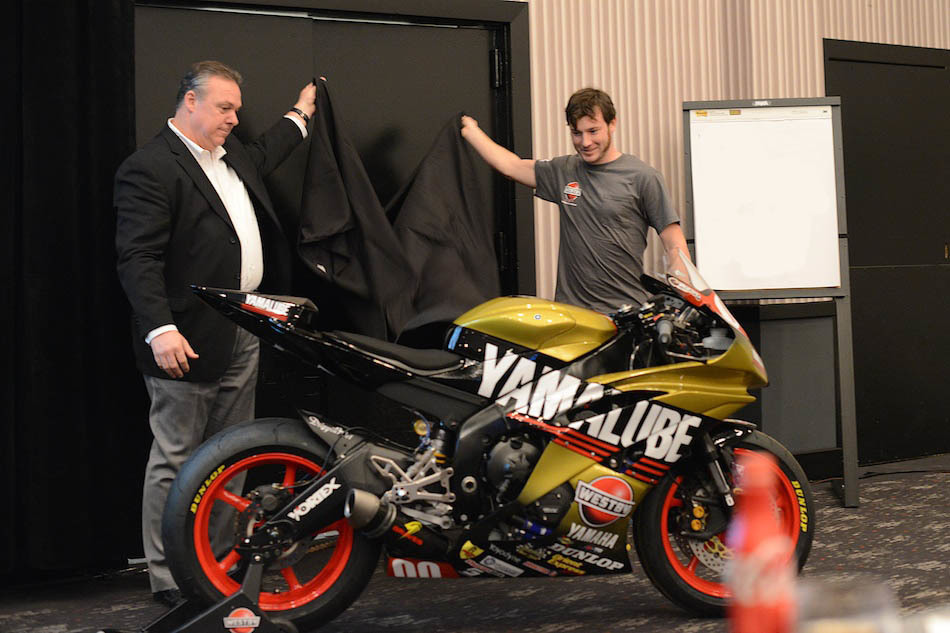 “I’m ready to get back to my roots,” said the 26 year old. “The Yamaha has always been my 600 of choice. The first race I ever won at a National club race was on a Yamaha, and I prefer this bike over the others. Some people think I was crazy to leave a good team and run my own program, but I know we can be successful. I’d like to thank Team Hammer for their help the past few seasons. I feel like I have grown a lot as a rider with their help, and now I’m ready to take on this challenge. We’re starting a new team, but everyone involved with the team really wants to be here to take this on and gladly joined up knowing the task at hand and our goals. This project is all our baby together, and I’m more than excited. I got to sit on the bike with the paint scheme on it for the first time Sunday night. She told me to come back when I had my leathers and gear on and let’s go racing.”

Westby, an experienced AMA Pro Daytona SportBike race winner who finished second in the 2012 championship, feels he can be a title contender in 2014. “I know I can make it happen. I’m at a mature point in my career where I have developed my craft, and we’re ready to be fully competitive against a very good field,” he said.

Yamalube Racing Support Manager Trevor Kemp said, “We’re excited. We are always looking at ways to promote Yamalube through racing, and this came along and we thought a chance to work with Dane and his new team was perfect. The paint scheme is interesting. We wanted to use the concept of the gold bottle, which is our full synthetic product range bottle color, and we think it looks fantastic. I think Dane can potentially win the championship, and this team strengthens Yamaha’s position in the series.”

The team will run out of the Performance Cycleworx shop in the Atlanta area. “We feel this is a fantastic program, and our goal was to build a team around Dane that could win races and contend for the championship,” said Team Manager Chuck Giacchetto. “Dane and his father Tryg decided to build their own team this year, and since I’ve worked with them for six years, I had a good idea of how they wanted things to come together. We were able to bring Jerry Daggett on board as crew chief. Jerry and I have worked together outside of racing for years and have been looking for an opportunity to put a project together at the track. His resume speaks for itself, and we have full confidence in Jerry.”

Giacchetto added, “We worked a deal with Trevor Kemp at Yamalube, and he knew what he wanted, which was Yamalube up front. It’s a great pairing, and we all have the same attitude – be aggressive and do what it takes to win on the Yamaha R6. Keith McCarty at Yamaha has also been a great help. We have already found that being associated with Yamalube has opened doors and greased wheels for the team. Dane’s other sponsors also have stepped up, too. We feel everything is in place for Dane to succeed in 2014.”

Westby’s challenge will begin at Daytona International Speedway, where he finished second in the 2010 Daytona 200. “I feel like I have some unfinished business at that track, so it’s a great place to start,” Westby said.

Repsol CEV: Race Video And Results From Autodromo Do Algarve

#RacingAhead: are you ready for Jerez? After months of anticipation,...
Read more
Feature