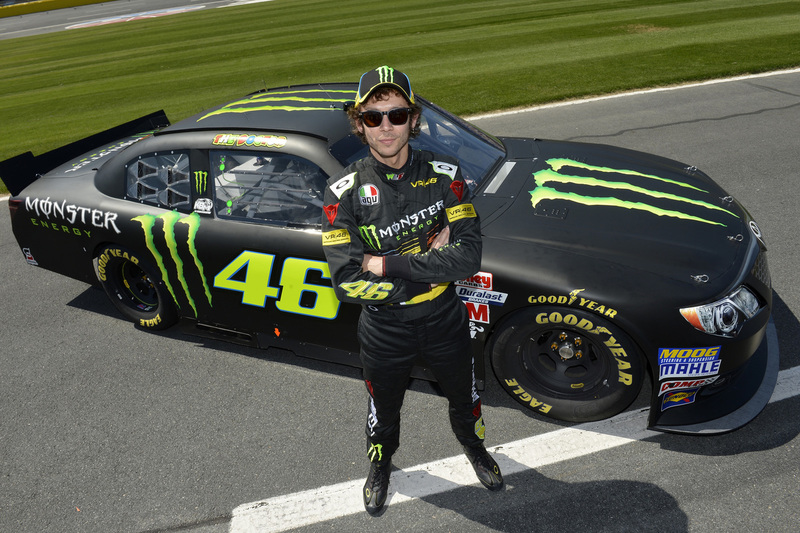 Straight from their grueling competition schedules, two of the world’s most recognized and accomplished racers joined one another at the legendary 1.5-mile Charlotte Motor Speedway in North Carolina. The spiritual home of NASCAR – the National Association for Stock Car Auto Racing – nine-time World Champion Valentino Rossi set aside his factory Yamaha YZR-M1 MotoGP bike to take a shot at getting behind the wheel of Kyle Busch’s omnipotent Nationwide Toyota Camry. Early on Monday morning, April 22nd, Kyle Busch – winner of the last three NASCAR Nationwide races – met with Rossi, walking around the car and explaining just how the beast was to be tamed. From there, Valentino was given a headset and listened in while Busch put in numerous high-speed laps on the fabled oval. Upon pulling into the pit area, the two racers conferred with one another, Busch downloading information to help get Rossi up to speed as quickly as possible. When the moment of truth came – and like putting his head into the mouth of a lion – ‘The Doctor’ climbed into the steel tube framed car, flipped the switch and the 358 cubic inch, 650-horsepower engine fired to life in a deep V8 growl. Rossi then dumped the clutch, fired through the gear pattern and motored out onto the 1.5-mile Charlotte Motor Speedway. A superspeedway with four 24-degree banked turns, Charlotte is one of the fastest and most respected tracks on the NASCAR circuit, so this test was no joke. Once he got the car up to speed – around 185 miles per hour – Rossi became more and more comfortable, and in doing so, his lap times dropped dramatically. When it was over, Rossi removed his helmet and climbed out of the car with a big smile on his face. “It was so cool to understand the feeling!” beamed VR. “I have a lot of friends from Europe and Italy who follow NASCAR. It looks like it’s a completely different type of racing than what we do in Europe and I expected something more like this –exciting, high speed and a great feeling in the corner. In the bank you have a lot of grip, so you are glued on the racetrack. It was great, I enjoyed it a lot. I love driving the race car, and I always have, so it was exciting to drive a NASCAR.” Valentino added: “At the beginning it was a bit strange because it’s difficult to go straight. But after some laps, I had a lot of confidence and I was able to go faster and faster and faster. I must say I got along very well with Kyle. He’s a good guy. I like him and he gave me a lot of important advice.” Kyle Busch, the winningest NASCAR Nationwide driver in history (he has 55 career Nationwide wins), not only got a big kick out of hanging out with the world’s most celebrated motorcycle racer, he was quite impressed with Rossi’s NASCAR driving skills, as well. “I thought it was a really cool experience and it also helps when you have two guys who are enthusiastic about their sport and have a good mantra about it,” smiled ‘Rowdy’ Busch. “I think Rossi is a really cool dude. We were just having fun, hanging out together. To me, I thought the experience was awesome. It’s cool Monster Energy brought us together, it was a lot of fun. Just getting the feeling of asking him about his sport and him asking me about NASCAR a little bit. Just having the dialogue there was good.” “And as far as driving the car, I thought he did pretty good. He started out a little slow, which is fine, but every lap he picked it up a lot. He got to where he was running some competitive lap speeds – times that would put him in the top-15 in Nationwide Series practice. That’s pretty good for a guy in his first start, who is just coming over and getting used to things and someone that is used to driving on two wheels.” Coach Joe Gibbs, the owner/operator behind JGR found the entire day to be quite entertaining. “Well it’s exciting, you’ve got Kyle and Valentino – someone that is great on four wheels and someone that is great on two wheels. I think you can even see that everyone here gets hyped up about it too. I think it was a fun deal and it was a lot of fun to be a part of it. I thought Valentino did really well, as a matter of fact I’m thinking about offering him a contract.” Lin Jarvis, Managing Director of Yamaha, had his own unique perspective on the collision of two radically different forms of motor racing. “For me it’s really fascinating to come here to Charlotte, to the home of NASCAR – this is my first contact with NASCAR, ever – so it’s something I really wanted to do at least one time. To be here with Joe Gibbs Racing and Kyle Busch, that’s as good as it gets. To have Valentino mix it up here, experience the car, is a fascinating experience for him as well. I just saw Valentino when he came in off the track and even through that helmet, you could see that huge smile on his face. He’s enjoying it and I think this is really great. Thanks to Monster Energy for making this possible.”