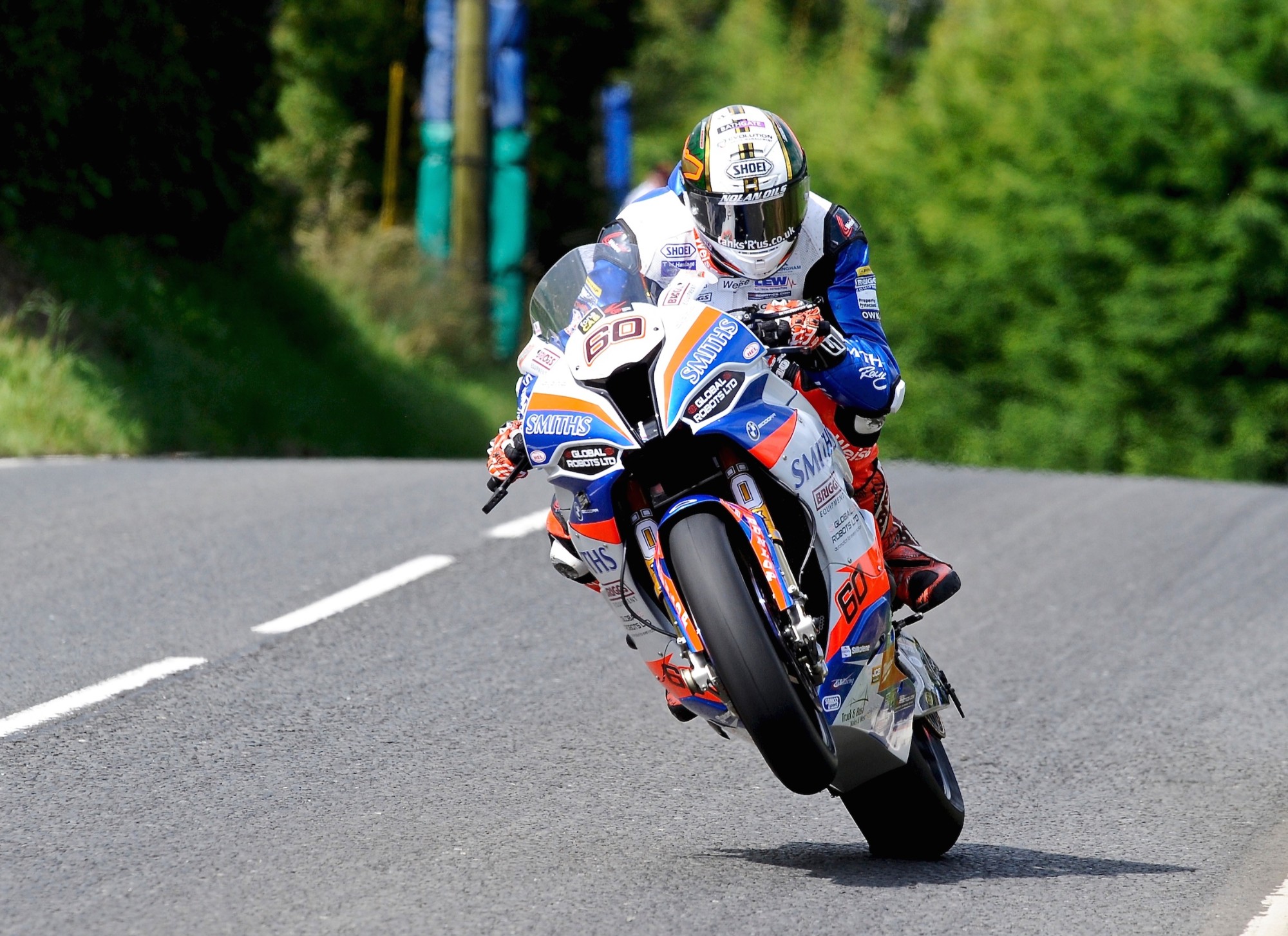 Thursday afternoon saw the start of race action at the 2019 fonaCAB Ulster Grand Prix with a feast of high speed action that saw Dundrod reclaim it’s title as the world’s fastest road race.

Peter Hickman set a new outright lap record of 136.415mph on his way to victory in the Superbike race aboard the Smith’s S1000RR BMW.

The new record is 2.6 seconds faster than the old mark and almost 1 mph quicker than his TT record of 135.452mph.

“I was struggling to pass Dean in the early stages as he was really fast in a straight line and we’re down a bit on top speed.” the world’s fastest road racer said.

“I got a really good run out of the last corner and used the slipstream perfectly along the Flying Kilo so I knew if I could get to Deer’s Leap in front, I’d have a good chance of getting away. Once I got the clear track, I could ride my own lines, rather than Dean’s, and I hit all my markers so was able to pull away.”

“We don’t have the fastest bike out there but we do have a very good package so it’s great to get the win and get the outright lap record back for myself, the team and BMW.”

Conor Cummins posted the highest speed ever recorded at Dundrod when he broke the beam on the speed trap on the Flying Kilo at 202.8mph on the Milenco Padgett’s Honda Fireblade. Cummins finished third in the race with Dean Harrison taking the runner slot on the Silicone Kawasaki. The race was red flagged on the final lap when Sam West crashed without injury at Quarry Bends and his BMW burst into flames.

Hickman went on to make it a double with victory in the Supersport race later in the evening on his Trooper Beer Triumph, winning a huge tussle with Lee Johnston on the Ashcourt Racing Yamaha. Harrison was third on the Silicone Kawasaki.

The Lightweight race was won by Neil Kernohan on the Logan Yamaha just 0.06 seconds ahead of Davy Morgan (Honda) with Paul Williams (Yamaha) in third.

Czech racer Michal Dokoupil repeated his 2018 victory in the Ultra Lightweight race aboard his Ariane machine with Christian Elkin 1.5 seconds back on the Wylie Honda. Melissa Kennedy was the only female rostrum finisher of the day aboard her KNR Honda in third.

More, from a press release issued by Smiths Racing:

Man of the Meeting for the past two years, Smiths Racing rider Peter Hickman got his campaign at the Smiths Racing2019 fonaCAB Ulster Grand Prix underway in similar fashion by taking a double victory on the opening afternoon at Dundrod.

But not only did the Lincolnshire ace take the win in the opening Supersport race aboard the Trooper Beer by Smiths Triumph, on his way to winning the opening Superbike race on the Smiths Racing BMW S1000RR, he upped the outright lap record to an amazing 136.415mph to reclaim the title of the fastest road racer in the world.

After mixed weather during qualifying yesterday, today saw perfect conditions all around the 7.4-mile Dundrod circuit and the morning couldn’t have gone any better for the 32 year old as he recorded the pole position time in each of the Superbike, Supersport and Superstock classes.

Indeed, a speed of 134.969mph in the Superbike class saw the Lincoln-based rider lap over half a second inside the lap record on his Smiths BMW and gave indications of what lay ahead as his pole position lap was almost two and a half seconds clear of his nearest rival Dean Harrison.

It was Harrison who led in the early stages of the five-lap Superbike race but Hickman was never more than a quarter of a second adrift and on the third lap, not only did he hit the front but he also smashed the previous outright lap record of 134.614mph with his first 136mph+ lap to surge clear by over three seconds.

He was again inside the old lap record on the fourth lap and with the red flag coming out on the fifth and final lap, his eventual winning margin was a commanding 5.68 seconds.

Hickman was soon back out on track, this time for the five-lap Supersport race where he was on board the Trooper Beer by Smiths Triumph but it was a lot closer this time around as he went head to head with Lee Johnston for the entire race distance.

It was Johnston who led in the early stages and although Hickman hit the front briefly on lap three, the Ulsterman was soon back in the lead. It all came down to the last lap and the duo were side by side for much of it, but it was ultimately Peter who prevailed, and a winning margin of 0.357 seconds saw him claim his eighth Ulster Grand Prix victory.

Peter Hickman: “To be honest, I was struggling to pass Dean in the early stages of the Superbike race as he was really fast in a straight line and we’re down a bit on top speed. I was trying to work out where I could make a clean pass on him but I got a good run out of the last corner and used the slipstream perfectly along the Flying Kilo so I knew if I could get to Deer’s Leap in front, I’d have a good chance of getting away. Once I got the clear track, I could ride my own lines and I hit all my markers and although we don’t have the fastest bike out there, we do have a very good package. It’s great to get the win and get the outright lap record back for myself, the team and BMW but I knew the Supersport race would be even closer and although I tried to make the break, it soon became clear that wasn’t going to happen. On the last lap, I managed to get by Lee at Wheeler’s but for the last third of the lap we were side by side, but he’s such a class act, I felt perfectly comfortable racing so close with him. The Triumph has been flying this year and it seems to do whatever I want it to do so to end the day with two wins and the outright lap record is brilliant.”

Darren Jones, Team Co-ordinator: “It’s been a faultless day and it couldn’t have got much better! After three pole positions and lapping inside the outright lap record, we felt confident coming into the races, but Peter never ceases to amaze us, and he really turns it on when he needs to. He got his head down on the third lap and we could see from the sector times he was putting together a pretty special lap so to post the first ever 136mph+ lap of Dundrod was something else and it was a superb race win. We’re down on top speed and are running a bog-standard road engine so it’s testament to how well Pete’s riding, what a great job the team are doing and, of course, how good the Smiths BMW S1000RR is. As for the Supersport race, it was just a mega battle between Pete and Lee which could have gone either way and he wouldn’t have ridden as close to anyone else as what he did Lee. Both riders really enjoyed it and even if we hadn’t have won, we’d have been pleased for Lee as he’s such a great rider. As it was, we’ve ended the day with two more wins at the Ulster GP and have claimed back the title as fastest rider, and team, in the world so we’ll have a little celebration tonight.”

The action is scheduled to recommence on Saturday with two more Superbike and Supersport races as well as the only Superstock race of the meeting although the weather forecast currently could cause some disruption to the schedule.