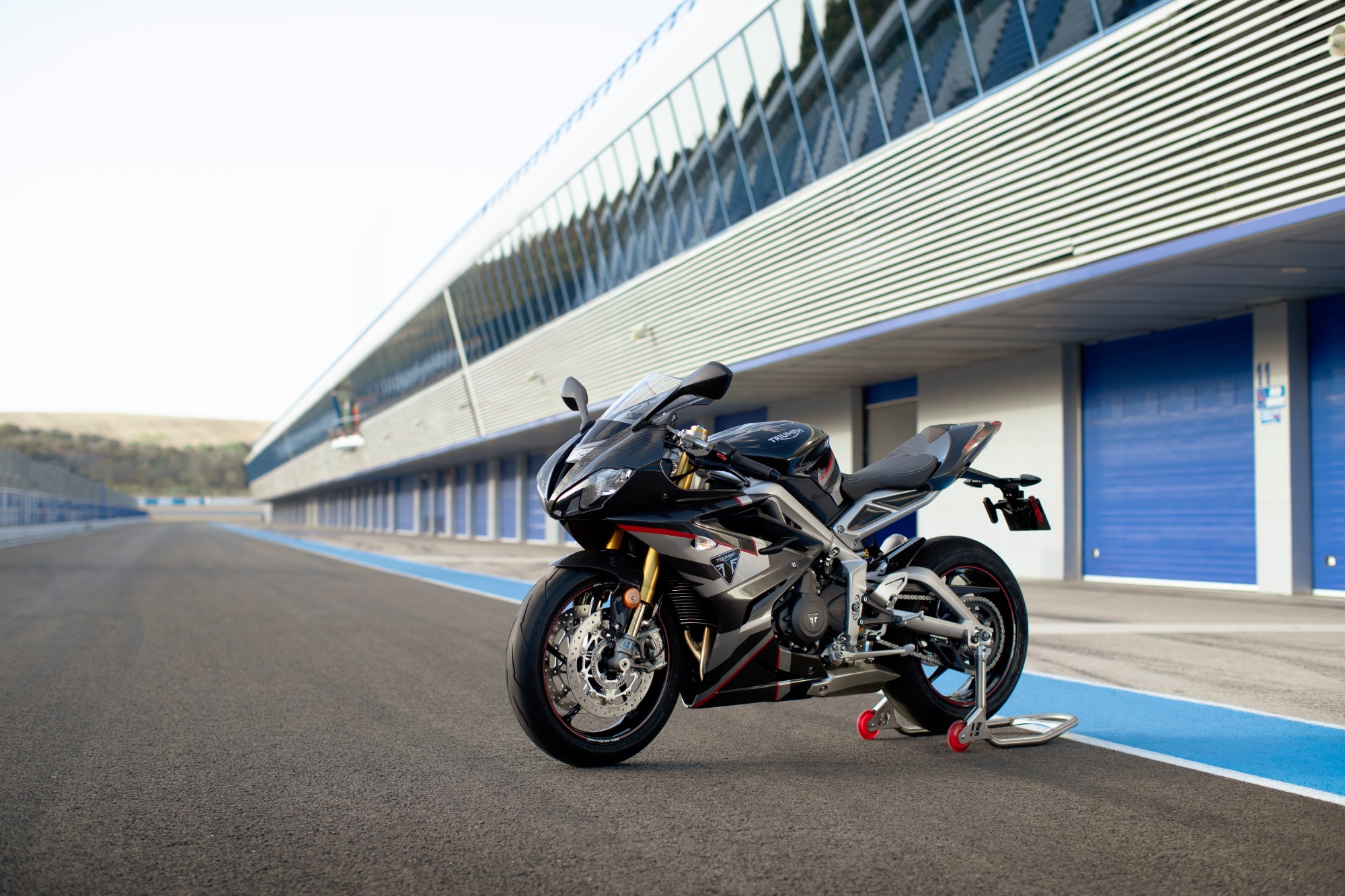 The ultimate edition of Triumph’s
legendary multiple Supersport Championship-winning Daytona is here – the new Triumph
Daytona Moto2TM 765 – the closest you can get to a genuine Moto2TM
factory ride for the road. 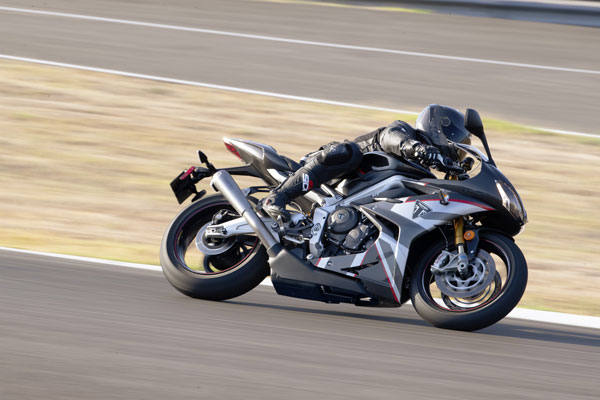 (Above) A new Triumph Daytona Moto2 765 Limited Edition at speed.

One of the most famous wins in
Triumph’s racing history, the 1966 Daytona 200, saw Buddy Elmore spectacularly
race from 46th on the grid all the way to first place, taking the
checkered flag aboard a prototype Triumph T100 Tiger – a dramatic victory that inspired
the first Triumph ‘Daytona’ model designation.

Returning to the Triumph lineup in
the early 1990s, the Daytona reinforced its legendary position as the most successful
name in Triumph’s celebrated racing heritage with the triple-powered 675winning at the Isle of Man TT, the British,
German, French and World Supersport Championships, and again at the
world-famous Daytona 200, claiming a dominant victory in 2014. With Peter
Hickman’s stunning Supersport victory at this year’s Isle of Man TT, the Triumph
Daytona continues to make its case as the best middleweight sportbike in the
world.

A dynamic testament to Triumph’s exciting return to
the top tier of racing, the new Daytona Moto2TM 765 Limited Edition
represents the highest-ever specification of this British racing legend. The
exclusive engine supplier to the Moto2 TM World Championship,
Triumph’s new Daytona Moto2TM 765 Limited Edition is a celebration
of the unique partnership with the FIM FIM MotoGPTM World
Championship.

Designed by the same expert team
that developed the record-smashing Moto2TM engine, the new Daytona
Moto2TM 765 Limited Edition features a unique new Moto2TM-derived
triple powerplant delivering Triumph’s highest ever power and torque from a
production 765. With peak power of 128 HP at 12,250 rpm and peak torque of 59 LB-FT
at 9,750 rpm, the new engine delivers race-bred power and performance for the
road – the exciting upgrades can be felt low down and across the entire rev
range by way of a uniquely tuned advanced ECU from the Street Triple RS.

Boasting an all-new gearbox with
track optimized gear ratios and a first gear ratio directly informed by the
Moto2TM engine development program, the new Daytona truly is the
closest you can get to a genuine Moto2TM factory ride for the road.

The highest ever specification of
Triumph’s championship-winning racer, the new Daytona Moto2TM 765
Limited Edition will feature superbike-spec lightweight Brembo Stylema®
brakes. Compact and carefully sculpted, these are Brembo’s top-performance
brakes, chosen for their immediate response, durability on track and quick
cooling characteristics. Other premium components from Brembo include the span-
and ratio-adjustable brake lever and MCS radial master cylinder.

The eagerly anticipated new Daytona
Moto2TM 765 Limited Edition shares the same precision-perfect chassis
as the Moto2TM engine development prototype and the BSB Championship-winning,
multi-time Isle of Man TT Supersport race-winning Daytona R. This is due to its
unbeatable agility and precision, which, on top of the highest ever
specification, makes this new model the most dynamic and precise handling
Daytona ever produced.

Designed for exceptional road and
track capability, the new Daytona has a pure single seat set-up, reducing
weight and reinforcing its sporting intent. There is also a new, smoother,
track-optimized seat material that enables easier rider movement across the
seat. A race-inspired rear pad integrates
into the rear bodywork.

The most
technologically advanced Daytona ever

Also for the first time ever on a
Daytona, riders can take advantage of five new riding modes enabled via
ride-by-wire – Rain, Road, Rider Configurable, Sport and Track – all of which
adjust the throttle map, Traction Control and ABS settings to suit the riding
style and road conditions.

features standard Triumph Shift
Assist – the up and down quickshifter for clutchless gear changes – perfect for
focused riding and track enthusiasts.

Simply put, it is the most
technology offered on a Daytona, ever.

Completing its performance-focused
poise and style, the main frame and swing arm have a distinctive clear anodized
finish, significantly reducing weight versus traditional powder coating. This, along
with the elegant twin headlight, rear paddock stand bobbins and LED indicators,
make the stylish new Daytona Moto2TM 765 ready for any road or
track.

With a limited run of only 765
motorcycles for the United States and Canada and 765 for Europe, Asia and the
rest of the world, the new Daytona Moto2TM 765 Limited Edition is a rare,
special and truly unique machine. Each bike features a beautiful billet-machined
Moto2TM-branded aluminum top yoke displaying its laser-etched unique
limited edition number.

With over 35 Genuine Triumph Accessories
available for this new model, customers can tailor their Daytona to meet their own
personal preferences through a range of styling, protection and security features.
New accessories include scrolling LEDindicators with gloss black cast aluminum
bodies, plus a beautiful machined aluminum rear brake reservoir with a laser-etched
Triumph branded lid. Additionally, riders can add engine and fork protectors
and a tail tidy.

The closest you can get to a genuine Moto2TM factory ride for
the road is here – the new Daytona Moto2TM 765 Limited Edition is the
first ever official Moto2TM Dorna Sports-licensed motorcycle and a
thrilling new chapter in the legendary racing pedigree of the Triumph Daytona!