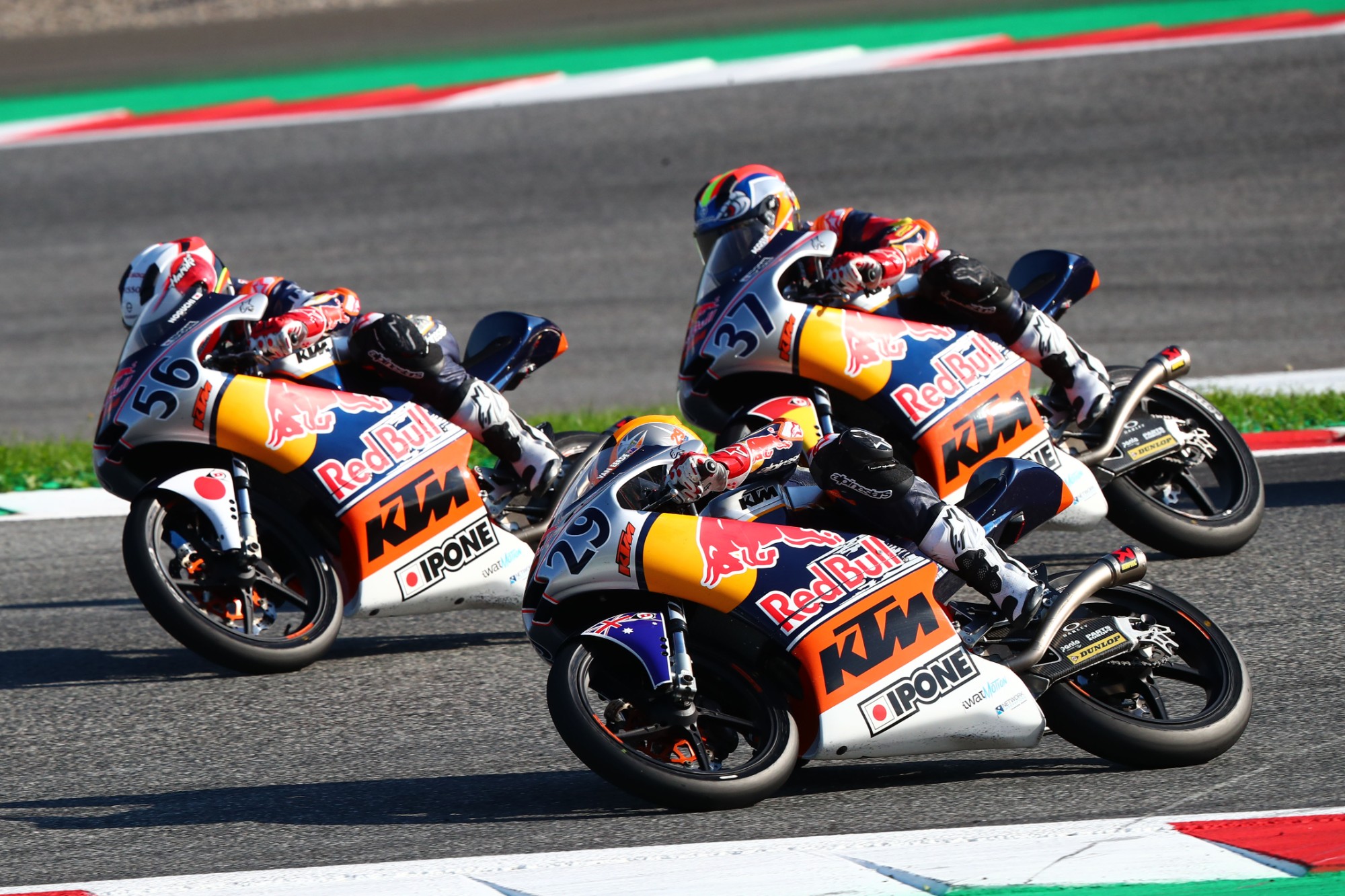 Editorial Note: American Tyler Scott is not competing in Austria. Scott crashed during the European Talent Cup race July 14 at Motorland Aragon and injured the ring finger on his left hand, requiring surgery and forcing him to miss this weekend’s event.

A photo finish gave Pedro Acosta victory over Billy van Eerde and Haruki Noguchi in an incredible Red Bull MotoGP Rookies Cup Race 1 in Austria. Sensation from start to finish with run-away points leader Carlos Tatay given a ride-through penalty for a jump start along with fellow front row sitter Marcos Uriarte who was rolling while the crowd were still taking their seats.

In beautiful sunshine, Tatay and Uriarte recovered to score 2 and 1 points respectively but it very much keeps the Cup alive as Acosta has slashed Tatay’s advantage to 54 points. Yuki Kunii is only 49 behind Tatay but the Japanese 16-year-old misses both races this weekend through injury.

It was at least a lead battle of twelve KTM RC 250 Rs and no one even looked like breaking away. In the closing stages it was Acosta, van Eerde and Noguchi who seemed strongest but the result was still wide open and the win only decided on the dash from the last corner to the flag.

Acosta on the line

“An incredible feeling,” enthused 15-year-old Spaniard Acosta who won a few weeks ago at the Sachsenring. “I won that when the race was red flagged so this is much better. I had a good feeling going into the race because in FP1 and FP2 my times were good. I made a bit of a mess of Qualifying so only started ninth but I managed to get to the front quickly.”

“At the end I didn’t want to lead, there are so many places to pass here, straights to slipstream, I just wanted to be third or second and I managed that. Then the last corners just worked perfectly but it was so close. It was so close, Noguchi touched me coming through the last turn but it was really such a nice fight, great fun,” concluded Acosta.

Van Eerde on the podium

Van Eerde had lost a podium in Race 2 at the Sachsenring because of exceeding track limits but not this time. “Finally,” smiled the 17-year-old Australian. “It was such a great race, I just kept pushing and never gave up. I wasn’t so happy with the bike in Qualifying and was only 11th on the grid. It was a bit unstable but I talked to Santi (Suspension engineer Santiago Morralla) and he had it sorted for the race. In the last corner Noguchi came across and I lost my drive just a bit but I’m so happy to get on the podium.”

Noguchi on a mission

Noguchi picked up his third third of his first Rookies Cup season. “Not perfect,” admitted the 18-year-old Japanese with a shake of the head. “I had two or three plans for the end of the race but they didn’t quite work on the last lap, I still had a plan for the last corner as I’d watched the videos from the last few years, it almost worked but not quite.”

“Tomorrow I will try again. I did change the bike after qualifying but for tomorrow we will go back a bit and I hope that can make the difference, I want to win,” asserted Noguchi.

A very close fourth was French 14-year-old Gabin Planques whose previous best was 11th in Race 2 at the Sachsenring. He still wasn’t overjoyed. “My last lap just didn’t quite work out so I missed the podium.” So where has the improvement come from? “I don’t know,” he admitted shyly. “At the Sachsenring I was doing well but dropped back at the end, I felt tired. I was determined not to let that happen here. I have been training more and I just didn’t let it happen.”

Pole man Alex Escrig was in the lead group but ran off the track with a few laps to go. “Another rider came inside and I couldn’t turn,” explained the 15-year-old Spaniard. “I went in the gravel but then the engine stalled.” So none of the front row featured in the final podium contest.