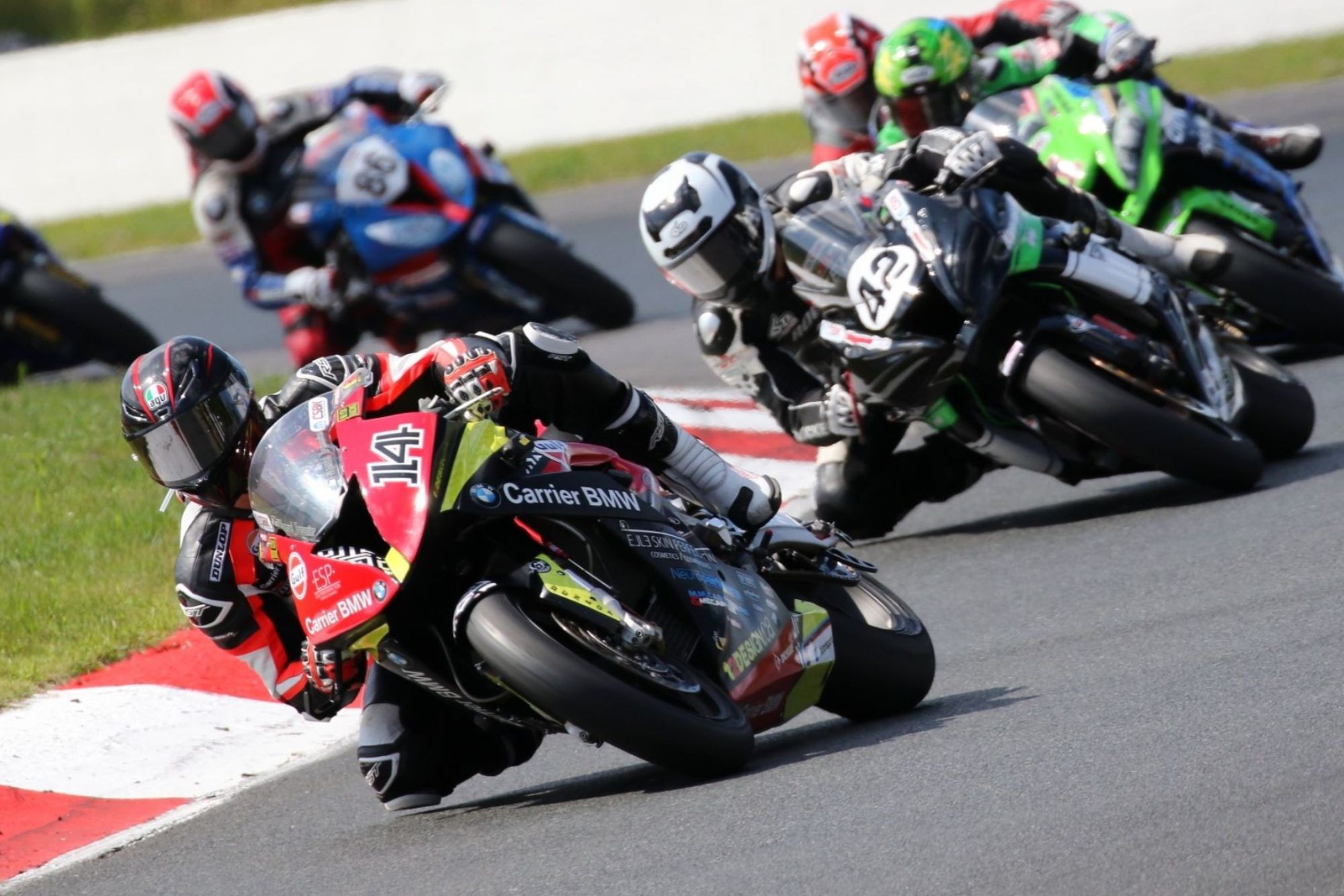 Bowmanville, ON – August 10, 2019 – The Canada Cup changed hands for the first time in four seasons on Saturday, as Ben Young officially clinched the 2019 Mopar Pro Superbike crown with a third-place finish in race one of the Mopar Canadian Superbike Championship season finale weekend at Canadian Tire Motorsport Park, presented by BMW Motorrad.

Young entered Saturday’s action with a commanding 59-point lead atop the feature class standings, but his dominant season was almost put in jeopardy by an early morning crash in qualifying.

Despite the incident, his team was able to repair his Liqui Moly/Barrie Trim BMW S1000RR enough for his pole position to become official, his fourth pole of the year in five rounds, which stretched the Collingwood, ON native’s lead to 62 points.

With just 52 points up for grabs in Sunday’s race, Saturday afternoon represented the opportunity for Young to clinch his first ever CSBK crown, but the 26-year old was forced to deal with perhaps his most exciting task yet as the entire top ten of the 34-entry grid was separated by just over a second with a handful of laps to go.

Among the front-runners of that group were Young’s two biggest rivals, Jordan Szoke and Samuel Trepanier, who were looking to settle some history of their own at the front of the pack alongside former race-winner Kenny Riedmann. Szoke, the four-time defending champion, needed to put some distance between himself and Young to have a shot entering Sunday, with his number one plate on the line for just the second time since 2011.

Ultimately, a last-lap push was not enough to displace Trepanier, who finally scored his first career Pro victory after years of heartbreak, while Young made a late push of his own to finish third behind Szoke – ending his day with a 57-point lead and his first ever National championship in hand.

“The feeling is just incredible, I can barely put it into words to be honest,” an emotional Young said. “We started on the harder tire, and it was tough at first and I thought maybe we’d have to wait until tomorrow, but the tire started to heat up towards the end and I was able to catch that group again.”

“Once I saw Jordan’s number-one plate, I knew I wanted to take it away from him and get my own,” he continued. “I’m really blessed to have so much support, both from BMW and the team, but from all the fans as well. I owe this title to them.”

Unfortunately for Trepanier, the fan-favourite’s breakthrough moment was overshadowed by Young’s championship victory, but the St. Isidore, QC native embraced the moment nonetheless after a terrific performance aboard his Blysk Racing/Gulf BMW.

“It was here a couple years ago that I almost won my first race, so I knew I had to do everything I could to make up for it here today, and it just feels phenomenal,” Trepanier said. “Jordan actually made a push on me at the end, and I knew I had to get the drive to hold onto it, and I was just so happy to beat him to the line. My team works so hard, so I need to dedicate this first win – first of many I hope – to them.”

The pair of emotional victories were met by emotional defeat at the podium for Szoke, who entered Saturday in unfamiliar territory and will leave race one in an even more uncomfortable position.

The Lynden, ON veteran tried to keep things in perspective as he prepares for the final year of a two-year contract with Kawasaki, but the frustration was evident after failing to secure his record 14th National crown in his first year aboard the Mopar Express Lane ZX-10RR machine.

“After switching back to Kawasaki this year, it’s been tough. Not because of the bike – it’s been great – but it’s been an adjustment, and I’ve made a few mistakes that I usually never make,” Szoke said. “Ben hasn’t placed a foot wrong all year, even after that crash this morning, so I knew the focus was going to be on next year. Obviously, hat’s off to him and Sam, and they’ve earned every bit of this.”

Just missing out on the final podium spot behind Young was 20-year old rising star Tomas Casas, who entered fresh off his first ever Pro Superbike podium and nearly scored his second in a row aboard his Parts Canada Yamaha YZF-R1, while his teammate Trevor Daley rounded out the top five aboard his Parts Canada Suzuki GSX-R1000R despite starting from eleventh.

Notably missing from the top of the results was Riedmann, who was all over Trepanier in the early stages and even led a handful of laps in his return to the series after only appearing in the season opener. Unfortunately, the Sturgess Cycle Kawasaki rider came out on the losing side of an incident involving Szoke and a lapped rider, as his attempt at a comeback victory ended early for the Belfountain, ON native.

The Liqui Moly Pro Sport Bike class drew closer to a new champion of its own on Saturday, as points leader Will Hornblower extended his grip atop the standings with a second-place finish aboard his Bickle Racing Yamaha YZF-R6.

The Sarnia, ON native entered with a 33-point lead over two-time defending champion Casas, and was able to stretch that lead to 38, but his damage was limited by a thrilling victory from Turcotte Performance Kawasaki ZX-6R rider Sebastien Tremblay.

The Mirabel, QC native led virtually start-to-finish despite constant pressure from Casas and Hornblower, as he looks to cap off a frustrating season to at least secure third place in the standings behind his Yamaha counterparts.

“It was a bit of a weird race, because the wind was really strong on the back straightaway, but I was able to make up for it in the last few corners, and so I tried to use that to my advantage” Tremblay said. “We built this bike in basically nine or ten days, so it’s really cool to be up here so quickly, but hopefully we can do it again tomorrow and end the season strong.”

With a maximum of only 52 points remaining, Hornblower will need only to finish 12th or higher on Sunday to secure his first ever National title, but his result on Saturday hardly came with ease after edging Casas by just 0.002 seconds at the finish line. Despite the thrilling finish, it continued the 24-year old’s improbable run of finishing top-two in every race this season, something no other rider has done in any class.

“That was a close race from start to finish, especially between us three, and I knew it was going to come down to the wire but I didn’t think it would be that close,” Hornblower laughed. “Tomas kept getting me in the last corner, but I was able to get the drive out and edge him to the line, so we just need to work on fixing that tomorrow and hopefully we can wrap this thing up.”

As for Casas, it’s another tough break for the Parts Canada Yamaha youngster, who had fought back in his quest to win a third straight title but has since seen that mid-season surge slip away as Hornblower inches closer to taking his crown.

“Oh man, what a crazy finish! I thought for sure I had him at the line, but I ran it in a little too wide and he must have got the drive on me,” Casas said. “The track was really hot from the start so the pace was good, but I just couldn’t make a move stick on Will at the end, which is a little disappointing for the championship but a lot can still happen.”

Hornblower may not be responsible for Yamaha’s only championship this season, however, as 16-year old Ben LeClair extended his points lead in the TSN Motorcycle Experience Lightweight Sport Bike class with a dominant victory aboard his bLU cRU Yamaha YZF-R3.

“I was looking at the qualifying times and I knew I had the pace to win it, so I just tried to check out early and ride my own race,” LeClair said. “I put in a lot of consistent laps, and I was able to stretch a gap and ride it out to the line, so hopefully we can do the same thing tomorrow to win the championship.”

The youngster was able to grab an early lead and cruise virtually untouched to the finish line, extending his hold atop the standings to 38 points after a disappointing fourth-place result from rival Avery Hart aboard his WRBF Racing Yamaha.

LeClair will also have the chance to make history on Sunday with his older brother, Jake, after the 18-year old sensation earned a strong second-place finish aboard his bLU cRU Yamaha YZF-R6 in the Parts Canada Amateur Sport Bike class, though he was unable to come out on top of a thrilling battle with fellow teenager Jared Walker.

Making just his second appearance of the year, Walker was able to win from pole position aboard his Kawasaki ZX-6R Ninja, limiting the damage done by LeClair as he hunts down championship leader Christian Allard, who holds a 13-point lead after finishing third aboard his Turcotte Performance Kawasaki.

It was also a first career National victory for Quebec City, QC youngster Samuel Guerin, who dominated in just his second appearance of the season aboard his Aprilia RSV4RR in the Mopar Express Lane Amateur Superbike category.

The battle to watch was won by Allard, however, who finished second in his first weekend aboard a BMW S1000RR machine, just narrowly defeating points leader and Turcotte Performance teammate Guillaume Fortin. As a result, Fortin will take a 16-point hold over Allard into Sunday, with the Kawasaki ZX-10R rider looking to fend off his surging teammate and score his first National title.

Full results from Saturday’s action, including the schedule for Sunday’s final day of racing in 2019, can be found on the series’ official website at www.csbk.ca.