Press Releases From This Past Weekend’s Various Motorcycle Road Races

Press Releases From This Past Weekend’s Various Motorcycle Road Races 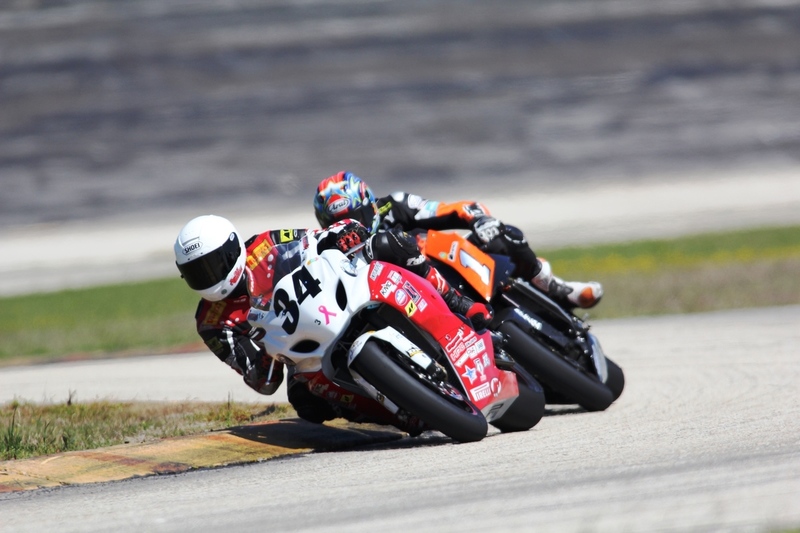 FULL HOUSE FOR KELSEY @ TEXAS WORLD SPEEDWAY Georgetown, Texas rider Danny S. Kelsey posted three wins, two second place finishes, and gained valuable championship points at Texas World Speedway. The second round of the CMRA Sprint Championship Series provided a great opportunity for the team to continue development on the new Suzuki GSX-R1000 and refinement of its trusted GSX-R750. Races would be held with a record turnout for the CMRA, so competition would be tight. Friday practice went well for the team despite a full track. The team discovered some good baseline settings for the Pirelli shod Suzuki GSX-R1000 and was able to run as fast as 1:45.1 despite the intense traffic. Crew chief Marcus McBain fine-tuned both Suzuki’s Saturday with new valving for the GSXR-750 JRi Shock and adjustments to their GP Suspension cartridges to complement new clutch setups for both team bikes. As Sunday morning practice started, a cold front that moved through Saturday evening caused havoc for many racers and unfortunately the team itself as 38 degree temperatures and 40 mph wind gusts created a treacherous and dangerous environment. The CMRA wisely postponed some of the schedule to allow the temperatures to come up. Unfortunately, Kelsey was one of over a dozen crash victims in turn nine during the morning and the team’s GSX-R750 was heavily damaged. The crash occurred despite Danny going “half speed” and underscored how tricky the track had become with the winds and temperature that greeted riders on Sunday. McBain was able to complete repairs in time for the start of the 750 Superstock race that would be the second race of the day. Kelsey lined up for the start of the 750 Superstock race and jumped into the lead on lap one while ensuring the Suzuki would be “ready to run at the limit” after being repaired in the morning. The weather conditions showed almost all racers were three seconds off the “regular pace.” Kelsey, however, put the hammer down to turn the fast lap of the race on lap two and was able to cruise to a 4.1 second win. The race was a relief for Kelsey as the winds were literally picking bikes up as they ran through turn one at over 120 mph and to be able to safely race at the pace he was setting was a relief to the team as well as other racers. Open Superstock would be Kelsey’s first opportunity to put the DP Brakes-equipped GSX-R1000 through its race pace for Sunday. As the electronic lighting system started the race, Kelsey took the holeshot and began to immediately build a lead. Danny would again set the fastest lap of the race on lap two en route to victory. Kelsey rode as fast as he needed to win as the entire field showed mother nature the respect she is entitled to. Next up for Kelsey was Formula One. As the green flag dropped, Kelsey lead off the line and fought to get any type of gap on second place. As lap two completed, Kelsey was in second shadowing the first place rider with both riders running in the 1:44’s and quickly separating themselves from third place. The high speed chess match continued with Kelsey taking the lead entering turn one as the crossed flags were shown. Kelsey fought to maintain the point trying to put the race on ice, but unfortunately surrendered the lead. Kelsey worked to draft back into the lead, but came up 0.059 seconds short. Kelsey would be facing tough competition again in just a few races as most of the field was scheduled for a rematch in the Open Superbike class. Kelsey provided critical input to his crew chief for changes and hopefully up his pace. As the green flag dropped for the Open Superbike, Kelsey entered turn one in second place. Danny moved to the point in turn five and the two lead riders began chapter two of their high speed chess match. Kelsey set the pace initial pace and posted a 1:43.6 on lap two. On lap 3, Kelsey surrendered the lead in Turn 8. Kelsey shadowed the lead rider, and waited to make a draft move on the final lap. As the two riders entered the front straight for the checkers, Danny put down his best drive of the day on the banking, but came up 0.089 seconds short of victory. Kelsey was frustrated with the result, but also realized the team was able to get the big Suzuki 1000 working amazingly well despite treacherous conditions that claimed many riders during the weekend’s racing. “I am really excited about what we got accomplished today with the development of our bike. There are only a handful of riders that have ever run a 1:43 pace or faster at TWS. Most of them have been top National riders. For us to get that done on our second weekend of riding this bike in this weather is just flat out amazing. It speaks volumes for Danny and our sponsors products that he accomplished the lap times he did,” observed crew chief Marcus McBain. Despite the exhaustion of the day’s races, Kelsey lined up for 750 Superbike to complete his busy Sunday schedule. In the race, Danny took the lead on lap one and posted a 1:45.7 on lap two put the race on ice and take a comfortable third victory for the day. The three wins and two runner-up spots stretched Kelsey’s lead for the CMRA #1 plate. Danny Kelsey will continue to contest the entire CMRA series in his efforts to regain the number one plate. The team would not be able to compete at this level without the special efforts of KMC Controls, RS Taichi, Pirelli, Dynojet, Vortex, Motoliberty, South Central Race Center, Motopia, M4 Exhausts, DP Brakes, K’s Motorsports, GP Suspension, JRi Shocks, Lone Star Track Days, Shoei Helmets, Hotbodies Racing, Silkolene, WRW Racing, and Chicken Hawk Racing. Kelsey will resume racing action at Eagles Canyon Raceway during the third round of CMRA Sprint Championship Action.