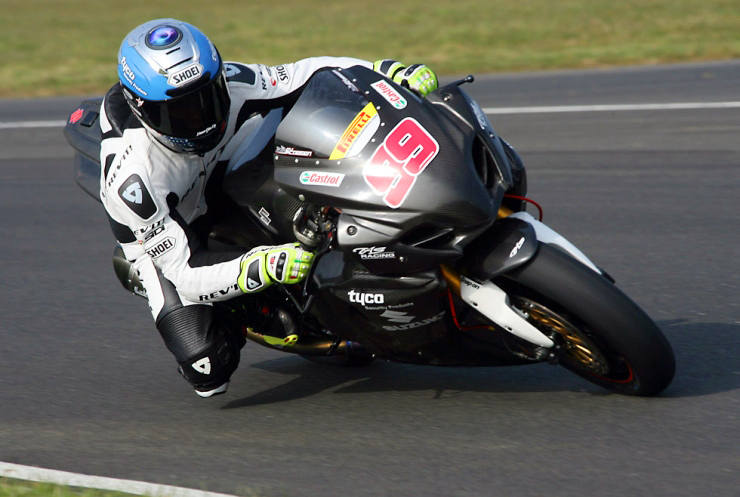 Tyco Suzuki’s Josh Brookes, PJ Jacobsen and Taylor Mackenzie completed a successful opening test prior to the start of the 2013 British championship season earlier today at Kirkistown in Northern Ireland.

For 19-year-old American Jacobsen (pictured), it was his first taste of Superbike action aboard the team’s GSX-R1000 and he relished every minute of it alongside his more-experienced team-mate Brookes, who was in blistering form, despite the low spring temperatures.

New Supersport recruit Taylor Mackenzie didn’t get on track until late afternoon because of fog and flight delays, but eventually got his chance to later and sing the praises of the championship-winning GSX-R600.

“It was great to be back out on track and despite coming from 30-degree heat at home in Australia to single-digit stuff here at Kirkistown, we completed a successful opening day. I got within a few tenths of my quickest-ever lap-time around here, despite the cold conditions and using our new Ohlins Suspension for the very first time, so I’m pleased with how it all went.”

“It was just like, Wow! There’s a lot to learn as there are so many things on the Superbike compared to the Superstock bike, and it will take a couple of tests to get 100 per cent comfortable, but all in all it was a progressive day. I was surprised how smooth and usable the power was on the Superbike and by the end of the day we were doing consistent lap times. I’m pretty pleased how we have started and I’m looking forward to day two on the big Suzuki.”

“It took a while to get here today, but I’m happy; really happy. The bike felt really good. I like the characteristics of the GSX-R600 and although it started to get very cold towards the end of the last session, I just wanted to do more laps. First impressions are really good and I’m just looking forward to more riding tomorrow.”

“It’s always good to get the boys over here on this side of the water, and although quite a bit colder than Josh has been used to, he had a good safe and consistent day, as did PJ and also Taylor in the afternoon. We’ve made quite a few changes this season; the major one moving to Ohlins suspension and although we didn’t quite know what to expect – the initial feeling is very, very good, which Josh proved being so close to his best-ever lap around Kirkistown in not exactly ideal conditions.”