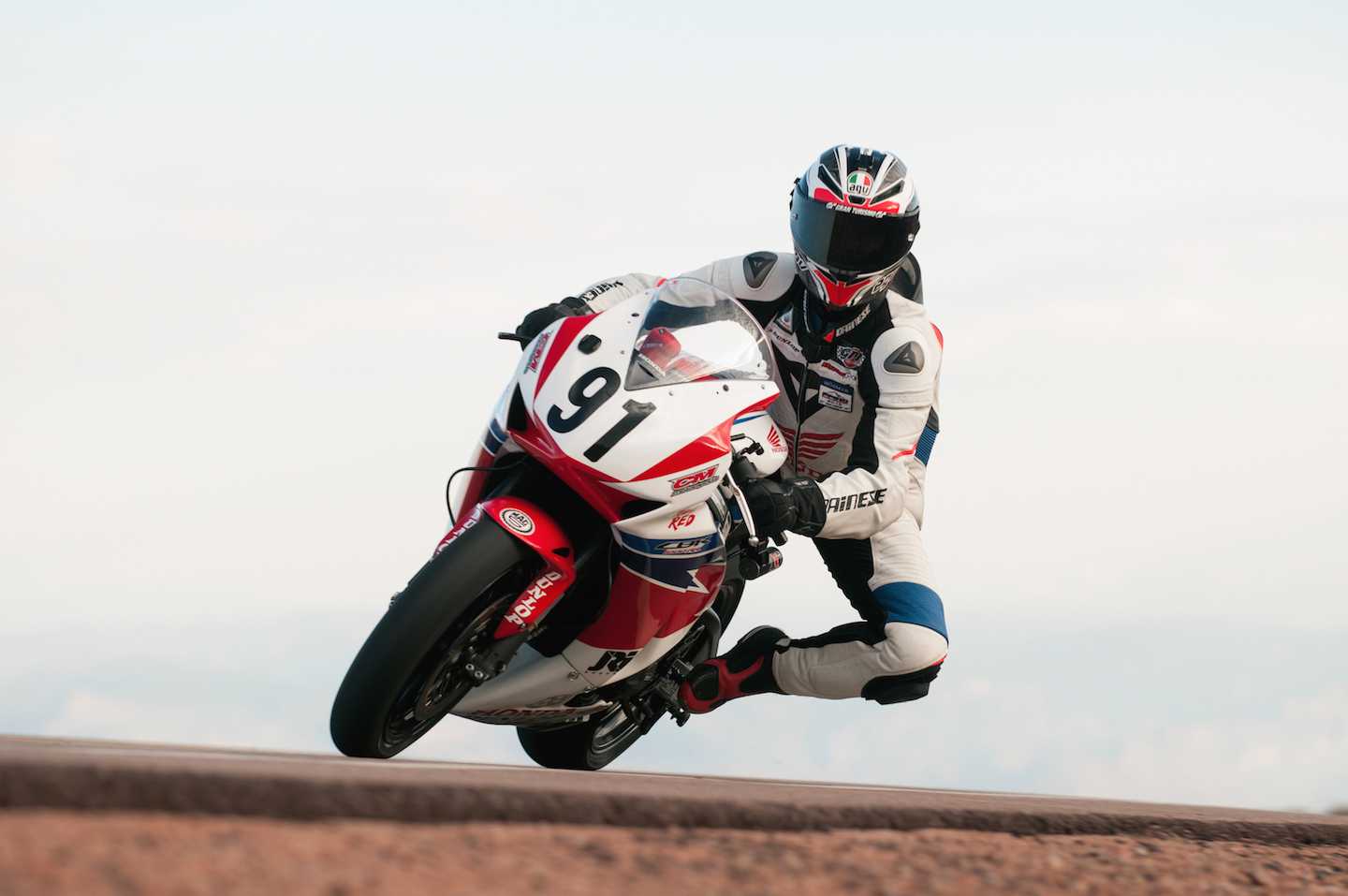 The rules regarding motorcycles eligible to race in the 2016 edition of the Pikes Peak International Hill Climb (PPIHC) have changed. Event organizers have reverted back to a previously-used rule that mandates all motorcycles must be originally produced with a one-piece handlebar, essentially outlawing racer-replica motorcycles that come with clip-on handlebars and the sportbikes that took the overall victory at the last two events.

In 2015, Jeff Tigert took the top motorcycle honors at the PPIHC while riding a Honda CBR1000RR, and in 2014, Jeremy Toye was the fastest motorcyclist at the PPIHC aboard his Kawasaki ZX-10R.

The rule requiring motorcycles to come with a one-piece handlebar was previously in place for many years, which wasn’t an issue because portions of the 12.42-mile, 156-turn public road course were not paved, making motorcycles with clip-ons and limited steering lock less than desirable, even if they had been legal.

Once the course was completely paved in 2011, race times dropped sharply, and once the handlebar rule was changed, sportbikes with clip-ons became more popular in some classes.

Carlin Dunne, riding a Ducati Multistrada 1200, set a new motorcycle course record of 11:11.329 in 2011, before the course was completely paved. The next year on a fully-paved course, Dunne rode a Ducati Multistrada 1200 to a new record of 9:52.819, a record that stands today. Dunne then set the fastest time (10:00.694) during the 2012 PPIHC on a Lightning electric-powered motorcycle fitted with clip-on handlebars.

When first tipped off about a possible rule change, Roadracingworld.com contacted PPIHC Executive Director Megan Leatham to confirm the rule change requiring a one-piece handlebar and asked why it was being reinstated.

“The PPIHC motorcycle program is faced with many challenge considering what has happened over the past two years with fatalities and injuries,” Leatham wrote in an e-mail to Roadracingworld.com.

On June 29, 2014, Bobby Goodin, of Flower Mound, Texas, died from injuries he sustained when he crashed his Triumph Daytona 675R immediately after crossing the PPIHC finish line at the 14,110-foot summit.

On June 25, 2015, Carl Sorensen, of Centennial, Colorado, died from injuries sustained when he crashed his Ducati 848 during practice for the PPIHC and flew off a cliff.

Both Goodin and Sorensen were experienced in competing on purpose-built road courses as well as racing at the PPIHC.

Goodin and Sorensen were the fifth and sixth racers, respectively, killed during the 99-year history of the event.

“To be honest,” Leatham continued, “there was a lot of talk on the insurance side as well as from the BOD [Board of Directors] about eliminating the motorcycle program completely from PPIHC.

“Although we understand that PPIHC is inherently dangerous and deaths and injury may occur regardless of what type of bike someone is riding, the decision to make it mandatory to have one-piece handlebars was made based upon the type of bike the committee and BOD is comfortable allowing to race Pikes Peak.

“Once the Committee and BOD determined to keep the motorcycle program in place, changes regarding the bike program had to be made. One common factor in both fatalities was the type of bike both competitors were riding and the BOD is no longer comfortable allowing that type of bike on Pikes Peak.”

When asked what is it about motorcycles with one-piece handlebars that make them better suited for racing the PPIHC as opposed to motorcycles with clip-on handlebars, Leatham referred us to Jim Vidmar, PPIHC Assistant Director of Competition.

“With the incidents over the last two years and input from the PPIHC board of directors, insurance company and others the decision was made to limit the eligible motorcycles for 2016,” Vidmar wrote to Roadracingworld.com. “The hope is the motorcycles with one-piece handlebars like the Ducati Multistrada will be more adaptable to the course and course conditions that riders face on Pikes Peak.”

In the e-mail, Roadracingworld.com pointed out that many sport motorcycles currently being manufactured and sold with one-piece handlebars can easily be tuned to produce the same horsepower and speed as motorcycles produced with clip-ons. Vidmar responded by writing, “We are fully aware of this and that is why we will be closely screening both the rider and motorcycles that are submitted as an entry. Even if a motorcycle fits the rules it is not guaranteed to be accepted. The riders will also be screened prior to acceptance.

“We are striving to strike a balance that will allow motorcycles to continue to compete on Pikes Peak but minimizes the risk as much as possible. We are fully aware we will never eliminate the risk completely, but we are taking steps to make the race as safe as possible.”

“I don’t understand it,” said Tigert. “I don’t know if they’re trying to bring some kind of safety aspect to it by outlawing those kind of bikes [with clip-ons]. Me, personally, I don’t see that being any safer. I don’t understand where their direction is coming from.”

The Pikes Peak International Hill Climb, the 100th anniversary of the event, is scheduled for June 26, 2016.

World Superbike: Race One Moved To Sunday Morning At Jerez

Always in our hearts, Dean A minute’s silence in memory...
Read more
Feature