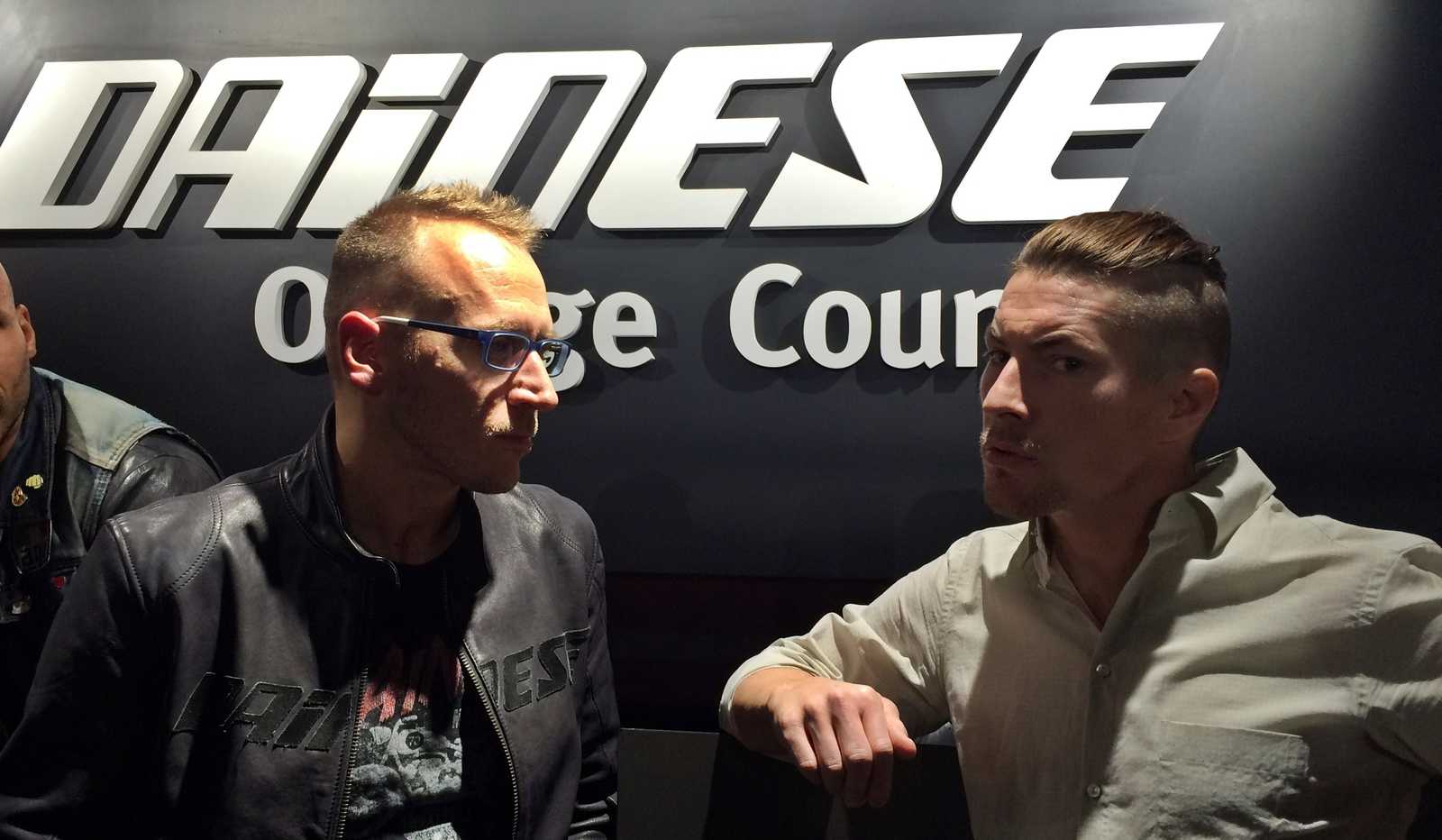 Dainese/AGV entered the North America market by opening a store/corporate headquarters in Costa Mesa, California back in 2004. Since then, the company’s operations have expanded to the point where it needed a new headquarters, so that division moved out of the original building. Dainese remodeled the place, installed a repair and alteration center and threw a party to celebrate.

Roberto Sadowsky, vice president of Dainese USA and AGV USA, talked to Roadracing World at the December gathering at the remodeled facility about the company’s ongoing expansion and evolution, new protective technologies and fashion.

Combining fashion and expansion, Sadowsky said the company soon will add a fourth store in North America as part of the Ace Cafe project in Orlando, Florida, something Sadowsky describes as a “big motorhead venue.” Dainese also has taken note of the growing “lifestyle” segment of the market, with the popularity of the original Ace Cafe in London, the success of high-end boutiques like Deus Ex Machina and the success of events like the “Wheels and Waves” festival in Europe.

“The majority (of sales) are still regular, functional, sport jackets, whether leather or textile, but there is a big trend in this (lifestyle) field. It’s coming, I think, originally from Japan. They’re still at the forefront of the new trends,” Sadowsky says.

“It’s a niche, and it’s not an easy one, because they’re–it comes from people who like fixing their bikes, they like older bikes, they buy cheaper bikes. They like working on their bikes. So they don’t pay as much attention to their gear. They want to look cool, they’re kind of ‘hipster,’ yeah? The new word that everybody uses? They don’t spend so much money on gear. Even the safety awareness is slightly lower. So you have to do stuff like hidden protection, a compromise. They don’t want to step off the bike and look bulky, look like Valentino Rossi.”

For those for whom protection is paramount, Dainese has been at the forefront of the inflatable (airbag) protection movement. The company brought its D-air track suit to North America in October, and is planning on expanding the technology to more garments in 2016.

“We’ve already had a few suits back, which is good, because people are using it, correct? This system has been around since 2009, which is when the MotoGP racers started using it. This is the, let’s say, the 2.0 version. It is an updated version. Worldwide, it’s doing great, because we also made it a little bit affordable. The first version was like $4,000, and it wasn’t sold here. This one is made more affordable, $2,500. It’s not unreasonable,” Sadowsky says.

“We brought it to North America–it was basically as soon as possible! We were waiting for the new version. You pre-buy raw material, you pre-buy hardware and software for the old one, and we were waiting to run out of that. And then we wanted to focus on our core market, which is Europe, and service it well because the production capacity wasn’t great. Now with the new version, the production capacity is like any other garment. So we were finally able to bring it to North America.”

The next step is an airbag system for street riders, Sadowsky said. “Right now, we are talking about a race suit, a track day suit. Next is to make it available for the street rider, which is happening in North America in the middle of 2016. It is going to be bigger, and it is going to be covering the chest and a little bit of the back. It’s going to be wireless, it’s going to be the same system. We started selling it in Europe in November, and this time we’re not going to wait four years to bring it to North America! Our vision for the future is that basically any protective jacket for motorcycling should have an integrated airbag. We have seen it in cars–every car comes with an airbag system. We want to see the same for motorcycles.”

It might be hard to envision such common usage of airbags for street riders, but it was only a few years ago that International-level racers wanted nothing to do with inflatable protection, Sadowky says.

“Racers were reluctant to use our airbag to begin with. They’re very conservative. It’s all about the weight, they’re superstitious: ‘It always worked that way! I don’t want to change it!’ So eventually we had the first adopters,” Sadowsky says.

“And when Valentino Rossi started to use the system, I believe it was 2010, everybody wanted it. And now every one of our racers uses it and no one wants to go back. Actually, other brands’ racers wanted it, so we made it an open platform, and more and more brands are coming on board. It’s basically an undersuit with an airbag integrated, so we have (other manufacturers) modify the suit so it can host the airbag. It needs to be able to expand slightly when the airbag goes off.”

Speaking of modifications, the company is using the newly available space at the Costa Mesa facility for a repair and alteration center in North America, Sadowsky says.

“This is the first store in North America, it opened in 2004. We had our North American headquarters here as well. We outgrew the space so we moved out. Since then, the space was open, and the store was getting older, so it was time to remodel it. And also because we wanted to add our repair center here,” Sadowsky says.

“What we are doing here now–we just moved from Italy a lady that has been working for 23 years for the company, a tailor. She arrived last night! She barely speaks English! She wanted to change completely her lifestyle and accept this new challenge. So she came overseas. We’re setting up for her a lab, a shop. We are glad to have her on board.”