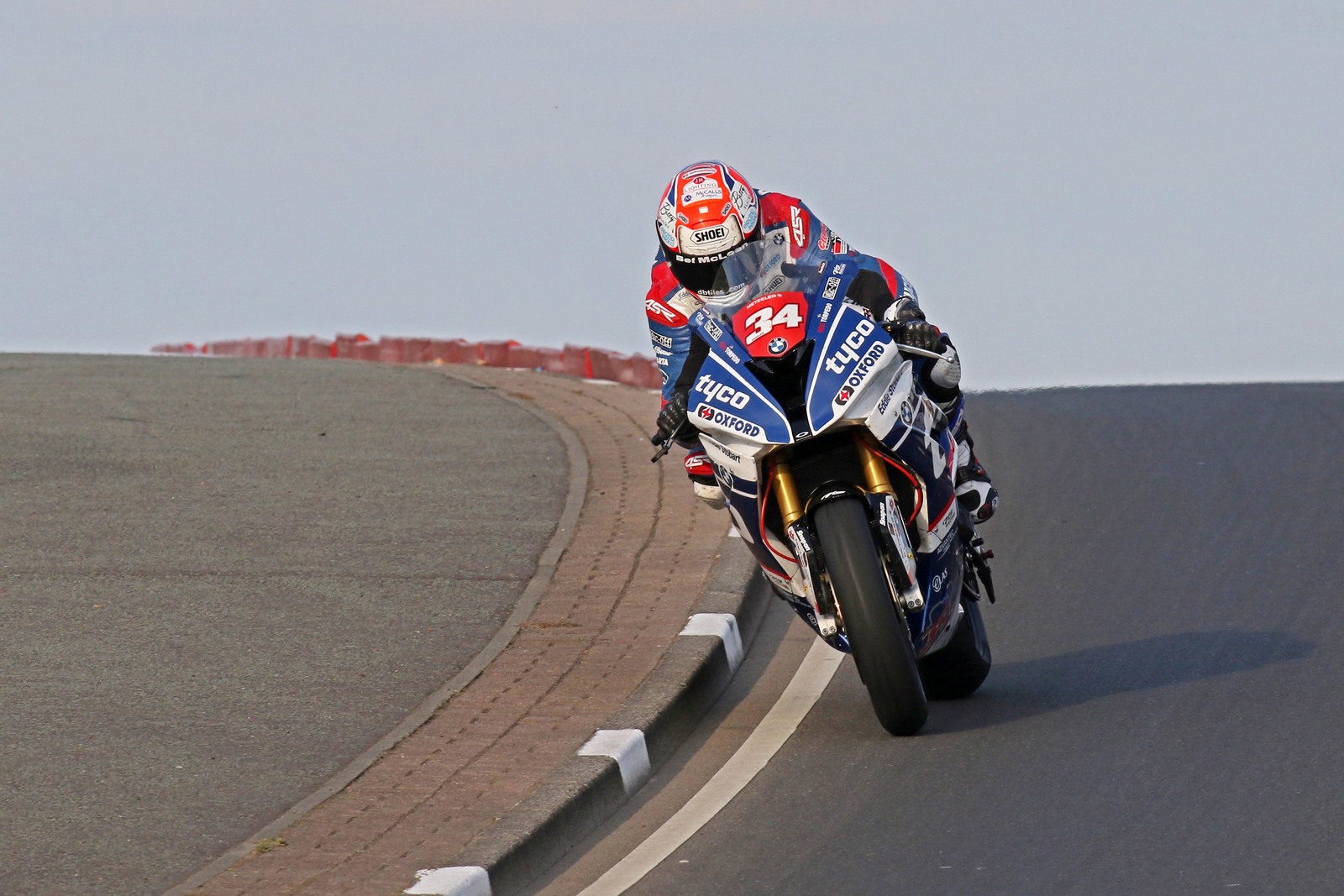 The 45 year old Morecambe rider, who is a six times winner at the event, has been taken to the Royal Victoria Hospital, Belfast by ambulance with a suspected broken leg.

Alastair Seeley continued his record breaking ways at the 2017 Vauxhall International North West 200 as he smashed the Superstock lap record to claim his 18th victory on the famous Triangle circuit on his Tyco BMW.

The ‘Wee Wizard’ set a new mark of 122.898mph to win from Lee Johnston (East Coast Construction) and Dean Harrison (Silicone Engineering Kawasaki). Seeley has now won a race at the North West every year since his first victory in 2008. His Superstock race victory was the 25th win for TAS Racing team bosses Hector and Philip Neill but it wasn’t without its drama.

“I hit a false neutral on lap two at the roundabout after I got into the lead and had to run up over the grass and on to a footpath.” the 35 year old said.

“I had to work my way back to the front and I thought I’d better not do anything silly on the last lap. Hopefully we can continue this form on Saturday for the massive crowds who are around the circuit.”

“This is what racing is all about and it is fitting that Alastair is the man who is bringing it to us.”

It was also a major consolation for the Carrickfergus rider after his retirement on lap two of the Supersport race with an engine problem earlier in the evening. Seeley had been fastest in practice but Martin Jessopp took advantage of the local man’s absence to win his first North West race on the Riders Motorcycles Triumph.

“I am lost for words.” the Yeovil man said.

“I have been trying to win a race here for ten years and now I have done it.”

“I tried to ride my own race and open a gap on the rest of the field.” he explained.

Jessopp won by 0.772 seconds from Ian Hutchinson on the McAMS Yamaha with James Hillier third on the JG Speedfit Kawasaki a further 1,2 seconds back.

It was the Triumph’s first win at the North West since 1970.

Jessopp didn’t have to wait long for his second North West win, taking victory in the final race of the evening, the Supertwins event on his Riders Motorcycles ER6 Kawasaki.

“I had pushed hard all race and was taking it a little bit easier on the last lap when I saw I had a six second lead on my board.” Jessop explained.

“But I looked back at the roundabout and saw Rutter behind me so I had to get my head down again.”

Rutter’s Kawasaki was built by Ryan Farquhar, who had been seriously injured in the same race twelve months ago, and it took a new lap record from Jessopp on the final circuit of 110.423mph to win by 0.8 seconds from Rutter with Ivan Lintin (Dafabet Devitt Kawasaki) third.

More, from a press release issued by Tyco BMW:

Alastair Seeley and Tyco BMW made it a record-breaking night at the International North West 200, with the diminutive Ulsterman taking a 12-second Superstock race one victory on the north coast aboard his BMW Motorrad S1000RR. His team-mate Ian Hutchinson took fourth place.

It stretched Seeley’s record at the NW200 to 18 wins and counting, and Tyco BMW’s parent company, TAS Racing’s, to 25 career wins at the Northern Ireland based event. Seeley also set a new lap record for the class with a staggering effort of 122.898mph, which was just 0.6-seconds outside the Superbike lap record, which gives an indication of his blistering pace on the Tyco BMW.

Speaking afterwards Seeley, who started from pole position said: “After qualifying, I knew if we could get some clear track, the lap record was on, as the Tyco BMW Superstock bike is perfect for the job. Obviously the win was the most important part of the job and after a little excursion at the Magic Roundabout early in the race, we picked up the pace to grab the win and that lap record. I just watched the gap on my pitboard climb and then made sure we didn’t make any mistakes on the last lap.”

Hutchy said: “We’ve put a lot of effort into dialling in delicate little set-up changes to suit my Tyco BMWs for the NW200, which are a little bit different for the roads. The overshoot ruined my chances of a podium tonight, but we are moving in the right direction and I’ll be looking to correct that on Saturday.”

Team Manager Philip Neill explained: “”It’s no secret how much I love the NW200 and to record the 25th victory for TAS Racing on the north coast in beautiful sunshine is just superb. I am really pleased to have reached this milestone together with Tyco and BMW, and it is fitting indeed that Alastair is the man to delivery this special victory on the BMW S1000RR.

Hutchy was also capable of delivering a podium position today but unfortunately didn’t have a chance after losing almost eight seconds when overshooting the chicane.

Thanks as always to our partners Tyco Security Products and BMW Motorrad and a very special thanks to each and every member of TAS Racing for all the hard work required to achieve what we did today.”

More, from a press release issued by Bennetts Suzuki:

Michael Dunlop will start Saturday’s two Superbike races at the North West 200 from the second row of the grid, the Northern Irishman qualifying in fourth place onboard his Bennetts Suzuki GSX-R1000.

With the new Suzuki making its road racing debut the team was always going to be busy trying to find a good base setting. With limited track time, the focus was mostly on testing various suspension settings to allow the new GSX-R1000 to cope with the imperfections of the roads around the Triangle circuit. Despite having plenty to test, confidence is high ahead of Saturday’s races.

Michael Dunlop, “This is the first time we’ve had the new Suzuki flat out, so we’re still learning the bike. We’re the only ones here with a completely brand new motorcycle, so we’ve been working on our setup, our gearing, on improving the chassis. Steve and the boys have been working hard, I’m feeling good. We’ve set a good lap time in qualifying without pushing to the limit, so we’ll see how we go in the races.”

Steve Hicken, team manager, “We’ve done a lot of work and it’s going well. We’ve only had about 40 minutes of Superbike practice and we’ve been doing all we can in that time to keep improving the bike. It’s the first time its ever raced on the roads so we’re learning every lap. Michael’s riding well and we’re quite happy with our position. We’ve got a package Michael can do well with, we know we’ve got a good bike, we’re just trying to find the sweet spot. We’re making more changes for the first race, but with no more practice laps we’re going in blind. But we should be able to do a job, and I expect us to go even better in race two.”

PETRUX TO RIDE THE GSX-RR IN BURIRAM AS MIR...
Read more
Feature