World Superbike Not Included According To PR Announcing MotoAmerica Will Anchor Monterey Motorcycle Festival at WeatherTech Raceway Laguna Seca July 12-14, 2019, But Will Return In 2020

World Superbike Not Included According To PR Announcing MotoAmerica Will Anchor Monterey Motorcycle Festival at WeatherTech Raceway Laguna Seca July 12-14, 2019, But Will Return In 2020 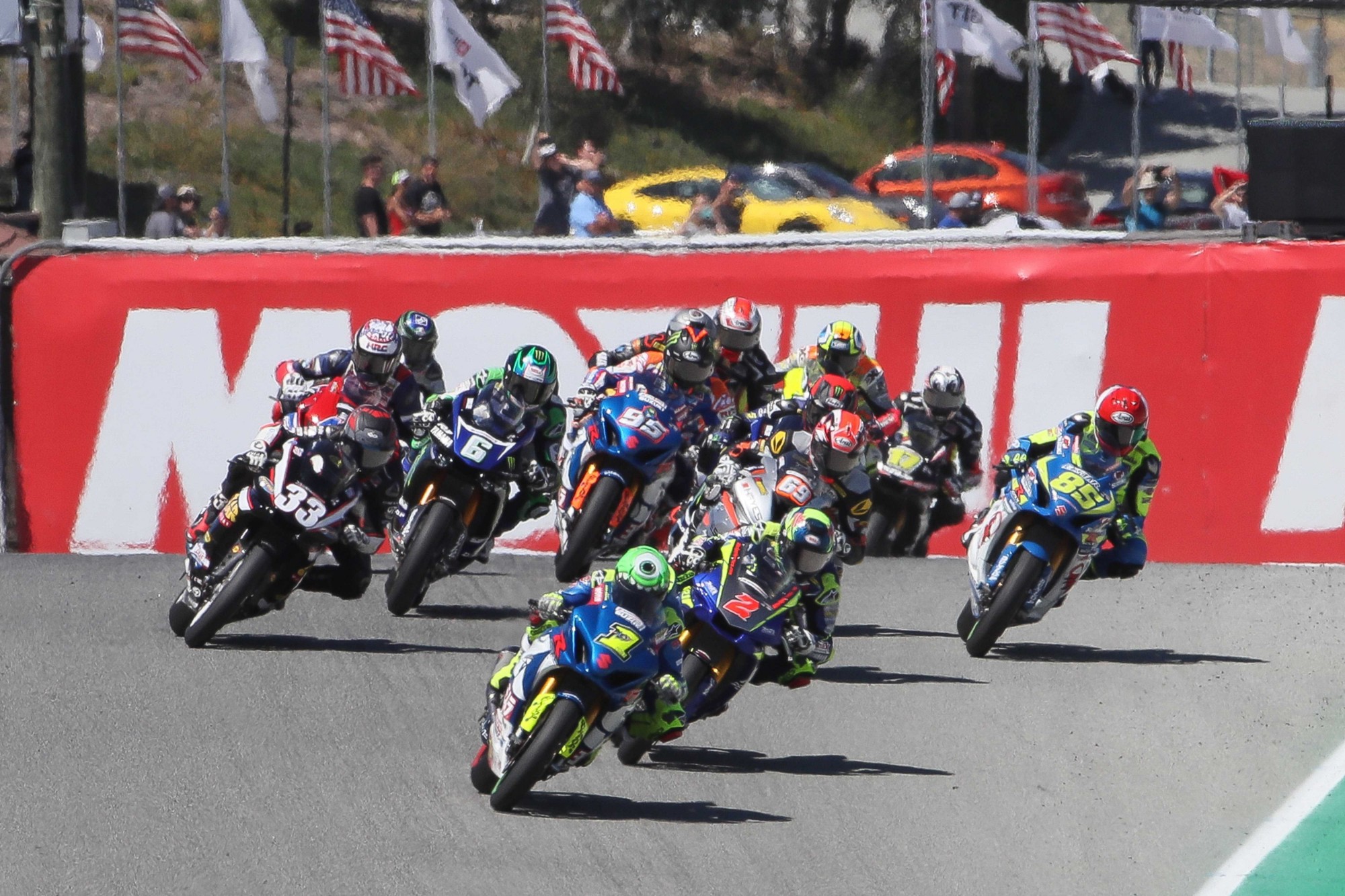 MONTEREY, Calif., November 5, 2018 – A landmark 2019 season is in store at Monterey County’s WeatherTech Raceway Laguna Seca. The legendary 2.238-mile, 11-turn road course is set to host a calendar of new and returning events that will thrill motorsports fans from across the globe.

The major event schedule will begin in March for the first time since 2006. The Intercontinental GT Challenge California 8 Hours returns for the third consecutive season to kick-off the year on March 29-31. Previously hosted in October, the event will be the second of the GT3 endurance racing series’ five races on five different continents.

The month of May springs into racing action May 3-5 with addition of the Trans Am Speed Festival taking hold of WeatherTech Raceway Laguna Seca. Contemporary car racing will take center stage by showcasing the motoring muscle of the popular Trans Am Series presented by Pirelli, which is filled with Camaros, Challengers, Mustangs and more. The Trans Am Series was formed in 1966 as a manufacturers championship for modern sedans and returns to WeatherTech Raceway Laguna Seca after a 15-year absence.

The Trans Am Series was held in Monterey in 1969-1972, 1978-1982, 2000-2001 and 2004. Event winners during that span include greats such as Mark Donohue, Parnelli Jones, Peter Gregg, John Morton, Elliott Forbes-Robinson and George Follmer. Complementing the weekend professional Trans Am race will be vintage and historic racers of Sportscar Vintage Racing Association (SVRA).

One week later, Ferrari Challenge North America’s Ferrari Racing Days and exclusive Corse Clienti Formula 1 cars descend on Monterey May 9-12. The single-marque series sparks the enthusiasm of Prancing Horse fans and owners alike. Competition among Ferrari 488s in 2018 ranged from professional drivers to notable amateurs such as Hollywood actor Michael Fassbender. The Corse Clienti Formula 1 program enables a small group of people to purchase F1 cars and use them to the fullest with tutelage from Scuderia Corsa drivers.

Motorcycle fans will be greeted to a full sensory experience July 12-14 when the MotoAmerica racing series blasts into town for three days of world-class motorcycle racing for the Monterey Motorcycle Festival featuring MotoAmerica. There will be racing legends, celebrities, vintage racing and heritage GP racing motorcycle exhibitions, classic motorcycle auction and engaging family events among the planned activities. Returning for its fifth consecutive year at WeatherTech Raceway Laguna Seca, MotoAmerica carries on the AMA Superbike tradition while fielding its full slate of five highly-competitive classes. MotoAmerica takes the sole spotlight, as the MOTUL FIM Superbike World Championship series will not be racing in North America in 2019, but is anticipated to return to WeatherTech Raceway Laguna Seca in 2020.

The prestigious Rolex Monterey Motorsports Reunion, a cornerstone of Monterey Classic Car Week, returns on its traditional date on the third week of August. The Monterey Pre-Reunion kicks things off with more than 300 historic race cars taking to the race track on August 10 and 11. The Rolex Monterey Motorsports Reunion on August 15-18 will feature 550 cars selected for their history and race provenance. The 50th anniversary of the International Motor Sports Association (IMSA) will be celebrated as featured marque throughout the four-day event with legendary cars and drivers from the series’ illustrious past, present and future.

In September, “Monterey Speed Week” will bring America’s premier sports car racing series and America’s premier open-wheel racing series to WeatherTech Raceway Laguna Seca in back-to-back weekends with special events taking place in between. First up will be the IMSA WeatherTech SportsCar Championship returning for its penultimate race of the season on September 13-15. The technologically-advanced prototype and GT cars will do battle with championships on the line in an always thrilling race. The new, seven-race WeatherTech Sprint Cup series will hold its deciding race of the 2019 season in Monterey.

Indy cars return to Monterey for the first time in 15 years with the INDYCAR Grand Prix of Monterey on September 20-22 for what will be the crown jewel event in the 2019 race schedule. The champion will be crowned during the season ending event that brings INDYCAR back to its spiritual road racing home. Memories such as Alex Zanardi passing Bryan Herta during the last lap on the Corkscrew in 1996, Mario Andretti’s emotional retirement in 1994 and Bobby Rahal’s remarkable four consecutive wins will be rekindled while five-time champion Scott Dixon and a grid full of talented drivers bring incredible racing to WeatherTech Raceway Laguna Seca.

Tickets for the INDYCAR Monterey Grand Prix are currently on sale at www.WeatherTechRaceway.com or by calling 831-242-8200. The on sale dates for all other events will be announced in the coming weeks.