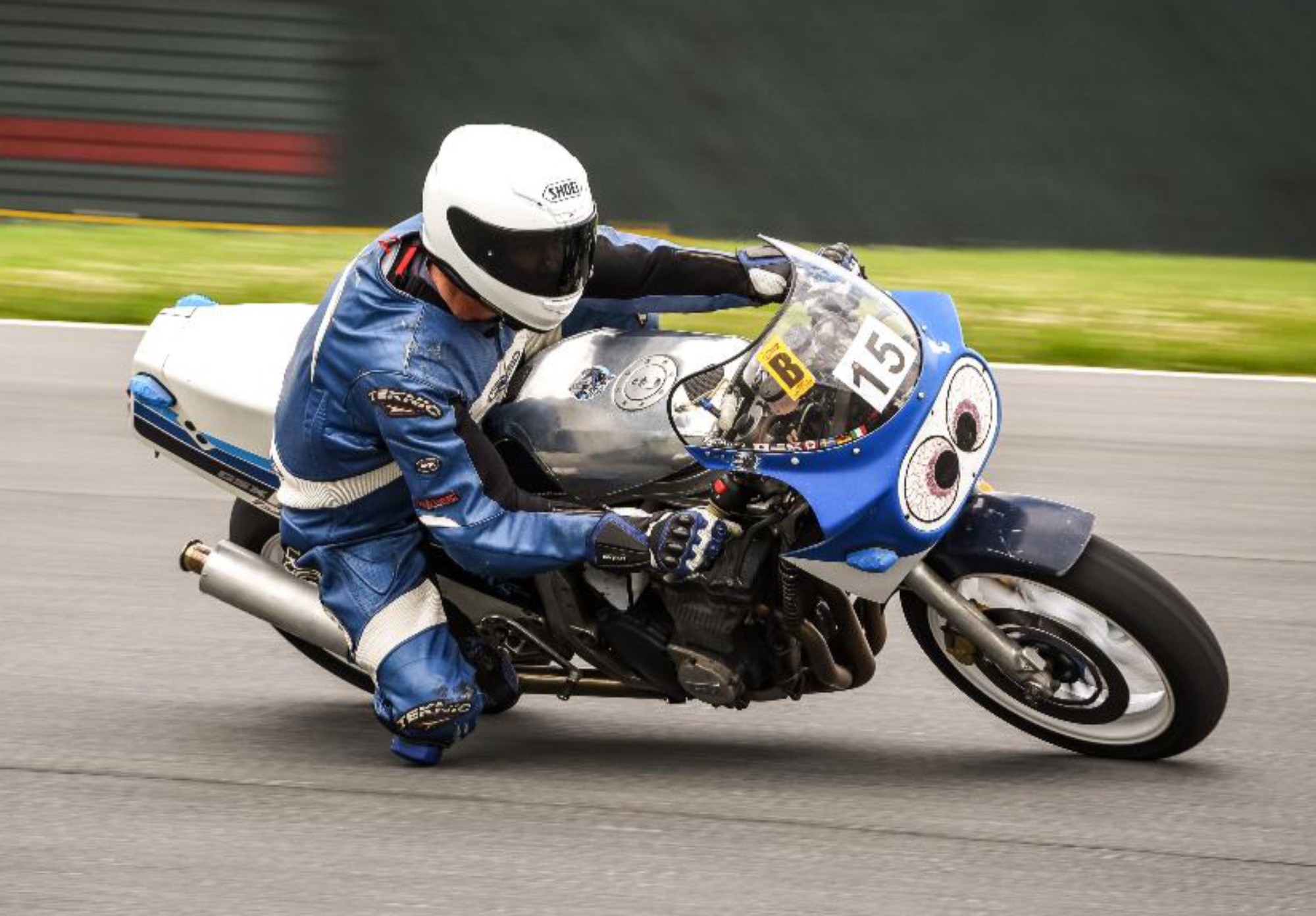 Round two of the New England Sport Bike Club (NESBC) had a rainy forecast, but mother nature held off and gave the riders who chose to brave the elements a perfect day. The event opened up with the Motard by First Trax race. Annual front runner Adam Clark grabbed the holeshot, but reigning #1 plate holder Bill Morey was in a hurry to get to the front and made a big move between turn 1 and turn 2 to grab the lead. Young gun Eli Block didn’t get the start he wanted, and worked hard to get himself up with the lead duo. By lap 2 he was probing Clark and waiting for a mistake, but Clark had his Honda on rails. At the halfway point Block finally made his move, using his momentum around the uphill and blind turn 11 go get a run on Clark down the front straight and complete the pass into turn one. The duo tried to close the gap up front, but Morey reeled off a steady batch of laps in the low 1:03’s that gave him a well-deserved win.

In the combined Arai Intermediate A and Bazzaz Intermediate B races, usual motard pilot Miles Allen grabbed the holeshot on his new Ducati 1100 and had clear sailing for the first few laps. Behind him, the BMW 1000 of Mauricio Osono and Yamaha R6 of Christian Trudeau were having a battle royale and began to close on the unsuspecting Allen as the race approached the halfway point. Osono used the power of his mighty 1000 to take the lead and never looked back, while Trudeau made several attempts to find a clear way by until finally succeeding with three laps to go. Behind the big bike battle, the young guns in the smaller displacement Bazzaz Intermediate B class were fighting it out! Leading the way from start to finish was 16-year-old Asher Rubright, who has established himself as the clear rider to beat this year. Behind Rubright, 13-year-old Brianna McHugh was having a fantastic race on her Kawasaki 300 with the KTM’s of Fletcher Rood and Thomas Sands. The youngest racer of the weekend impressed the crowd as she used her speed through the blind and sweeping turn three to set up her moves to the front and securing her a second-place finish. Sands made a valiant attempt to catch the motard-mounted Rood, but was just short at the line.

The Hindle Street Bike One and Dunlop Street Bike Two races both had the largest fields and some of the best racing of the weekend! Hindle Street Bike One was a race from beginning to end, with Brian Wardius and early race leader Eric Martin never separated by more than a couple bike lengths. In the end, Brian “stalker” Wardius made his move on the last lap and hung on for a well-earned win. Behind the lead duo, the beautifully prepared 1980’s GSXR of Tab Burgess rode an impressive race to finish third place and earned the award for the NESBC Rider of the Weekend in the process. The Dunlop Street Bike Two class showcased the talents of third place Doug Hanks, second place Roger Buzzell and winner Nathan Muscaro. The experienced motard riders rode flawlessly all race long. Hanks kept the remainder of the large field at bay on his 20-year-old Kawasaki EX500, which had him smiling from ear to ear all day long.

The final event of the weekend was the Formula Ultralight class by Kawasaki, which had a light turnout due to the forecasted rain that never came. Due to a weight infraction (he’s simply too darn light) Ben Gloddy was given a 4th row starting position, but the rising Moto America star put on a show as he charged to the front and reeled of a string of 1:05 lap times on his Ninja 400. “The King” Rick Doucette, who is the current #1 plate holder at the Loudon Road Race Series, rode a solid race and kept Gloddy in sight on his Yamaha R3 and pulled clear of third place Tyler Wasserbauer who was riding his brand new (and nearly 100% stock) Ninja 400 for the first time.

The final event of the NESBC 2019 season will be at New Hampshire Motor Speedway on September 16th and will feature both double points in all classes including the Brattleboro Auto Mall Team Challenge and will also feature a Winner-Take-All Northeast Dealer Challenge where dealerships will compete for the title of “Fastest Dealer in the Northeast”. It should be a blast!