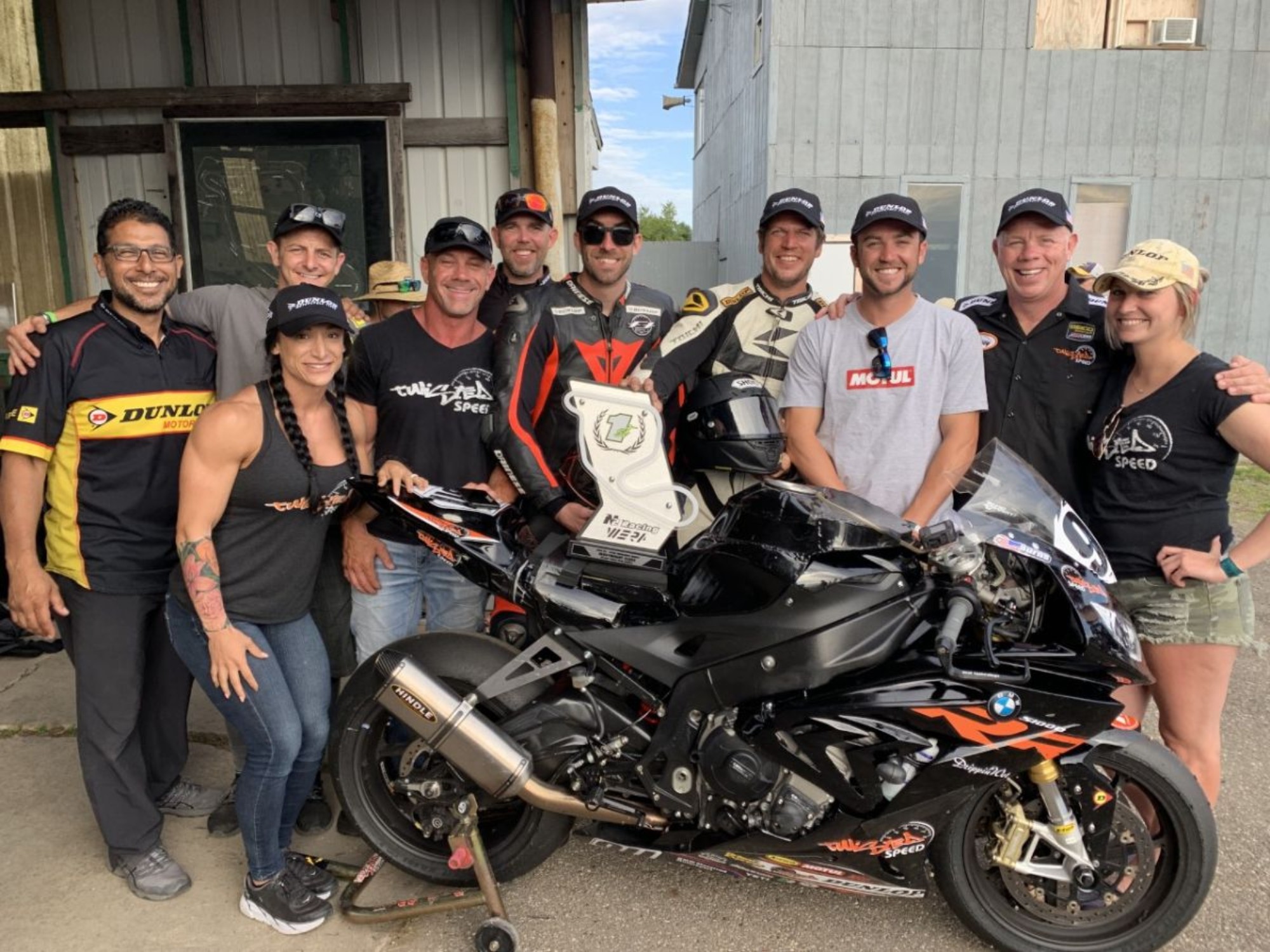 MotoAmerica veteran and BMW rider Travis Wyman has been busy over the last week promoting BMW motorcycles in his hometown and helping pilot a BMW S 1000 RR to a commanding victory in a N2/WERA Motorcycle Roadracing Inc. endurance race.

Wyman used both events to spread the word about how racing BMW motorcycles has rejuvenated his pro racing career and had the team’s BMW S 1000 RR on display.

On Friday, Wyman traveled more than 250 miles to Nelson Ledges Race Course in Garrettsville, Ohio, for Saturday’s N2/WERA Motorcycle Roadracing Inc. four-hour endurance race. Wyman teamed up with pro road racing veteran and Dunlop test rider Taylor Knapp and pro racer Brad Burns for the race aboard the Twisted Speed Racing team’s BMW S 1000 RR. The team was led by crew chief Tony Romo of Dunlop Motorcycle Tires and put in a stellar performance in the Heavyweight Class, leading every lap and winning by a margin of three laps. Wyman played a big role in the victory, piloting the Aaron Borello-owned BMW for a 48-lap stint that saw its race lead increase by two laps.

“It was a great weekend promoting the BMW brand,” Wyman said. “Many thanks to Harv’s Harley-Davidson and MotoClectic for allowing me to participate in their events and show off the impressive BMW S 1000 RR I race in MotoAmerica. I had a blast sharing our team’s story and accomplishments with riders of all brands and backgrounds in western and central New York State. There were a bunch of BMW riders at each event, and it was great showing them that BMW isn’t just a touring brand: it’s an all-around high-performance brand. I think we won MotoAmerica some new fans, and it was great meeting Gary from Motul at Leaf & Bean. Motul makes top-notch lubricants that have helped keep the Weir Everywhere Racing BMW S 1000 RR running strong this season.

“I also had a great time racing with Taylor, Brad and everyone at the Twisted Speed Racing team at Nelson Ledges,” Wyman continued. “It felt great to be back on top of the box. I have to thank Aaron Borello, Dustin Cyr, Scott Rosey Darrell Prantera, Darrian, Allison and the rest of the team for their hard work on Saturday, and a big thank you to Tony Romo for volunteering to be our crew chief. The team’s Dunlop tires were a big reason we performed so well. We completed the more-than 200 lap race on one medium-compound front tire and only changed our medium-plus compound rear tire once. There were several other pro riders competing in the Heavyweight Class, but our BMW’s power and handling gave us a big advantage over the rest of the field.”

Wyman will be aiming to carry the past week’s positive momentum into this weekend’s MotoAmerica event at New Jersey Motorsports Park.