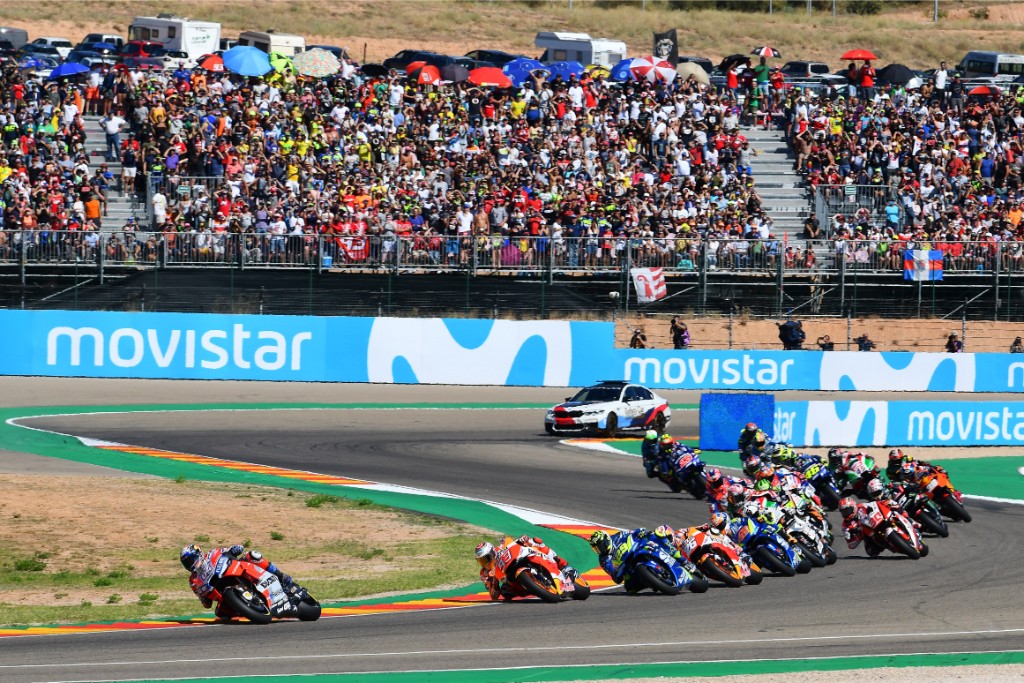 Engines ON for Aragon!

MotorLand Aragon awaits, with Marquez in the driving seat – and the crosshairs

After the raucous seaside of the Riviera di Rimini, it’s now time to head for the unique backdrop of MotorLand Aragon. The technically challenging track is an oasis of speed nestled in the stunning scenery of the area, an outpost of racing excellence in a region where competition has serious history – and more of it is made year on year. This season, Marc Marquez (Repsol Honda Team) arrives with an aptly numbered 93-point lead, but the last three races have more than shown that the reigning Champion doesn’t always get his own way…so how will it play out on home turf?

Maquez’ speed at the circuit is something to seriously respect. The number 93 has won four times in the premier class at MotorLand, including the last three in a row, and has four pole positions to undoubtedly make him the man to beat at the track. Can he do it again this season to extend his lead even further? If he can, there’s a chance he’ll tee himself up with a chance to win the title in Thailand…

It’s never an easy ask though – even when the track has a corner named after you. Maverick Viñales (Monster Energy Yamaha MotoGP) seems a good bet as someone who will be aiming to derail Marquez’ assault on Aragon, and coming from two podiums in a row he’s on good form. He’s never won at MotorLand in the premier class, but there’s no time like the present to start creating some momentum. His teammate Valentino Rossi (Monster Energy Yamaha MotoGP) will also be aiming for the podium, and plenty of eyes will once again be on Fabio Quartararo (Petronas Yamaha SRT).

The rookie had a stunning race in Misano, taking the reigning Champion to the wire and putting up a fight on the last lap. In the end it was another podium and not a maiden win, but it’s the closest the fast Frenchman has come to the top step so far – and in some serious style. Can he do it again this weekend? If he does it, Rookie of the Year will start to look less like a probability and more like a formality.

Alex Rins (Team Suzuki Ecstar), meanwhile, is looking for a comeback. The number 42 hails from mere kilometers away from MotorLand to make it a true home venue for the Suzuki rider. After defeating Marquez with his stunning move at Silverstone, Rins faltered at Misano and crashed out – so motivation will be higher than ever. He also slipped to fourth in the standings with the mistake on the Riviera di Rimini, so Aragon is a chance to get back into that top three and stake his claim on another podium at least.

The man who moved above Rins at Misano was Danilo Petrucci (Ducati Team) who, despite a tougher few rounds of late, has kept raking in the points to put himself back behind teammate Andrea Dovizioso in the standings. Misano was also tougher weekend than many expected for the Borgo Panigale factory though, so can they bounce back at MotorLand? Traditionally a tougher track for Ducati than some, a good few eyes will be on the two Italians in red and Dovizioso will be aiming to repeat his impressive performance from last year.

In the fight for top Independent Team rider, it’s also close, although Quartararo’s Misano masterpiece put him back above Jack Miller (Pramac Racing), and gave him some breathing space ahead of Cal Crutchlow (LCR Honda Castrol) for now. Is another twist coming in Round 14? Crutchlow certainly will want to score big and bounce back from a crash on the Riviera di Rimini and Miller made good progress forward on Sunday in San Marino.

Making life increasingly difficult for the riders who started the season bothering the top five, top eight and top ten is Pol Espargaro (Red Bull KTM Factory Racing), however. A stunning performance from the Spaniard in qualifying at Misano gave KTM their second front row of the season, and the number 44 brought it home in seventh at the flag, battling the likes of Rins and the Ducatis. Espargaro has impressed more than a few times this season, and home turf at Aragon will see him pushing to do the same. And there’s news on the other side of the KTM garage: after announcing in the summer that Johann Zarco would be parting ways with the Austrian factory for 2020, the switch has come early and it’s test rider Mika Kallio who takes over for the remaining races of this season. How will Kallio fare in a full-time seat? And can KTM profit even more from the Finn’s feedback as they continue their huge development push?

At Aprilia, meanwhile, it’s also home turf for Aleix Espargaro (Aprilia Racing Team Gresini) and he’s been on the podium at the track before – his only rostrum in the premier class. Teammate Andrea Iannone was forced to sit Misano out after hurting his shoulder and could find it tougher going, although Noale factory test rider Bradley Smith will be out on track too, with the goal for all good points.

Misano is unique and MotorLand the same – in a completely different way. Can Marquez extend his lead in the final race before the flyaways? Or will the likes of Viñales, Quartararo and Rins fight back? The outpost of speed fires up for MotoGP™ on Friday 20th September, with the premier class race at the slightly earlier time of 13:00 (GMT +2) on Sunday 22nd.

Marquez vs Fernandez: is this the duel for the crown?

An investigation, a last-lap move on the limit and back-to-back wins put the rider from Madrid on a roll

After another stunner at Misano, Alex Marquez (EG 0,0 Marc VDS) remains in charge of the Moto2™ standings, but Augusto Fernandez (Flexbox HP 40) is starting to make his presence more than felt. Two wins on the bounce and a crash for Marquez on the day of the first puts Fernandez only 26 points in arrears, and next up is MotorLand – a track both know well, and a track where both race on home turf.

As has been true throughout an incredibly interesting season in the intermediate class so far, however, things can turn on a dime. The only constant since earlier in the year has often been Marquez and his pace, with Silverstone the only self-inflicted hiccup, but Fernandez took the gloves off at Misano, Tom Lüthi (Dynavolt Intact GP) was back in the battle and Speed Up put on a serious show of pace. This time it wasn’t Jorge Navarro (HDR Heidrun Speed Up) but teammate Fabio Di Giannantonio who took Fernandez to the wire, but competitors need to keep an eye on both the Spanish veteran and Italian rookie after an impressive season so far.

Meanwhile, there are the men with the track records. Sam Lowes (Federal Oil Gresini Moto2) was back in the top five and on form at Misano, and he’s won before at Aragon. And so has Brad Binder (Red Bull KTM Ajo), who took victory last year and is slowly making his way up the standings after a tougher start to the year. He’s won one race in 2019 already, could MotorLand see him fight for another?

The track is a challenging and technical way to end the European leg of the season ahead of the flyaways, and it will be another fascinating Moto2™ race. One thing is sure: Alex Marquez will leave for Buriram in the lead, but it could be by a single point or by 51, and MotorLand will decide. So make sure to tune in for the Gran Premio Michelin® de Aragon from the 20th to 22nd September, with the intermediate class racing on Sunday at the slightly later time of 14:30 (GMT +2).

Is Dalla Porta now in the driving seat?

Despite a penalty dropping him slightly down the order at Misano, the Italian now has a comfortable margin at the top…

At Misano, all eyes were on Lorenzo Dalla Porta (Leopard Racing) as the Championship leader arrived with a healthy lead to the track where he took his first Grand Prix win, but early in the race focus shifted quickly as Aron Canet (Sterilgarda Max Racing Team) suffered a mechanical problem. Would Dalla Porta be able to capitalise? In part, although track limits caught him out and left him far off the podium. And so, as we arrive to what’s now Canet’s home turf, Dalla Porta has a lead of 22 points and it would be a long shot to see him lose that at MotorLand. Canet would have to win and Dalla Porta would have to score a 0.

It’s far from a two-horse race, however. Tatsuki Suzuki’s (SIC58 Squadra Corse) stunning and emotional victory means 2019 is the first time there have been ten different winners in a single season in the lightweight class, with competition so fierce it’s making history. And there are two names at the top but Tony Arbolino (VNE Snipers) isn’t far behind Canet, Marcos Ramirez (Leopard Racing) is just within touching distance…then the likes of John McPhee (Petronas Sprinta Racing) lurk just behind with some serious proven pace.

Meanwhile Jaume Masia (WWR) is on home turf at Aragon, Albert Arenas (Sama Qatar Angel Nieto Team) had some pace in Italy and Gabriel Rodrigo (Kömmerling Gresini Moto3) is another fast man now back from injury. There’s a reason Moto3™ races are often a freight train: the field is fast and deep.

The only man in the class who has conquered MotorLand before, Romano Fenati (VNE Snipers), broke his scaphoid at Misano – so a new name will be on the top step. Will it be one who has already won a race this year or another record-breaking different winner? Watch the Gran Premio Michelin® de Aragon from the 20th to 22nd September.