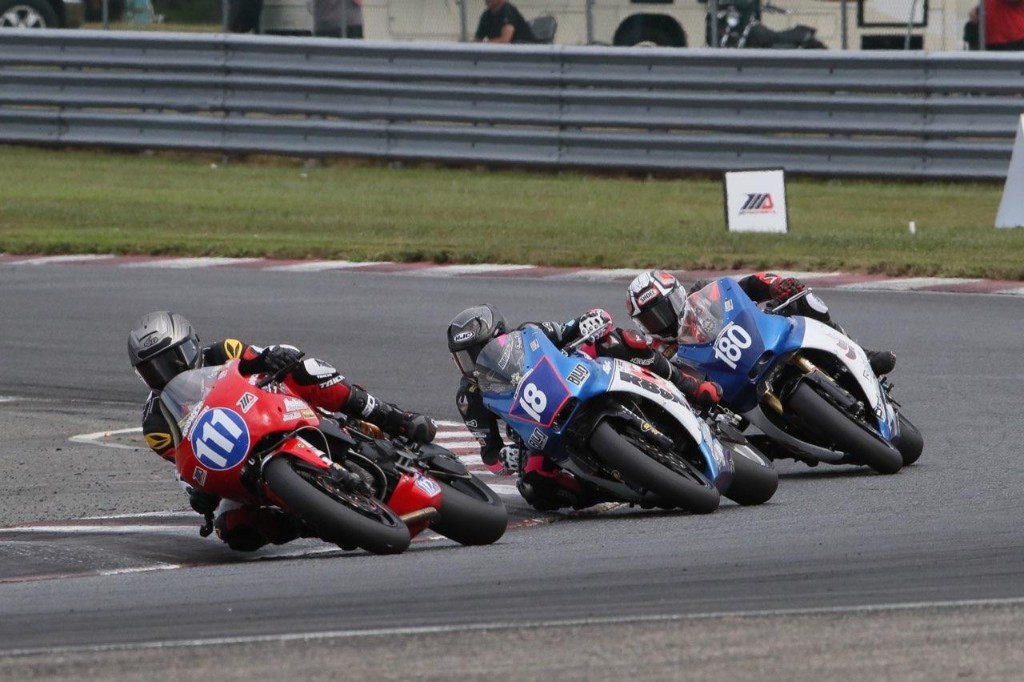 As the 2019 MotoAmerica season comes to a close this weekend at Barber Motorsports Park, a maximum-capacity grid of 36 Twins Cup competitors is expected and RBoM Racing looks forward to filling about 20% of the field.

Headlining the RBoM assault will be new recruit #18 Jackson Blackmon and veteran front-runner #180 Curtis Murray. Both Blackmon and Murray are riding the wave of momentum after they both finished on the podium at New Jersey Motorsports Park, with 2nd and 3rd place finishes, respectively. Blackmon turned the fastest lap of the race, setting an unofficial SV650 lap record in the process, crossing the finish line just 0.3 seconds behind the eventual winner. Murray has been working tirelessly with Robem Engineering to develop his 2018 Suzuki SV650 into the package he needs to win and, with podium finishes at Road Atlanta, VIR, and now New Jersey, the finale at Barber should be Murray’s chance to shine.

#440 Gillis Glidewell, #615 Austin Miller, and #119 Tyler Freeman will also be making their return to the Twins Cup grid flying RBoM colors. Tennessee-native Glidewell considers Barber to be his “home track” and will have plenty of friends and family in attendance to cheer him on. 16-year-old Austin Miller, from North Carolina, has never raced at Barber, but the ex-motocross standout should be up to speed quickly. Dawsonville, GA-racer Tyler Freeman has years of racing experience at Barber with WERA and looks forward to showing his true potential this weekend. The pace is expected to be faster than ever on the freshly repaved Barber racetrack as 44 entrants attempt to qualify for the 36 available starting spots.

RBoM Racing ambassador #621 Chris Bays is questionable at the moment due to lingering injuries sustained in a crash that happened during qualifying for the Sonoma round of the Twins Cup series. Bays competed in both subsequent rounds at PittRace and NJMP but could not race to his full potential. Bays’ status is “day by day”, at the moment.

More, from another press release issued by RBoM Racing:

Arizona Speed Engineering’s Pete Murray has spent 5 years racing a variety of machinery for VRS Racing on the mountain course of the Isle of Mann, including the Manx GP, and will bring his international experience to Barber Motorsport Park to test his skills against MotoAmerica’s top Twins Cup competitors. Pete has won Replica trophies, awarded to those finishing within 110% of the winners time, at each of the three Manx GP’s he has competed in. Pete Murray was one of only a handful of Americans to compete at the Isle of Mann in 2017 and 2018.

Pete Murray, no relation to RBoM Racing’s Curtis Murray, cut his teeth racing a Suzuki SV650 in west coast WERA regional races before pursuing his dream of racing in the historic Isle of Mann TT. Murray’s experience at the Isle of Mann has been primarily on Kawasaki machinery, but Murray should have no problem adapting quickly to his #183 RBoM Racing Suzuki SV650. Tracktime will be at a premium for Murray as he has a lot to learn having never seen Barber Motorsports Park before. Practice starts on Friday afternoon, qualifying takes place on Saturday and Sunday, and the final Twins Cup race of the 2019 season starts at 4:00pm on Sunday Sept. 22nd.