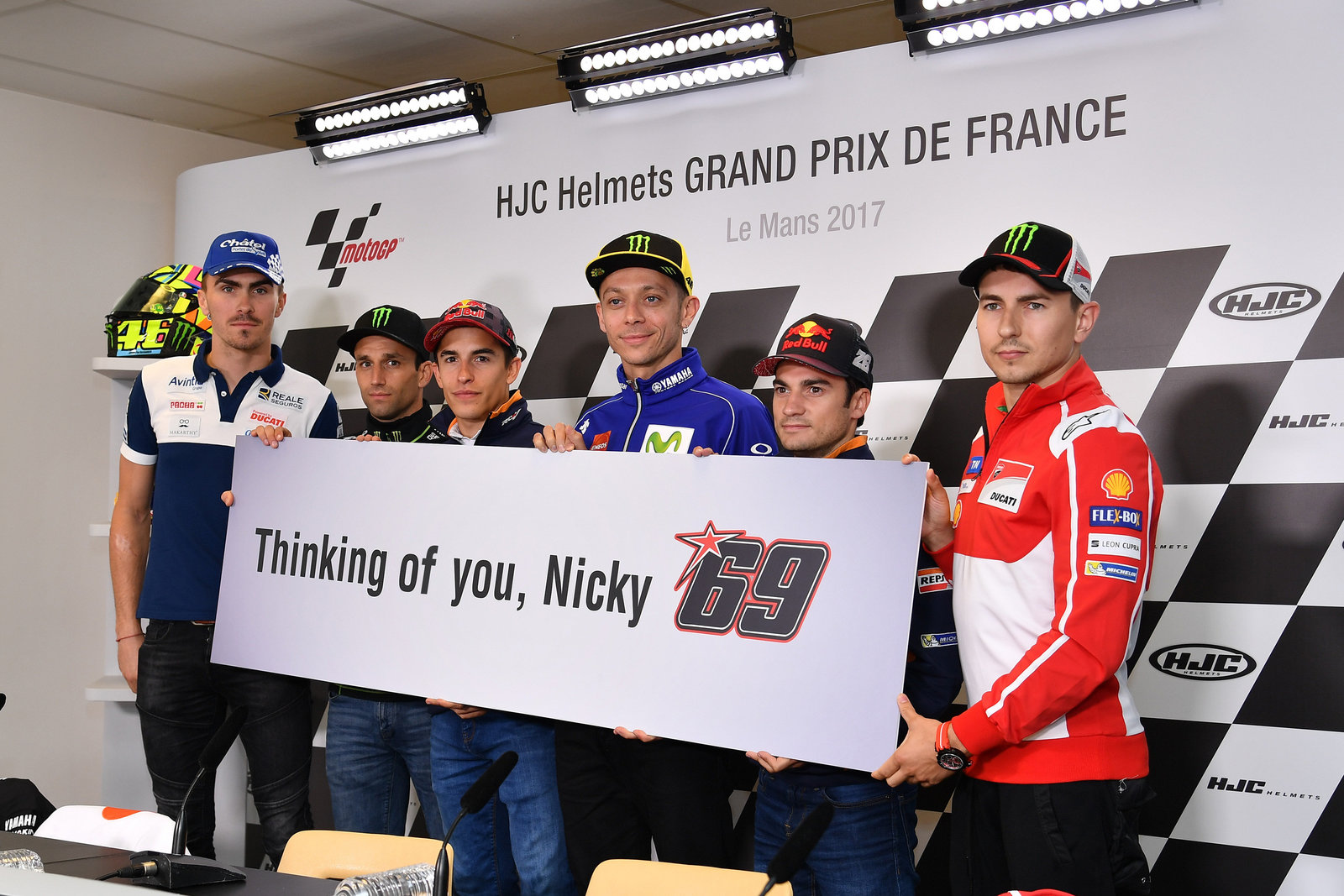 Pre-event Press Conference focuses on grip, the possibility of rain and new asphalt

Valentino Rossi: “It was very bad news from yesterday. The first hours it’s difficult for it to sink in, but I spoke with a doctor who is a friend of mine, and he said to me that the situation was very difficult from the first moment. Now with a bit more time you start to understand it and it’s a great shame because Nicky is a great friend and great rider; a World Champion and always at the top, but also a great guy. Coming from a family of racers, from his father to his brothers, he’s always a good guy and always smiling. I think the situation is very difficult but we all hope for the best.”

Regarding the weekend ahead, Rossi had good words about the new track surface, and has higher hopes after a tough Spanish GP: “In Jerez I was upset for me and the team, considering the result of the first three races and last year’s race in Jerez. We lost the advantage we had, but I’m still in front on points, which is positive. We need to understand it, it looks like the marriage between the M1, the tyres and the track was very bad. We don’t know what to expect from this weekend. Usually in the past the M1 was always good here in the last few years but we have to wait. We hope for a good feeling, but the weather could be bad and we expect some rain – so it will also be an important test in those conditions. We did one day of testing here before Jerez to understand the new track surface. The conditions weren’t great but I think they’ve done a very good job. The asphalt is great and a lot better on the bumps – almost no bumps. The tyres worked well I think it will be positive for everybody.”

Marquez also began his answer debriefing the race in Jerez, but unlike Rossi goes into the weekend in Le Mans without having tested at the track beforehand: “Jerez was a great surprise for the Honda team because normally we expect to struggle more there but even though it wasn’t one of my best weekends, I was able to fight for the win until the last laps. And I’m happy about the Monday test too because I did a lot of laps and tried many things. In Le Mans we’ll see, the track surface is another question mark – this year is different, we have a different bike so we’ll try to do our best. We have some data from Cal Crutchlow from when he tested here, so we’ll try and use that. I like the circuit, but although it’s a track I like, for some reason the results sometimes don’t arrive. We’ll see. A podium result here would be a good one.”

Jerez winner Dani Pedrosa goes into the French GP on a good roll, and is also positive after hearing other riders’ reports on the asphalt: “In the last two races we made some improvements and were getting better practice by practice. And in the last test we had a good day, and we need to test the new surface here but I think the riders that tested it said the grip was good. So it’s about learning how the feeling in the corners is, where the new bumps are or aren’t. But I think after the last test our base is quite good so we hope we’ll start the weekend with the bike we had in the last two races. We’ll check the track and the weather, we need track time to test the tyres but maybe tomorrow will be raining.”

Equal on the all-time podium list with Pedrosa – 146 apiece – is Jorge Lorenzo, who joined his compatriot in adding a rostrum finish to his tally in Jerez, and has the best record on the grid at Le Mans: “For me Le Mans has always been a good track, from 2003. So a magical track for me, and it can be a good track for Ducati as we’ve seen. Let’s see with new asphalt, how the grip is and the bumps. And the weather, it looks like it will rain but it changes every day. It’s been a long time because I got used to having good results so I wasn’t used to recovering positions and struggling. But I trust myself and my team and the potential of the bike. I need more kilometers. It’s not over yet, there’s work to do, but I feel much more natural with the bike now.”

Another rider seemingly feeling more and more at home on his machine is rookie superstar Johann Zarco – one of the tricolores lining up in the premier class in Le Mans this season: “It’s a special weekend, after a great debut and a good race in Jerez. All the fans are pushing me to get on the podium – and I want it too but I need time! We have new asphalt, in wet or dry if we have better grip that can help me to have good confidence, because the bike is good in many conditions at the moment. So if I have something more, why not stay with the top riders? I’m still learning, and when I analyse the last race I still have a lot to learn – so why not, because I think the potential of the bike is to be on the podium. The fan reaction is quite a surprise. It’s nice to see that being good in MotoGP, people love it and support you. So I want to enjoy it and stay motivated to keep pushing.”

Fellow home hero Loris Baz is another aiming to fly the flag, arriving at his home track with some good speed and points this season so far. Baz, like Zarco, praised the fans’ reaction – and is optimistic of a good result on the Bugatti circuit: “I remember coming here as a child and I remember my first race here two years ago, I think it’s something you remember forever. Racing is quite famous in France, a lot of people come here, so it’s very special and I love riding at home every time. This year is going much better than last year. It could be better but I think we’re doing a good job and working well with the bike we have. We can always score points, and in some other tracks the pace was really good – so let’s hope this track is good for us like Argentina was. The bike is really strong on the brakes and there’s a few places here like that.”

The premier class head out of pitlane for the first time on Friday at 9:55am (GMT +2) for FP1 at Le Mans, before the race headlines Sunday at 14:00.