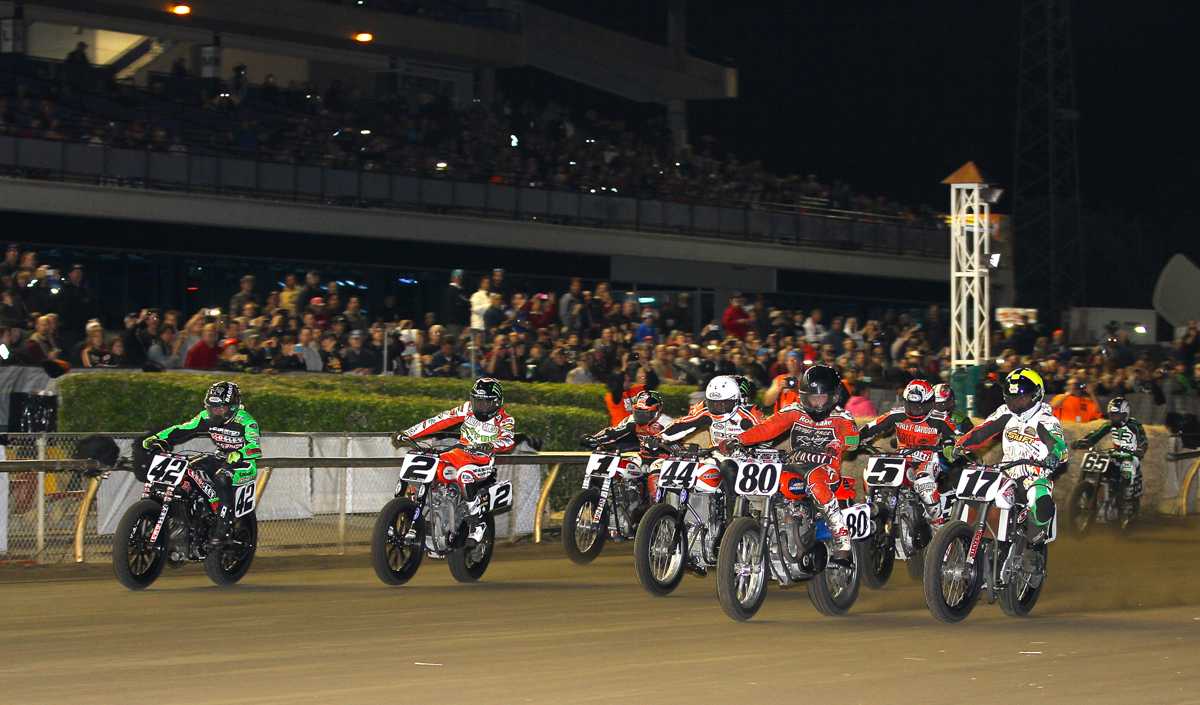 DAYTONA BEACH, Fla. (May 18, 2017) – American Flat Track is approaching Turn 2 on its dash around four Miles in four weeks as the series heads to the Harley-Davidson Sacramento Mile presented by Cycle Gear at the Cal Expo Fairgrounds in Sacramento, Calif., on May 20.

Located in one of flat track’s traditional hotbeds, the Sacto Mile is rich with Grand National Championship history and has been the site of many thrilling down-to-the-wire battles. The dominant force over the decades, Harley-Davidson has claimed an impressive 39 victories out of the 51 races held since the event joined the series calendar in 1959.

At the same time, Bryan Smith (No. 1 Indian Motorcycle Racing backed by Allstate Scout FTR750) returns to Sacramento justifiably confident and surrounded by something of an aura of invincibility. Yes, the reigning Grand National Champion recently took a share of the AFT Twins presented by Vance & Hines title lead, and yes, he’s riding a two-race win streak. But Smith’s recent sterling form barely hints at the full extent of his overwhelming status as race favorite this weekend where he’ll attempt to claim a seventh-consecutive Sacramento Mile victory.

Smith, who earned his first Sacramento Mile victory in 2011 on the legendary Harley-Davidson XR750, has proven his mettle with success on multiple manufacturers over the years. If the Michigan native is victorious this weekend, he’ll set a Sacramento Mile record by claiming victories at Cal Expo on three different makes: Harley-Davidson (2011), Kawasaki (2012-2016) and Indian Motorcycle.

Mees retained a piece of the ’17 AFT Twins championship lead by upping his season-long string of podium performances to four with a third-place run last weekend at the Arizona Mile. Perhaps even more encouraging than his actual placement was the fact that he pushed both Smith and Baker to the checkered flag in the Main Event, flashing the capacity to steal one of these upcoming Miles.

“We’re definitely going to Bryan’s hometown place,” Mees said. “That’s his race. I’m pretty excited to go to Sacramento. We’re dead even. I won the first two, he won the next two. It’s going to be fun.”

While some early misfortune cost him dearly in the points race, Baker makes it three factory Indian Motorcycle pilots inside the championship top five in fifth. Despite some inconsistent results in 2017, Baker remains a rare talent, and his two recent runner-up finishes suggest that he’s on the verge of claiming a victory of his own aboard the Scout FTR750. Baker narrowly missed grabbing that win last weekend in Phoenix and will be motivated to get some payback in Sacramento.

Slotting in between the Indian Wrecking Crew in the title fight are third-ranked Sammy Halbert (No. 69 Estenson Logistics Yamaha FZ-07) and fourth-ranked Jarod Vanderkooi (No. 20 Richie Morris Racing Kawasaki Ninja 650).

Halbert has not finished any lower than seventh yet this season while teenager Vanderkooi is knocking on the door of his first-career AFT Twins presented by Vance & Hines podium finish.

Shayna Texter (No. 52 Richie Morris Racing Honda CRF450R) storms into the Sacramento Mile with the AFT Singles championship lead on the strength of her first race victory in years. Texter doesn’t expect to wait so long to claim another win, and the Sacramento Mile should play directly into her strengths as a rider.

Kolby Carlile (No. 36 Parkinson Brothers Racing Honda CRF450R) continues to hold down the runner-up position following yet another steady ride. Brandon Price (No. 92 DPC Racing/Don’s Kawasaki KX450F) is on the rise in third with two podiums, including a win, in his last two outings.

In addition to the racing, the opening ceremonies for the Sacramento Mile will be action packed. Legend Kenny Roberts and Kenny Roberts Jr. will be on hand as the Grand Marshalls of the event. The pair are the only father-son duo to win premier Grand Prix World Championships and be inducted into the MotoGP Hall of Fame.

Also making a special appearance is a legendary machine – the infamous Yamaha TZ750. The legend of the TZ750 was spurred by Roberts Sr.’s epic win at the 1975 Indy Mile. Ray Abrams (A&A Racing), a longtime supporter of Roberts Sr. and instrumental in the TZ750 project, will be on hand with his famous motorcycle. Joe Kopp, the 2000 Grand National Champion, will mount the beast to show off the raw power of one of flat track racing’s most legendary builds. Following Kopp’s ride on the TZ, the action continues with the Joe Leonard Memorial Dash for Cash, honoring the sport’s first Grand National Champion who recently passed at the age of 84. Roberts Sr., a two-time Grand National Championship himself, will wave the green flag to start the race.

Another longstanding tradition – 7th Annual Alamo Alarm Night Before the Mile at the Lodi Cycle Bowl – will take place on Friday, May 19. For the first time ever, FansChoice.tv will live stream the event, with opening ceremonies kicking off four hours of coverage beginning at 6:00 p.m. PT (9:00 p.m. ET).

Tickets for the Sacramento Mile are now on sale and can be purchased at http://sactomile.com/tickets/.

Catch all the Action on NBCSN and FansChoice.tv

As part of American Flat Track’s television broadcast package with NBCSN, the cable network will air flag-to-flag coverage of both Main Events from the Sacramento in a one-hour telecast scheduled for early August. The complete television schedule for American Flat Track on NBCSN will be released in the coming weeks.

Live streaming coverage of every second of race action from the Harley-Davidson Sacramento Mile presented by Cycle Gear will be aired on FansChoice.tv at www.fanschoice.tv/watch-live/american-flat-track…. The stream will go begin at 2:00 p.m. PT (5:00 p.m. ET) and will also be simulcast on Facebook Live.

American Flat Track is the world’s premier dirt track motorcycle racing series and one of the longest-running championships in the history of motorsports. Sanctioned by AMA Pro Racing in Daytona Beach, Fla., the series is highly regarded as the most competitive form of dirt track motorcycle racing on the globe. For more information on American Flat Track, please visit http://www.americanflattrack.com, follow us on Twitter, like us on Facebook, live stream the events at FansChoice.tv and catch all the American Flat Track racing action on NBCSN.