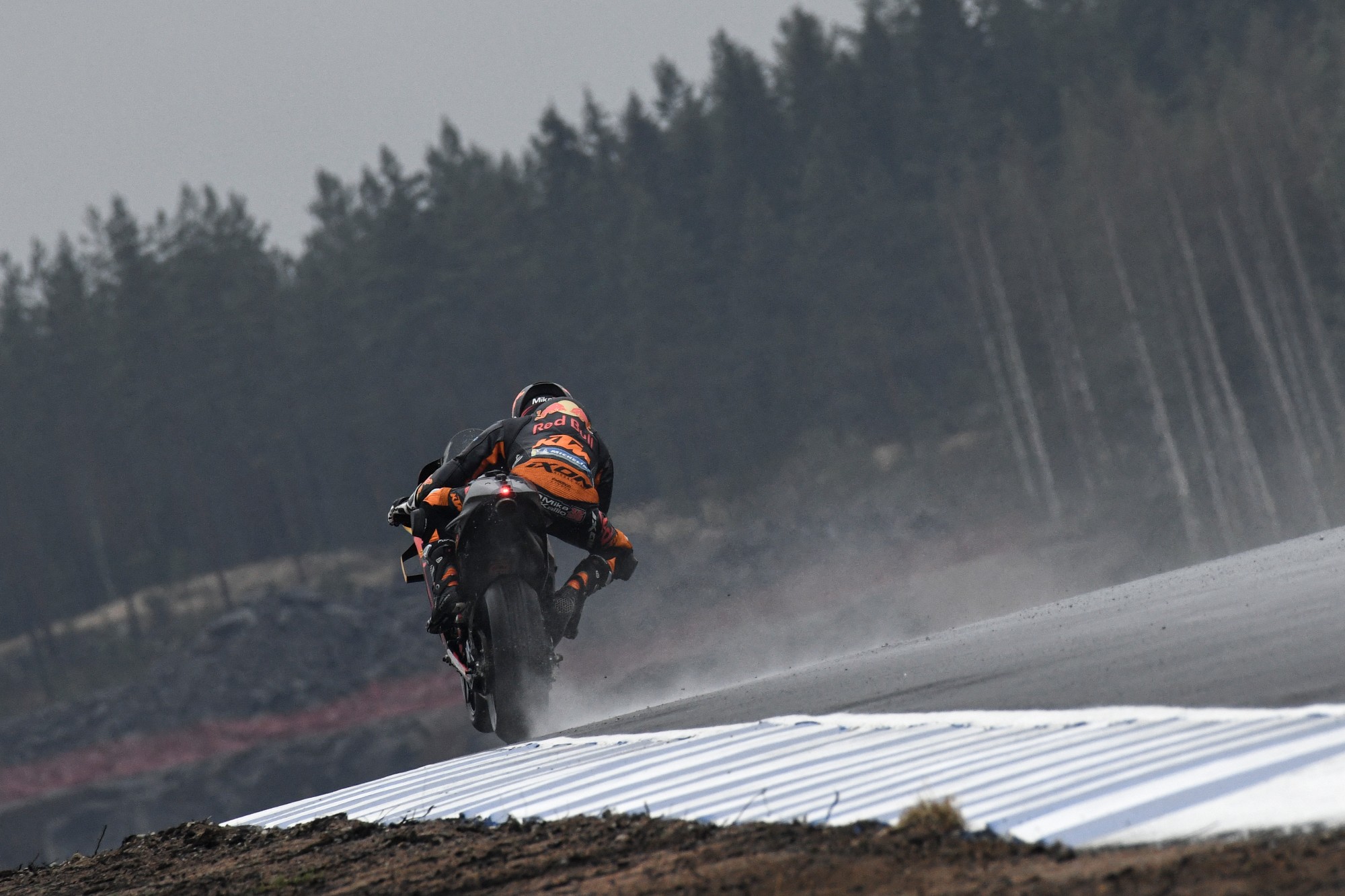 MotoGP™ meets the KymiRing: the first day of testing concludes in Finland

MotoGP™ has officially landed in Finland. Monday saw the first track action in a two-day test at the new KymiRing completed by manufacturers’ test riders, as well as two Press Conferences to mark the occasion for the gathered media to hear thoughts from officials and the riders.

The day was, unfortunately, wet and there was an immediate change to the program, with the timetable for the MotoGP™ runners changed to 12:00 to 18:00 local time (GMT +3). That meant it was the local heroes up first to try out the track, instead of at the end of the day.

That trend of home heroes first continued once the green light was on for the premier class test, with Mika Kallio out first on the KTM RC16 – with the latest chassis – to greet the fans who had flocked to the circuit to witness premier class motorcycle action in Finland for the first time since 1982. All six test riders eventually got a taste of the circuit though, despite conditions being far from ideal with rain falling throughout the day.

Aprilia’s Bradley Smith was the next out on track and the British rider was fastest at lunchtime with the first sub-two-minute lap. Ducati’s Michele Pirro and Honda’s Stefan Bradl were up next, with Bradl continuing development work on the carbon-reinforced chassis but also making some unwanted history by becoming the first rider to crash at the KymiRing as he went down at the final corner, rider OK. The German was also spotted as having a ‘salad box’ fitted to both bikes in his garage, which was last seen at the Sepang Official Test at the start of 2019.

Suzuki’s Sylvain Guintoli and Yamaha’s Jonas Folger were the last to try out the KymiRing later in the day, getting a taster before more action is expected tomorrow – as well as better conditions. Track time will be 11:00 to 18:00 local time, with young Finnish riders on track the hour before.

Check out motogp.com for more from Finland on Tuesday and gear up for more on Day 2!

Jorge Viegas, President of the FIM: “Finland is a country with a lot of tradition in motorsport. It’s on the way, I have been in this position, managing works on a circuit in my country 20 years ago, so I know what it feels like to have journalists coming, Dorna and the FIM coming…I know how it feels! But everything is going well, and I think it’s a privilege to be here for the first time.”

Tapio Nevala, President of the Finnish Motorcycle Federation: “It’s a big dream to have MotoGP bikes in Finland, my heart has been pounding. It’s very important for us for Finnish motorsport. A MotoGP race is important for our sport and for Nordic motorsport, as well as it being important for this whole area.”

Timo Pohjola, KymiRing Circuit Director: “We continue the work on infrastructure, we don’t have green on the circuit at the moment so we’ll raise the standard of the facility. A lot of work needs to be done, we have one year to do everything but the most important thing is that for safety reasons, especially, that we can have the test here. Because after that we know exactly where we will have everything like the curbs. So that’s important for us but also for the teams, that’s the meaning of testing. But overall I’m very happy, it’s been a long journey and I know many of you will recognise these words from a driver once: ‘Leave me alone, I know what I’m doing!’”

Aki Ajo, Ajo Motorsport: “We’ve been dreaming for years about this, to have this kind of track and to have the chance to have a MotoGP race in Finland. It was a special feeling for me this morning that I woke up in my own bed before a MotoGP test, which doesn’t happen very often! But seriously, it’s really important to have first track action here, now is the time to see what they need to do to finalise everything here so we can have a great race.”

Carlos Ezpeleta, Senior Sporting Director at Dorna Sports: “I visited for the first time with Franco Uncini a few years ago and honestly, it’s a great place and I have to congratulate everyone for the work they’ve done because it’s very impressive that we have bikes on track today. I know these past months have been hard for them and I must congratulate them because the job they’ve done is of a high standard. We’re very happy to have Finland back on the calendar, it’s one of the countries with a lot of history in motorsport as has been said, and we know that the requirements for a MotoGP track are very high, both on track and off, and the plan is to accommodate all of them so we’re very happy.”

Stefan Bradl: “Unfortunately we weren’t lucky with the weather, which was the biggest problem today. So I hope tomorrow it’s dry and we can get more impressions of this race track. It’s a very interesting track, it’s good to get some laps in the wet and so far so good! I’m looking forward to tomorrow because there will be better conditions and I think that will be better for everyone – spectators and us as riders, we’ll have more fun and enjoy this atmosphere here.”

Michele Pirro: “It’s a really nice track, it’s been difficult to understand in wet conditions! I hope conditions are better tomorrow and dry, that’s important. But I think the first part, it’s fast and really nice, the second part is slow but interesting and I like it. I hope tomorrow we can do some laps in the dry, but it’s a great track for MotoGP.”

Sylvain Guintoli: “The first part is good, Turn 1 to Turn 3, I like that bit a lot, you go down then up into the braking before the straight. I love it here in Finland, I’ve never been before and it’s been nice to visit the place. I like countryside so I’m happy here!”

Mika Kallio: “I think for everyone if you can race at home it’s something special absolutely, and I was the first guy out with the MotoGP machine today so that’s cool to be the first to make those laps. I agree with what the guys have said, some parts of the track are quite slow, at the moment and especially in these conditions and new tarmac, with water…it was quite slippery all the time and there we couldn’t quite get the right feeling. But hopefully tomorrow it’ll be dry and we’ll get more impression how the racetrack is.”

Bradley Smith: “This is a different track, very different to anything we’ve seen before, quite tight and twisty and a little bit slow in places, but we also have places like Silverstone where it’s flat out everywhere – sometimes it’s good to have a complete different end of the spectrum. Also we have three different categories! It’s not just for MotoGP and I think those smaller bikes will really fit this race track. Let’s see tomorrow. There are a lot of off camber corners here which makes it difficult for the riders, it’s a technical challenge.”