MotoGP: Riders Will Get Extra Practice Time To Learn New Surface At Sachsenring

MotoGP: Riders Will Get Extra Practice Time To Learn New Surface At Sachsenring 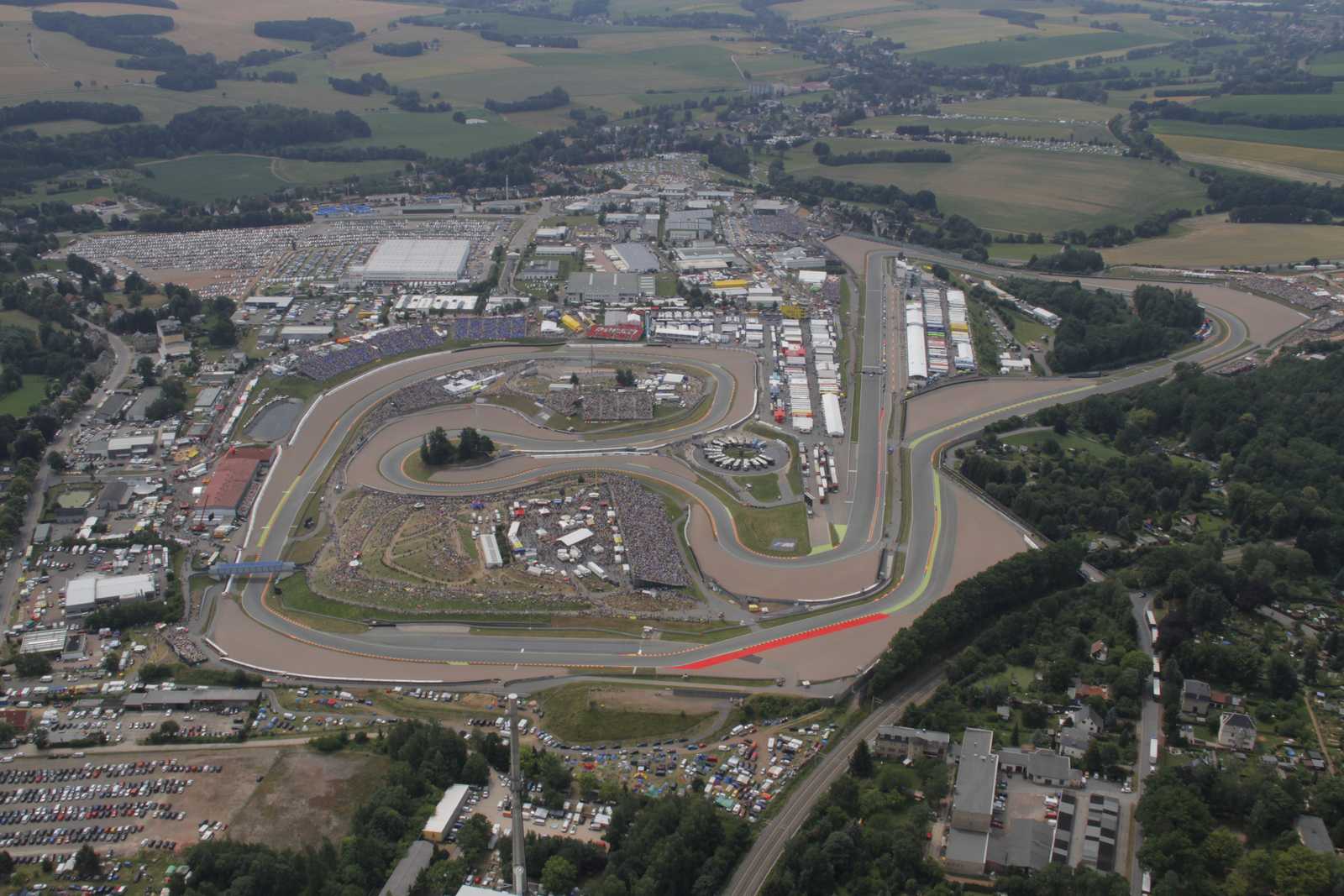 Sachsenring: the show will go on

The 3.7km, largely left-hander Sachsenring has fast become a signature venue for reigning Champion Marc Marquez (Repsol Honda Team), with the Spaniard having taken an impressive run of seven victories in a row at the track, from 125cc to MotoGP™. Is the lucky number seven? Marquez will be hoping not; looking to make it eight.

Anti-clockwise and with ten left-handers to only three right, the venue is unique on the calendar. This year it has also been resurfaced, with the grid therefore given more time to get to grips with the track. Due to limited availability of the circuit, it wasn’t possible to test beforehand – meaning an extra 10 minutes have been added on to FP1 and FP2. Both sessions will start five minutes earlier and end five minutes later, with the lower classes unaffected by the timetable change. In case of rain on Friday, a new schedule will be issued for Saturday – but FP1 and FP2 will remain extended in any eventuality.

Back on track, Marquez’ teammate Dani Pedrosa could be a key challenger despite a difficult Dutch GP. The ‘Baby Samurai’ has four wins at the track in the premier class – and two more from his title winning seasons in the 250 World Championship. Traditionally a track that suits the Honda, that could also bring into play last year’s podium finisher Cal Crutchlow (LCR Honda), who was also a key challenger for the podium at Assen this season.

The winner at Assen is a man with a track record, too. Valentino Rossi (Movistar Yamaha MotoGP) has three wins at the Sachsenring in the premier class and will be rolling into Saxony on a high – with weather a threat, too, it could all play the perfect hand for the ‘Doctor’ once again.

As well as a Rossi win and an incredible show at the ‘Cathedral’ last time out, there were other headlines made – chiefly in the Championship standings. The man now ahead for the first time in his career is Andrea Dovizioso (Ducati Team), after a solid fifth place finish avoiding risks and taking a big reward. Maverick Viñales (Movistar Yamaha MotoGP) was the crasher who caused the shuffle by failing to score – so now both have an interesting question: push for the reward, take the risk? Or play the long game…

Jorge Lorenzo (Ducati Team) will want to bounce back, Danilo Petrucci (Octo Pramac Racing) wants to stay on a roll and Johann Zarco (Monster Yamaha Tech 3) will be pushing to get back at the front. Andrea Iannone (Team Suzuki Ecstar) is another to consider, looking for another solid points finish. Red Bull KTM Factory Racing have their eye on the prize of points, too, after Pol Espargaro took their best finish last time out in P11. Three ‘Bulls’ will be charging in Germany, with test rider Mika Kallio joining Espargaro and Bradley Smith for the Austrian factory as a wildcard.

The rider with the weight of the home hopes on his shoulders is Jonas Folger (Monster Yamaha Tech 3). After blistering pace in Barcelona and having proven the only rider to score points in every race so far until a more difficult Dutch GP DNF, Folger has good form this year – and will be even more motivated to bounce back. The German MotoGP™ rookie is a podium finisher at the track in Moto2™, and has some serious prowess in the rain – always a positive as the weather can threaten in Saxony.

The final frontier ahead of the summer break is thirty laps of a track that lies in a region of real racing history. The finale to the first half of the season will certainly be a showstopper and with the Championship so close at the top, it could take a lead role in the story of 2017.

It’s back to regular programming for the German GP on race day, with the race set for 14:00 (GMT +2) on Sunday.

After some more difficult races, Championship leader Franco Morbidelli (EG 0,0 Marc VDS) extended his gap at the top once more in Assen with a stunning win. After one of the most spectacular Moto2™ battles of the season at the ‘Cathedral’, the frontrunners will be fired up again for the Sachsenring – somewhere that can stage some stunners, too.

In the wet last year both Morbidelli and teammate Marquez crashed out, as well as the man second in the standings in 2017, Tom Lüthi (CarXpert Interwetten). None of the top runners so far this season have a remarkable record at the track – but then the story of the season has often been rewriting the form book.

Dominique Aegerter (Kiefer Racing) is someone who will hope track records will count more. Taking a stunning first win in the class in Sachsenring in 2014, the circuit holds good memories for the Swiss rider – and he took that win on a Suter, too. With some good performances as he settles back into life on the bike, Germany could see him make a real challenge.

Mattia Pasini (Italtrans Racing Team) is another rider with a previous win at the track, in the 125 World Championship in 2006. With his pace this season added to a top four last year at Sachsenring, there’s no reason not to count the veteran Italian as a threat once again. Pasini’s key rival for P3 at Assen Takaaki Nakagami (Idemitsu Honda Team Asia) is another to watch – and then there are the home heroes.

Marcel Schrötter led the German charge last time out for Dynavolt Intact GP, and made an impressive push into the points from outside the top twenty after a difficult qualifying. Another winner at the track in the lightweight class to consider is Sandro Cortese, Schrötter’s teammate, and he will want to hunt for points after a tough Dutch GP and DNF. The team will also want to shine on home turf.

A unique venue, a unique challenge, and an incredibly close field – Moto2™ at the German GP will definitely be a show to remember. First practice is on Friday at 10:55 (GMT +2), with the race back to the normal schedule at 12:20 on Sunday.

Mind the gap: the grid close in on points leader Mir

Joan Mir’s (Leopard Racing) Championship gap got cut in Assen to the smallest it’s been for some time – 30 points. That’s sure to breathe some new life into the rest of the field as they hone in on the opportunity, with one race left before the summer break.

Sachsenring is a different track for Moto3™ than many on the calendar, with a 700m straight – meaning there’s much less slipstreaming than at venues such as Mugello. But the layout lends itself to close racing, and that’s another Moto3™ speciality. Last year Mir didn’t finish in his rookie campaign, but neither did some key rivals – with the weather proving the toughest adversary, and it could do again.

Rain or shine could tip the scales once again at Sachsenring, with Assen winner Aron Canet (Estrella Galicia 0,0) poised in second in the standings and only just ahead of Romano Fenati (Marinelli Rivacold Snipers) – then there’s Jorge Martin (Del Conca Gresini Moto3) in fourth and P19 to podium finisher John McPhee (British Talent Team) not far off in fifth, making a strong group of competitors all gunning for Mir.

The home heroes will also use their local knowledge to their advantage. Philipp Oettl (Südmetall Schedl GP Racing) has been on a Moto3™ podium before and showed great pace this year as he gets ready for his home race, and wildcard Tim Georgi (Freudenberg Racing Team) will be determined to perform on the world stage as he gets another taste of the Moto3™ World Championship.

It’s always too close to call in Moto3™, but after the gap was cut by a third in Assen the field now know there’s everything to play for – with the end of the season still a very long way off.