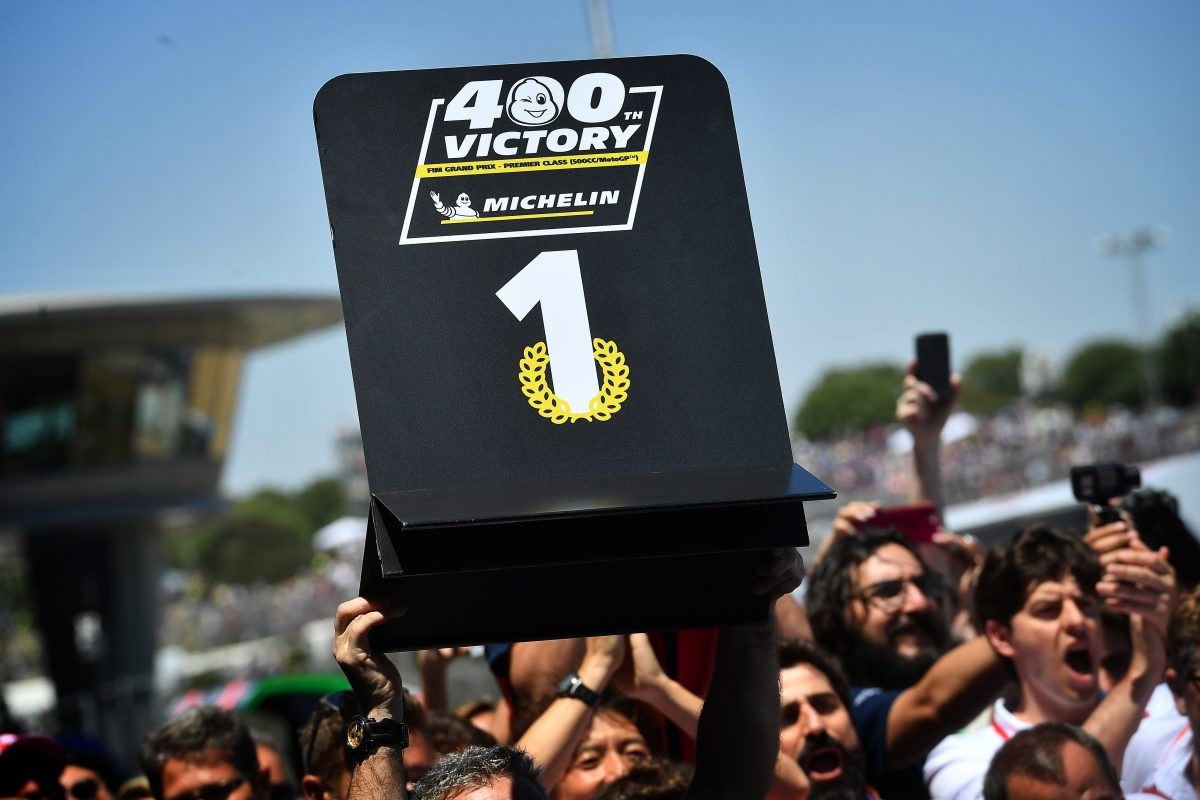 Michelin joined the 500cc World Championship in 1973 and recorded its first victory at the famous Isle of Man TT course as Jack Findlay from Australia raced to victory in the Senior Tourist Trophy event on a Suzuki.

The introduction to Grand Prix led Michelin to create bespoke motorcycle racing tyres in 1974, prior to that they had been derived from road tyres, and this innovation led to the first slick tyre being used in 1975, a move which led to Barry Sheene winning for the first time on a slick at the Assen TT in The Netherlands that year.

Sheene grew on this success and took Michelin’s first 500cc World Championship in 1976, a feat he repeated in 1977, which also saw Michelin win every race in the premier class. Success continued with world titles and more landmarks, such as Michelin’s innovative radial tyre making its racing debut in 1984. The first victory for a radial front came at the second round of that year during the Nations GP at Misano in Italy, as Freddie Spencer took the top step of the podium, followed by the first victory for a completely radial shod machine – front and rear – later that season, when Randy Mamola won the San Marino Grand Prix at Mugello.

Between the years of 1986 and 1989 Michelin took a clean sweep of all the Grand Prix classes, with victory in the 500cc, 250cc 125cc and 80cc championships, but it was in the premier class that the wins continued to grow. Wayne Gardner took the 100th win in 1987 in Brazil and Mick Doohan scored the 200th victory – also in Brazil – in 1996. As the victories rose Michelin’s 300th win was recorded by Sete Gibernau at the Dutch TT in The Netherlands in 2003.

Michelin’s final victory in the competition era – where numerous tyre manufacturers competed in the premier class – came at Catalunya in 2008, as Dani Pedrosa took victory before a forced hiatus of seven-years due to the single make tyre rule, stopped the French company’s winning run. During the period from 1973 to 2008, Michelin recorded a stunning 73% win-rate in the 500cc/MotoGP class, with victories for Honda, Yamaha, Suzuki, Cagiva and a single success for a Sanvenero, as Michel Frutschi won the French Grand Prix at Nogaro in 1982. Michelin’s winning streak resumed in 2016 as it returned to the MotoGP class as the Official Class Tyre. Since then is has seen a continuous run of 40 victories which culminated in Marquez taking first place on Sunday, and during that Michelin has added Ducati to its list of winning manufacturers. With Michelin’s contract in MotoGP set to continue until at least 2023, it seems highly likely that very soon the paddock will be celebrating 500 Michelin wins.

Michelin’s history in the premier class of motorcycle racing has seen 48 different riders from 11 different countries win at 51 varying venues around the globe, on some circuits that have seen many configurations through the years, proving that Michelin has consistently been at the top of the tyre performance for the world’s best motorcycles and racers, no matter where the championship goes or what the riding style or machine demands.

“This is an incredible achievement and one that we are very proud of at Michelin. To have completed 400 wins in such a competitive series is an accomplishment that needs to be celebrated and we have our innovative colleagues to thank for their foresight in the early days when they created such competitive and radically new tyres with the introduction of firstly slicks and then radial tyres. To have such a huge success rate in the competition era was amazing and those triumphs has also led to Michelin producing tyres for the road which have used technology directly from the racing arena. The 73% win rate in the open era is something to be celebrated on its own and when you consider that in the first three seasons that we were in the championship from 1973 to 1975, Michelin only scored three victories, then the success rate following that is even more incredible. We have had many great champions race to victory on Michelin tyres and we have been pleased to celebrate each victory, so I want to send my congratulations and thanks to all of them for helping us reach this fantastic milestone and here’s to the next 100.”

Hungary set to join the MotoGP™ calendar from 2023 A...
Read more
Feature