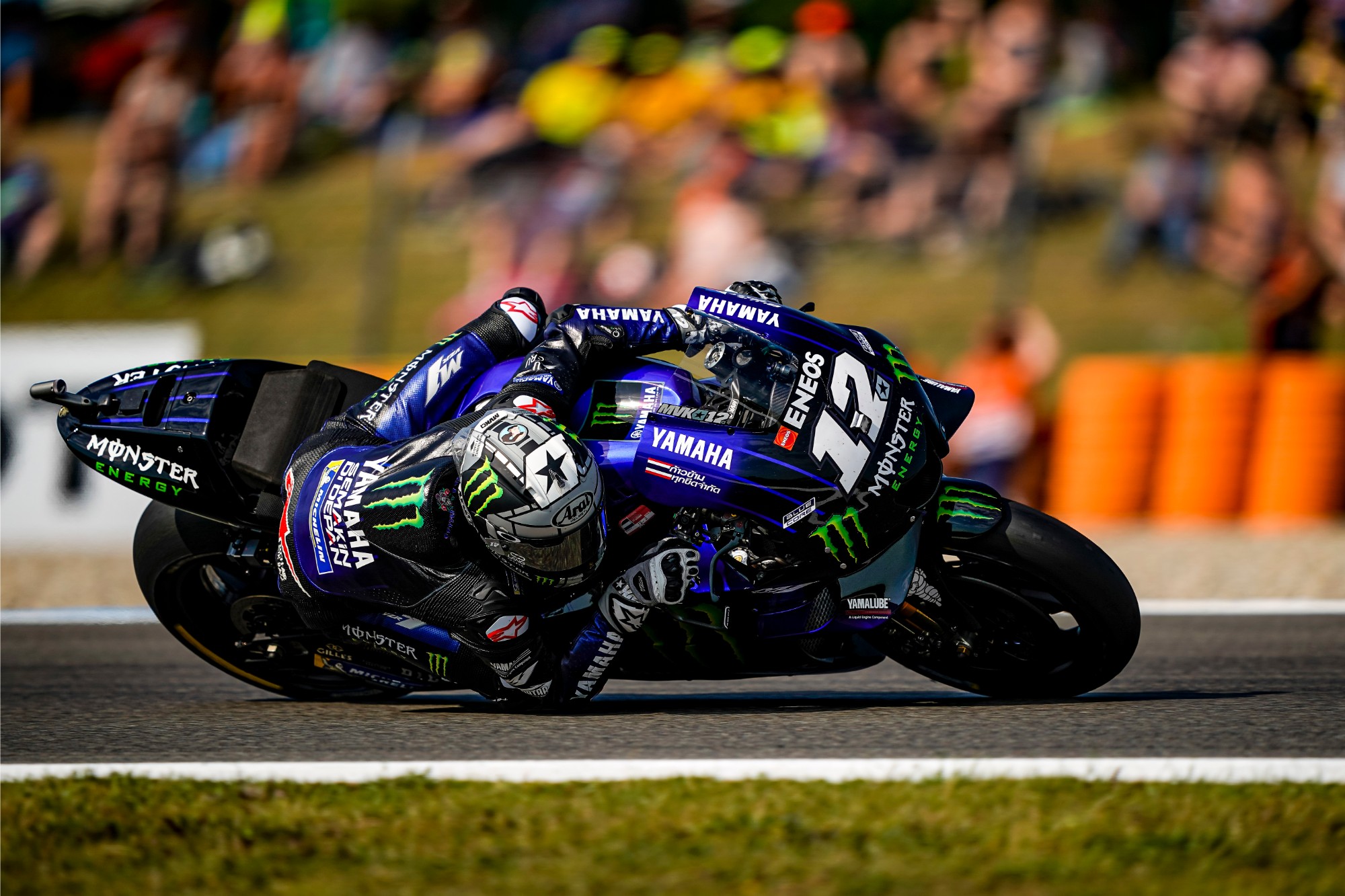 After a three-week holiday, the Monster Energy Yamaha MotoGP Team is itching to be back on track and start the second half of the MotoGP season at this weekend‘s Monster Energy Grand Prix Ceské republiky.

After a three-week abstinence from MotoGP racing, Monster Energy Yamaha MotoGP‘s Maverick Viñales and Valentino Rossi arrive at the Automotodrom Brno itching to be back on track again. They will be going full steam ahead at the tenth round of the championship, as the Monster Energy Grand Prix Ceské republiky shares the team‘s title sponsor.

Viñales arrives in Brno holding fifth place in the championship standings, after taking a superb win in Assen and a strong second place at the Sachsenring before the summer break. He is 100 points from first, and 36 points from entering the top-3, which he is aiming for.

The Spaniard is full of energy after three weeks of training and spending time with family and friends, and is ready to fight to make a return to the Brno podium. He stood on the Czech rostrum twice before: in 2013, having secured second place in the Moto3 race, and in 2017 when he took third place on his first race there on a Yamaha.

Valentino Rossi is also looking forward to stepping aboard his beloved YZR-M1 again. The Italian is currently in sixth place in the 2019 MotoGP rankings, just five points behind his team-mate, and is looking to build momentum at a track that‘s also special to him because he secured his first ever 125cc win at the Brno track in 1996.

The Doctor holds a stunning record on Czech soil: his 125cc victory in 1996 was followed by a 250cc win in 1999, a 500cc victory in 2001 and modern era premier class Brno victories in 2003, 2005, 2008 and 2009. All combined, the nine-time World Champion stood on the podium there 14 times and is keen on adding another Brno trophy to his collection, having finished just off the rostrum in fourth place in the last two years.

Brno already staged motorcycle racing events as far back as 1930, when racers would ride 500cc bikes through the villages and western parts of the city on a 29-km road track. The first Czech GP was held there in 1950 and became part of the World Grand Prix Championship from 1965 to 1982, until the new circuit was built during the 1980s. In 1987 the modern Brno track hosted its first FIM Czech Grand Prix, which soon became popular with both fans and riders thanks to its great atmosphere and location. The natural bowl in which the circuit is situated offers spectators a perfect view of the action as the second half of the season kicks off.

For those who want to get to know the circuit better, check out Monster Energy Yamaha MotoGP eSport Rider Lorenzo Daretti‘s eLap around the Automotodrom Brno.

“We‘ve used the summer break well to recharge our batteries, but now it‘s really time for some action again – we can‘t wait to get back out on track! Both Mack and Vale had the opportunity to relax and also train in preparation for the second half of the championship, which is full on right from the get-go. We start with back-to-back races in Brno and Spielberg, where we will need to push hard, and we also have the Brno test scheduled between these GPs – but we‘re looking forward to it. This year the Monster Energy Czech round is even more special to our team as we share the title sponsor with the event, so we are determined to score top results. We can‘t wait to greet the MotoGP fans again and enjoy the atmosphere, but this is also the time to work hard. It will be crucial that we immediately get into shape and feature at the front. Our goal is to score the best results possible at every weekend and we will put in 100%, like always, to do so.”

“We‘re starting the second part of the championship in a very positive mood. After the victory in Assen and the second place at Sachsenring we went on holiday feeling very happy, with the conviction that we‘re on the right track and with the peace of mind that you get after a job well done. We have been able to rest a little bit during the summer break, but it was also helpful to complete a lot of training in order to arrive at this GP feeling physically and mentally strong. The next two rounds are held at two tracks that I like a lot but where we‘ll have to work hard to obtain positive results. I think that I can show all my potential there and confirm that we are working in the right direction. Brno is one of my favourite circuits, so I‘ll give it my 100% to continue improving step by step.”

“During this summer break it was important to take some time off after the first part of the season and rest a bit. But now I can’t wait to be back on track, back aboard my M1, and concentrate on this second part. We will have two consecutive GPs where it will be necessary to work well and get the best possible results. It will be an important second half of the season because we need to improve, and we’ll also begin preparing for 2020, starting with Monday’s test. Brno is a track that I’ve always liked. I want to work well with my team to make it a nice weekend. We need a good result, so we’ll do our best.”