MotoGP: Fabio Quartararo Leads Day One Of Testing At Misano

MotoGP: Fabio Quartararo Leads Day One Of Testing At Misano 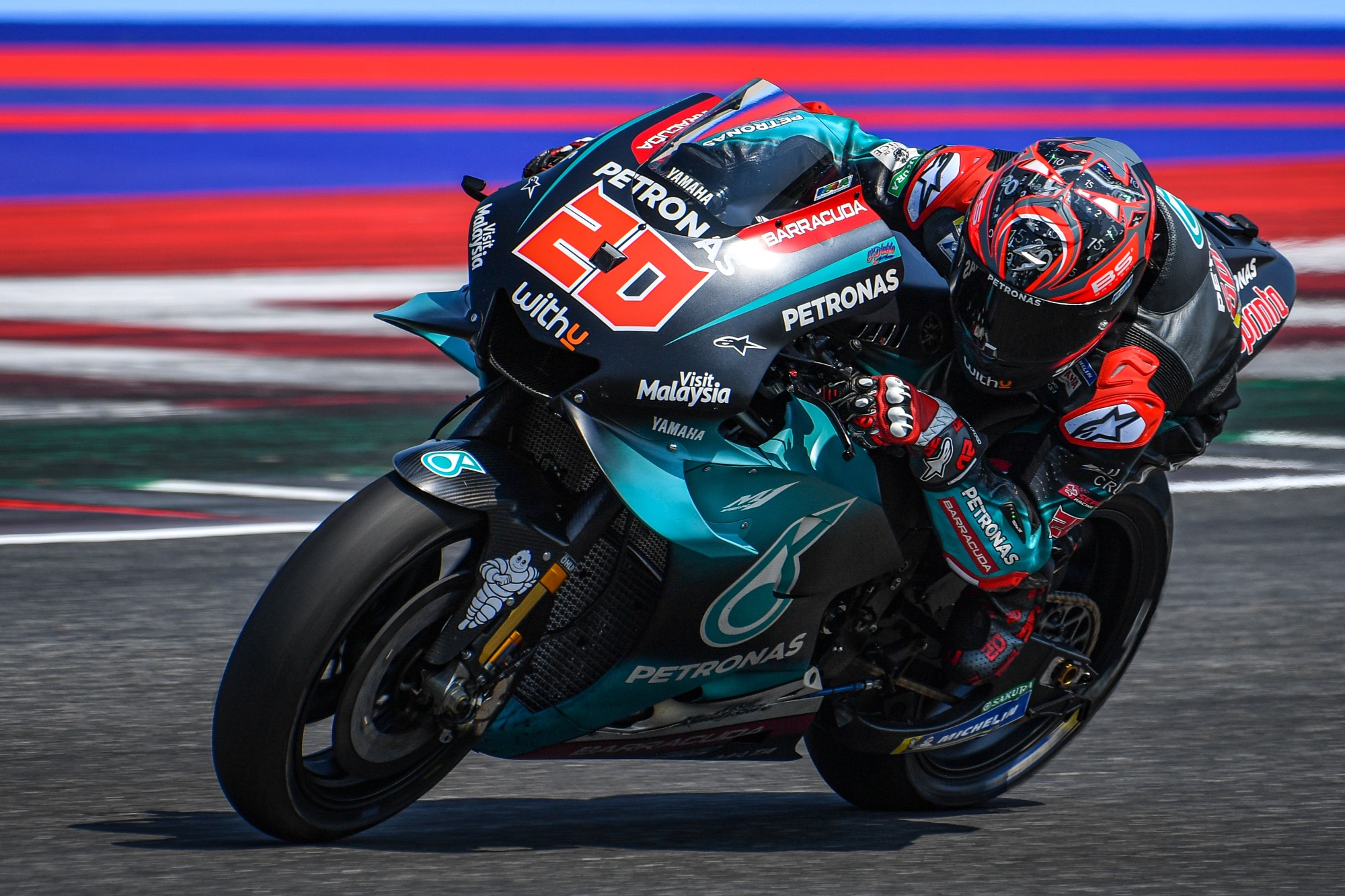 Day One Combined Test Times (all on Michelin tires):

Quartararo heads Morbidelli on Day 1 of the Misano Test

Yamaha assault the top on Thursday, with Marquez the only non-Yamaha in the top five

Petronas Yamaha SRT duo Fabio Quartararo and Franco Morbidelli set the pace on Day 1 at the Misano Test, the Frenchman’s 1:32.996 in the afternoon pipping his teammate by just 0.023 and making him the only rider in the 1:32s. The duo sit over two tenths clear of third-fastest Marc Marquez (Repsol Honda Team) at the end of the first day of track action, with the reigning Champion the only non-Yamaha in the top five. 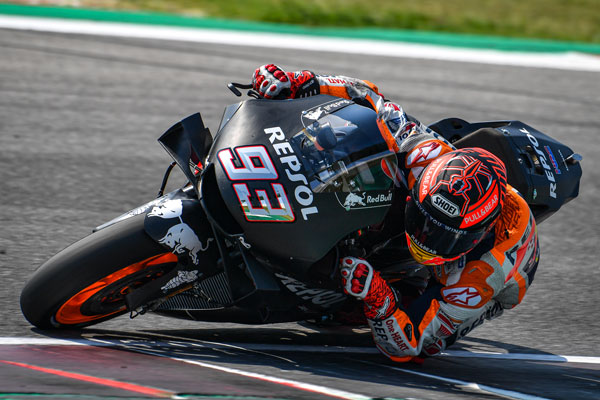 On a sunny Thursday at the Misano World Circuit Marco Simoncelli, neither Quartararo nor Morbidelli were testing anything in particular, but they both lit up the timesheets. It was the rookie’s first visit to the venue on a premier class machine so the main aim was to find the best setup for the Grand Prix weekend, with electronics the main goal for Friday. Morbidelli, meanwhile, wanted to test the Michelin tyres to find the best balance, with the aim of improving grip.

Monster Energy Yamaha MotoGP’s Valentino Rossi and Maverick Viñales were trying a second version of Yamaha’s 2020 engine, having tried a first one at the Brno Test. Viñales and Rossi finished fourth and fifth respectively to place all four Yamahas inside the top five, with the Iwata factory rolling out a different exhaust, similar to Suzuki’s double exhaust setup, as well as a carbon swingarm and a carbon cover on the front brake. ‘The Doctor’ had three bikes in his garage, while Viñales was out testing the front aero that was seen in Brno and the new tail unit we also saw in Czechia. 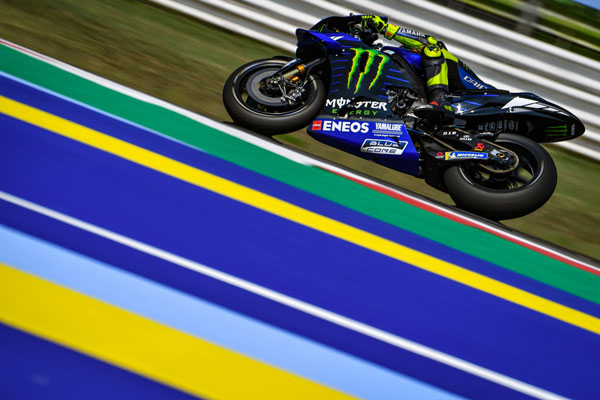 Championship leader Marquez had three bikes at his disposal for most of the day and then four by the end of play, with fellow Honda rider Cal Crutchlow (LCR Honda Castrol) given three to play with. Marquez’ completely black bike seemed to have a cover on the swingarm, while there was also some carbon reinforcement at the top of the chassis. HRC test rider Stefan Bradl was also on track with two bikes to use, one in Repsol colours and one in his usual HRC livery. The German was also on track with EG 0,0 Marc VDS duo Alex Marquez and Xavi Vierge on Wednesday, and now continues his program.

Jorge Lorenzo (Repsol Honda Team), meanwhile, is still suffering from pain, reporting it was worse than at Silverstone. The five-time World Champion decided to end Day 1 slightly early as he continues his comeback from injury.

At Ducati, Andrea Dovizioso (Ducati Team) was back on his GP19 in the afternoon session having been declared fit to ride earlier in the day, as were Quartararo and Joan Mir (Team Suzuki Ecstar). Ducati Team Manager Davide Tardozzi said the Italian’s testing plan was cancelled as ‘DesmoDovi’ checks his physical condition on the bike after his Silverstone crash. Teammate Danilo Petrucci, though, was testing electronics and test rider Michele Pirro had new chassis parts and settings to try, with the fairing he used at the KymiRing seen out at Misano on Thursday. In addition, Petrucci, Pirro and Pramac Racing’s Jack Miller had the swingarm attachment back on their bikes. 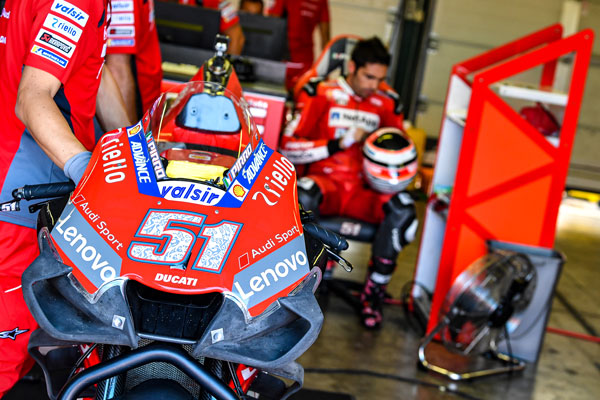 (Above) Ducati test rider Michele Pirro had a prototype fairing on his Desmosedici. Photo courtesy of Dorna.

At Red Bull KTM Factory Racing, it was a very positive day on the timesheets. Pol Espargaro and Johann Zarco finished 6th and 8th respectively, with the duo both working towards the race at the Misano World Circuit Marco Simoncelli. As always, KTM are constantly developing the RC16 and while working on race setup, the Austrian factory were also busy working on the chassis and engine. In the afternoon, test rider Dani Pedrosa took to the track before the MotoGP™ Legend does a full day of riding at the venue on Friday, with Zarco only riding on Thursday. On the Red Bull KTM Tech 3 side, Miguel Oliveira’s test ended after two laps as the Portuguese rider was still feeling the pain from his Silverstone crash. He flew home on Thursday, with Hafizh Syahrin the sole machine for the squad on track from then on, aiming to regain his confidence on the RC16. 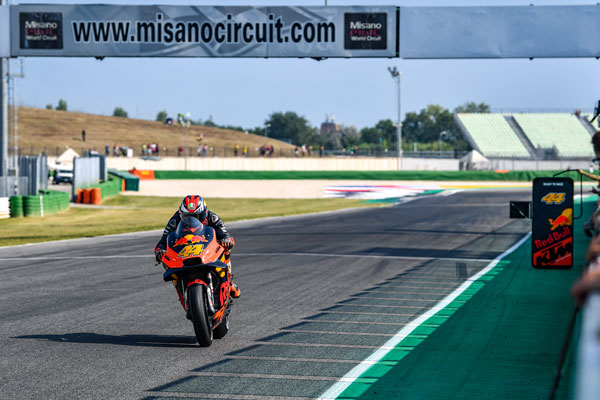 (Above) Pol Espargaro (44) was sixth-quickest on Thursday. Photo courtesy of Dorna.

In the Team Suzuki Ecstar garage, it was a return to action for Joan Mir after his injury layoff. The Spaniard finished P9 on the timesheets with a best time of 1:33.763 to finish 0.767 off Quartararo’s lap. Teammate and British GP winner Alex Rins was testing some settings for the race weekend, as well as checking parts on the swingarm, some electronics and a slightly different chassis they used in Brno to do some comparison work. Rins also suffered a crash at Turn 8 near the end of the morning session. 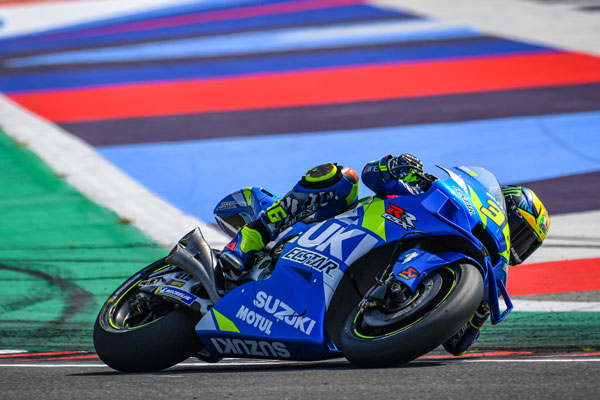 (Above) Joan Mir (36) returned from injury to test at Misano. Photo courtesy of Dorna.

According to Aprilia Racing Team Gresini Technical Manager Romano Albesiano, his team were trying a very different setup on the RS-GP. In addition, both Aleix Espargaro and Andrea Iannone were working on electronics, engine braking, the swingarm and the chassis. Espargaro finished 12th fastest with a best time of 1:33.842, with Iannone claiming P17. 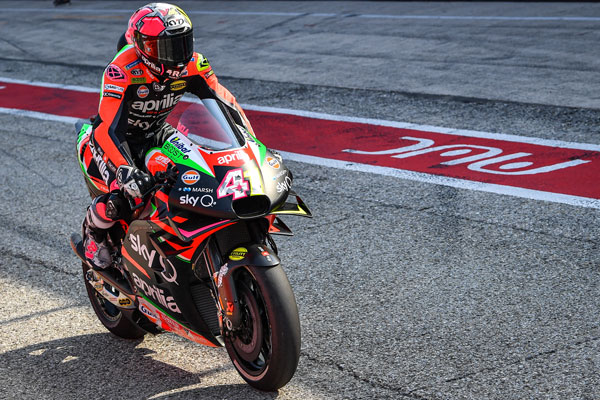 Reale Avintia Racing’s Karel Abraham left the circuit early as he was suffering from injury. The Czech rider was on the bike in the morning, with teammate Tito Rabat completing an impressive 74 laps in the afternoon. The Spaniard will complete a full day of testing on Friday.

In terms of tyres, Michelin provided the teams with the same allocation as they will have for the race weekend. In addition, the tyre manufacturer gave the riders the new rear that had previously been testing in Barcelona and Brno in a medium compound. And, there was also a new front casing, which has been developed to improve grip under braking. This was tested for the first time on Thursday.

That’s Day 1 complete at Misano, with plenty hustle and bustle up and down pitlane. They’ll be back out for another action-packed day on Friday, and in the meantime, interviews, full results and highlights from Day 1 can be found on motogp.com.