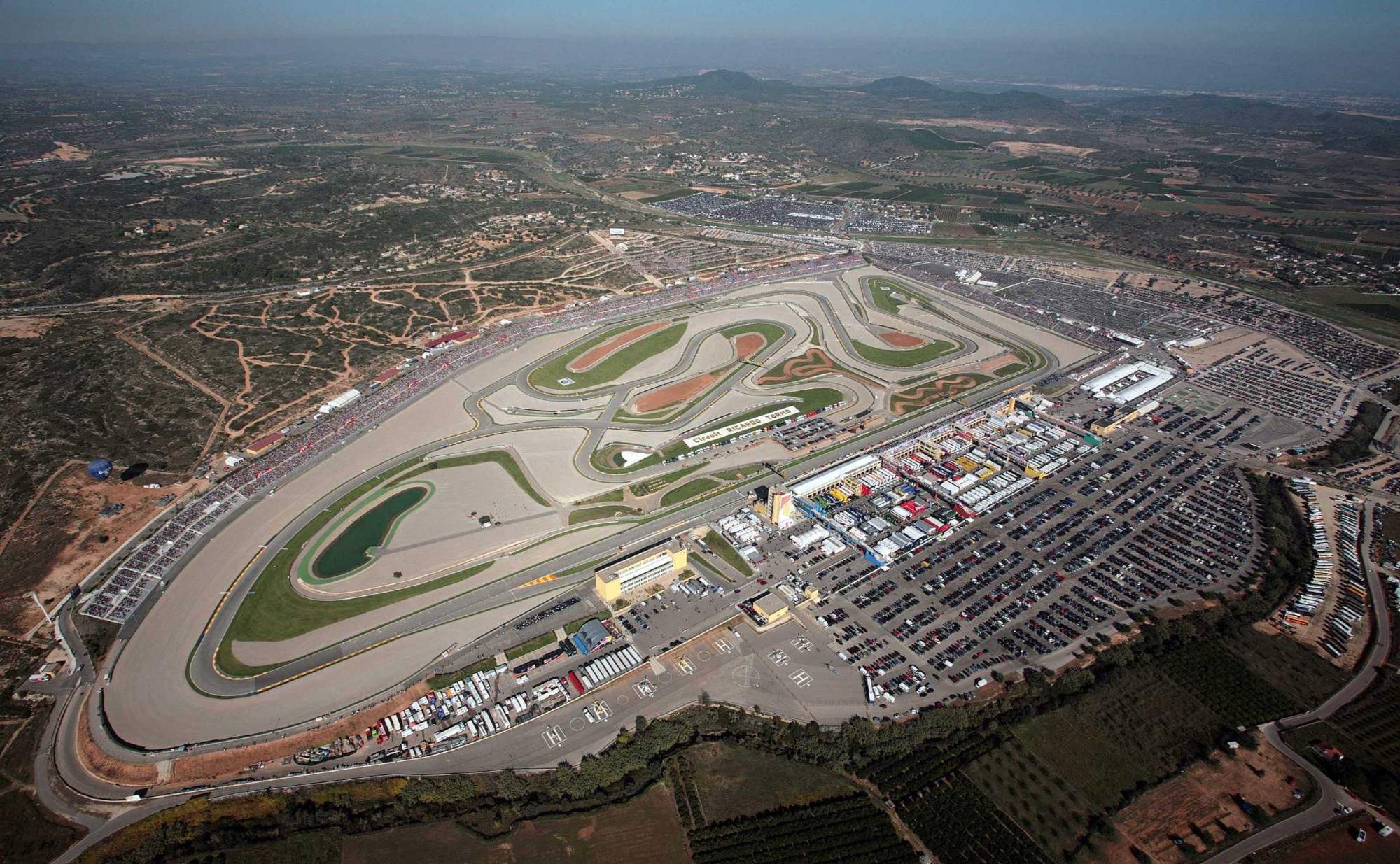 Take it to the limit:

Engines fire up for the final time in 2018

2018 has broken records, tested limits, reset the boundaries and rewritten some history. We end the season with a seven-time World Champion, some of the closest races and podiums in history, and another incredible highlights reel of this spectacular season. But it’s not over yet – there’s one more weekend to race.

Marc Marquez (Repsol Honda Team) likely arrives as the favourite. The reigning Champion took an impressive win at Sepang to bounce back in style, and he arrives as the home hero in form. Marquez also has a good record at Valencia – wrapping up two MotoGP™ crowns there since 2013, and winning from the back in Moto2™ – and he’ll want to win again on home turf to cement his stellar season. This year, however, there may well be more eyes on the other side of the Repsol Honda box at the season finale, with teammate Dani Pedrosa yes, having a great record there and yes, back on song at Sepang, but more importantly the three-time World Champion will be hanging up his leathers at the end of the season – in terms of competition at least. After a career competing with Honda and marking some incredible achievements, Pedrosa retires from active race duty after Valencia and will become a KTM test rider. On Thursday he will also become a MotoGP™ Legend as he’s inducted into the Hall of Fame.

Maverick Viñales (Movistar Yamaha MotoGP) is another home hero aiming high. After winning in Australia, Sepang was a tougher qualifying in difficult conditions that hampered the Spaniard slightly on race day, but Yamaha seem to be back in the fight at the front. He’ll want another win to end the season and his teammate Valentino Rossi, who came so close at Sepang, will want to win his first race of the year. Rossi’s incredible laptimes in Malaysia only came undone a handful of laps from the end, and although Valencia is traditionally a more difficult track for the ‘Doctor’, he was on fire at Sepang.

For the Ducati Team Valencia has also been a more difficult track at times. Last season didn’t quite put paid to that either as both men crashed out, but Jorge Lorenzo especially has an incredible record at the Circuit Ricardo Tormo. He is determined to make it through the whole weekend this time and make his return from injury, and although he may well not be able to hammer home the kind of pace he’s previously shown at the venue, he can’t be counted out altogether. For teammate Andrea Dovizioso it’s sometimes been a more difficult venue but some incredible battles in the past mean ‘DesmoDovi’ can’t be counted out. On the podium at Phillip Island to underline the incredible progress made by the Borgo Panigale factory at every different type of track, Dovizioso has second in the Championship wrapped up and will have a few points to prove in the last race of the year.

Team Suzuki Ecstar, meanwhile, are on form. Andrea Iannone has been on it despite a twitchy crash behind Marquez in Malaysia, and it’s his last race for the Hamamatsu factory. And Alex Rins showed once again last time out quite how competitive Suzuki now are as he took that stunning second place and equaled his best result in the premier class. Rins is on home turf and on a roll and can’t be counted out.

The man he beat to second at Sepang was Johann Zarco (Monster Yamaha Tech 3) as the Frenchman got back on the podium – and from pole after Marquez was penalised. After Zarco and Danilo Petrucci (Alma Pramac Racing) were both given the opportunity to make big gains on the injured Cal Crutchlow (LCR Honda Castrol) in Australia in the fight for top Independent Team rider and neither could, Malaysia was Zarco staking a serious claim on that title. The 16 points for third put him one point above Crutchlow and five clear of Petrucci – with his form last season at Valencia marking him as the favourite to outrace the rest. Rookie of the Year is also on the line, with Franco Morbidelli (EG 0,0 Marc VDS) looking to wrap that up.

At Aprilia Racing Team Gresini, Aleix Espargaro races at home and they bid goodbye to Scott Redding after the race weekend, with Red Bull KTM Factory Racing aiming to stay ahead of the Noale factory. KTM are two points clear as a constructor and a handful more as a team so there’s everything to race for – before they also begin a new era.

The 2018 chapter of the incredible story of the MotoGP™ World Championship draws to a close at Valencia, but the final race weekend of the season is far from an epilogue. The unique atmosphere of the amphitheater setting always makes it a race weekend to remember – and this time, that’s even more true than ever. Goodbyes and new beginnings start here – from the 16th to 18th November.

The graduates: can Bagnaia and Oliveira go out with a bang?

It’s the intermediate class swansong for many on the grid, including the newly-crowned reigning Champion – and Moto2™ as we know it

Francesco Bagnaia (Sky Racing Team VR46) was back on the podium in Sepang, and although key rival Miguel Oliveira (Red Bull KTM Ajo) finished just ahead of him, the 16 points for second were more than enough for the Italian to wrap up the crown. Teammate Luca Marini also won the race – his maiden Grand Prix victory – making it an incredible day to remember not just for ‘Pecco’ but for the team. It caps off an incredible season, and sets up the perfect swansong in Valencia.

Bagnaia has been a serious force to be reckoned with this year, taking control of the standings pretty early and hammering home that advantage in the latter half of the season. So will his final race in see him back on the top step? Or can Oliveira – last year’s winner – or Fabio Quartararo (MB Conveyors – Speed Up) take another Moto2™ win to also leave for the premier class on a high and another addition to their CVs?

Bagnaia will surely feel the most confident heading into Valencia, but the spring in Marini’s step will likely mirror that of his compatriot; fresh as he is from a maiden win. Meanwhile Brad Binder (Red Bull KTM Ajo) is looking for more of a bounce back after a tough Malaysian GP, but the South African did wrap up P3 overall in the standings at Sepang. The likes of Marcel Schrötter (Dynavolt Intact GP) want to move back towards the front, too – with the German still looking for that maiden win and maiden pole.

Alex Marquez (EG 0,0 Marc VDS) was another who, like Binder and Schrötter, didn’t get the results he’d wanted on race day last time out. The 2014 Moto3™ World Champion dominated practice and qualifying – half a second clear on pole – but it didn’t become his first win of the year. He has chance to take that in Valencia, however, at a track that holds good memories for him and where he’s racing in front of a home crowd. His teammate will also be doing that and is one who will graduate to the premier class next season. With just two points between them as is stands, can the Rookie of the Year strike for his first – and only – Moto2™ win before he moves up? Or will experience play in Marquez’ favour?

There’s one last race for this era of Moto2™, with more than simply the names changing next year: 2019 sees the debut of Triumph power for the intermediate class. Someone will take the honour of the last win of the year before the next era begins – for man or machine. Find out who from the 16th to 18th November at Valencia.

The last hurrah: Valencia awaits the Moto3™ class of 2018

As we head back to shores closer to home for those who fought for the Moto3™ World Championship this season, there’s one final set of bragging rights on the table for the riders graduating to Moto2™. Can Jorge Martin (Del Conca Gresini Moto3) seal another win before he moves up as reigning Champion? Or can Marco Bezzecchi (Redox PruestelGP) or Fabio Di Giannantonio (Del Conca Gresini Moto3) bounce back from losing the crown to take to the top step one final time?

Valencia is a very different track to Sepang; likewise the conditions and temperatures. Add to that a little more experience of the venue for many and it’s sure to be another corker. Martin took his first win there in 2017 and will surely arrive as the favourite, but the motivation of those on the losing end in Malaysia can’t be underestimated.

The cast of those with everything to gain doesn’t stop there, either. Enea Bastianini (Leopard Racing) is moving up too, as is Philipp Oettl (Südmetall Schedl GP Racing). Then there are home heroes like Aron Canet (Estrella Galicia 0,0), Albert Arenas (Angel Nieto Team Moto3), Marcos Ramirez (Bester Capital Dubai)…and the likes of his teammate Jaume Masia, who’s fighting for Rookie of the Year and will be hoping to be fit to race on home turf.

The time has come! The final stand and the last fiesta of the season rolls in to Valencia on the 16th – 18th November, make sure to tune in to see if more records can be broken and who’ll close out 2018 on top.