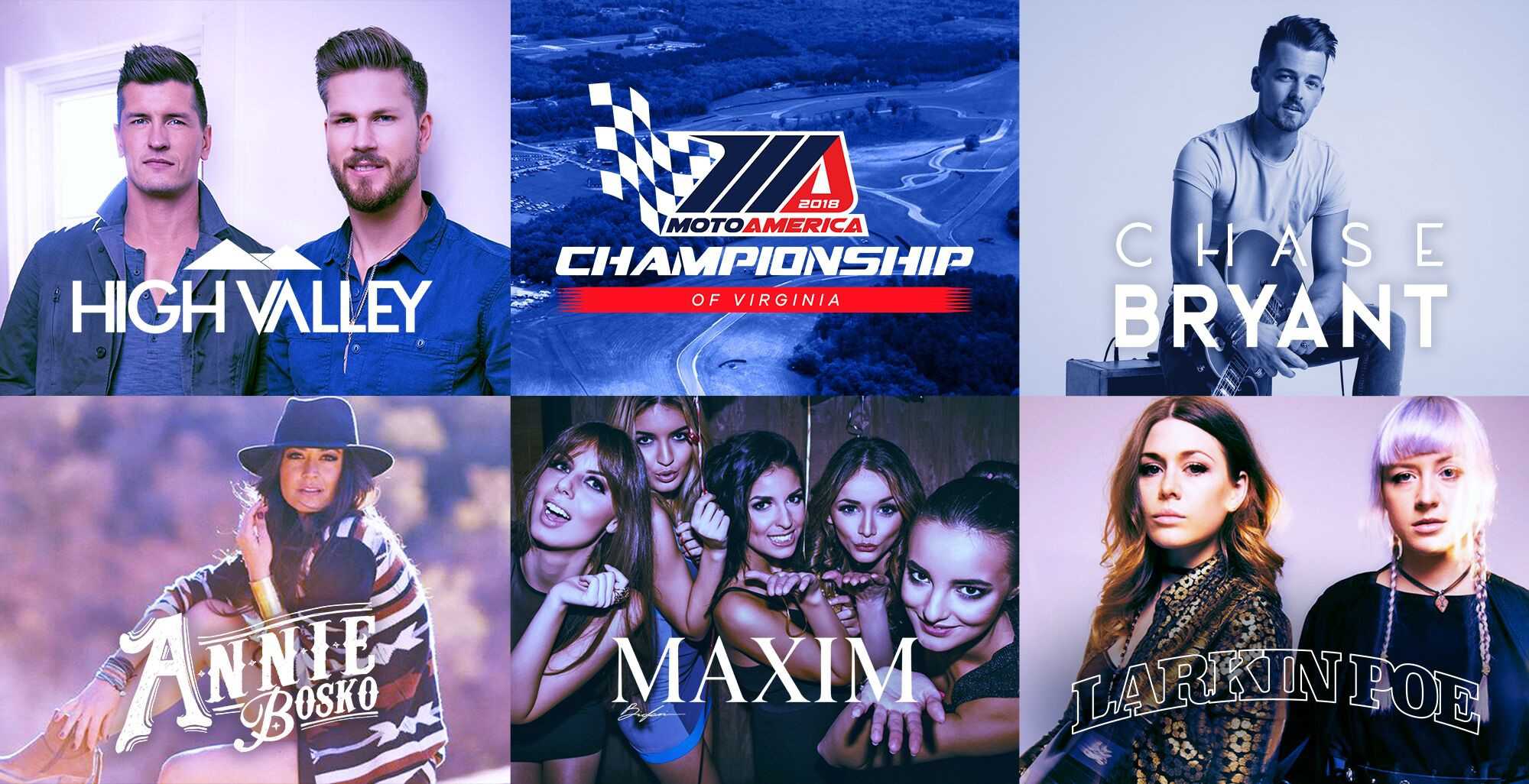 MotoAmerica to Hold Music Festival at The Championship of Virginia

COSTA MESA, CA (April 17, 2018) – The third round of the 2018 MotoAmerica Series, the Championship of Virginia at VIRginia International Raceway in Alton, Virginia, on the North Carolina border, will feature the Maxim MotoAmerica Tailgate Campout, a mini-music festival held during the middle of the races. Country music acts High Valley, Chase Bryant, Larkin Poe and Annie Bosko have all been recognized as top rising artists by sources such as Rolling Stone Magazine, the CMA, People Magazine, CMT and more.

“We’ve been working hard to add new types of energy to our events, which already feature some of the most exciting racing in the world,” said MotoAmerica President Wayne Rainey. “I’m excited that at VIR this will include these great young bands playing a tailgate party like no other.”

The first round of the MotoAmerica Championship Series, held at Road Atlanta, featured Tony Hawk & Friends – five world class skateboard and BMX athletes – performing on a 40-foot skate ramp to the sounds of renowned DJ Jayceeoh. The excitement hit a fever pitch following an adrenaline-pumping Motul Superbike race, and many fans came away saying they felt it was one of the best races they’d ever attended.

“I’m from Virginia originally, and one of my favorite things has always been a great party out in the country,” said Alec Marshall, Chief Marketing Officer at MotoAmerica. “We wanted to bring an authentic feel to this event and having Maxim on board to kick it up a notch became a perfect combination. While our race fans already expect great fun at MotoAmerica, we’re excited to introduce the experience to camping enthusiasts, country music fans, and just about anyone else.”

Maxim Models will slip on some daisy dukes to host the Maxim MotoAmerica M2 Lounge, but the fun won’t be locked in there. Fans can camp out on thousands of acres of beautiful rolling Virginia hills, wake up in the morning to some of the fastest athletes in the world, lunch on some good Southern BBQ and red-cup beverages, and finish off with one of the best lineups this side of Nashville.

The acts scheduled for May 5 are…

High Valley “She’s With Me”

While their upbringing didn’t exactly acquaint them with the Billboard 100, it’s that insulation that helped cement their musical ideals and love of simple, classic country, allowing High Valley’s music to feel simultaneously fresh and timeless. Dear Life, their recently released major label debut on Atlantic/Warner Music Nashville, is an album that fuses tradition with wide-eyed musical exploration, stays true to their family-first value system and celebrates resilient positivity.

The Rempel brothers have already scored six Top 10s, three Gold certifications, played to 15,000 seat arenas opening for Shania Twain and earned multiple awards show wins – including Canadian CMA Group of the Year. And now with their major label debut, a fall tour with Martina McBride and a headlining U.K. trek on the way, it’s true that High Valley inhabit a much different world today than the one they were raised in.

Chase Bryant “Little Bit Of You”

One of the most celebrated new artists in today’s country music landscape, 24-year-old Chase Bryant was raised in Orange Grove, Texas (pop. 1200). Bryant’s grandfather played piano for Roy Orbison and Waylon Jennings. Bryant’s second consecutive hit “Little Bit of You” rose to number three on the country radio charts. His guitar-wielding Top 10 debut single “Take It On Back” spent 15 consecutive weeks on the CMT Hot 20 Countdown, seven weeks on the GAC Top 20 Country Countdown, and was a Top 20 Most Watched Video on VEVO TV Nashville.

Larkin Poe is an American roots rock band from Atlanta, Georgia, fronted by sisters Rebecca Lovell and Megan Lovell. Featuring strong southern harmonies, heavy electric guitar riffs, and slide guitar, they are often touted as “the little sisters of the Allman Brothers”.[1] The band performed at the 2014 and 2016 Glastonbury Festival, and were voted “Best Discovery of Glastonbury 2014” by England’s The Observer. Last Fall, Rolling Stone Magazine named Larkin Poe one of “10 New Country Acts You Need to Watch”.

Two voices — one given, one earned. Singer, songwriter and entertainer Annie Bosko has married the two, recognizing that a powerful and beautiful vocal instrument is, in isolation, incapable of taking her where she has every intention of going.

Born and raised a farmer’s daughter and the middle of five children, Annie is no stranger to hard work and fighting for her voice to be heard. She’s entertained audiences up to 300,000 people, played the Grand Ole Opry, received a standing ovation at Ryman Auditorium and has toured the country opening for acts such as Dierks Bentley, Blake Shelton, Martina McBride, Wynona Judd, Big & Rich, Josh Turner, Pat Benetar and more. She has shared the stage and performed with Adele, Darius Rucker, Andrea Bocelli, Josh Groban and more.

Returning to MotoAmerica after their daredevil shows at Road Atlanta is the unbelievable Wall of Death, where riders literally climb the walls on vintage motorcycles and go karts. There’s also plenty for the kids to do at VIRginia International Raceway with the Kids Zone featuring the Strider bikes, Mini Moto exhibitions, a pump track, bounce houses and more.

MotoAmerica is also offering VIP ticket packages, Full Throttle Experiences and camping on site at VIR International Raceway. The Dunlop Two-Up Suzuki Superbike will also be taking VIPs and members of the media on hot laps around the racetrack throughout the weekend.

For more information on the MotoAmerica Championship of Virginia, visit www.motoamerica.com/virginia