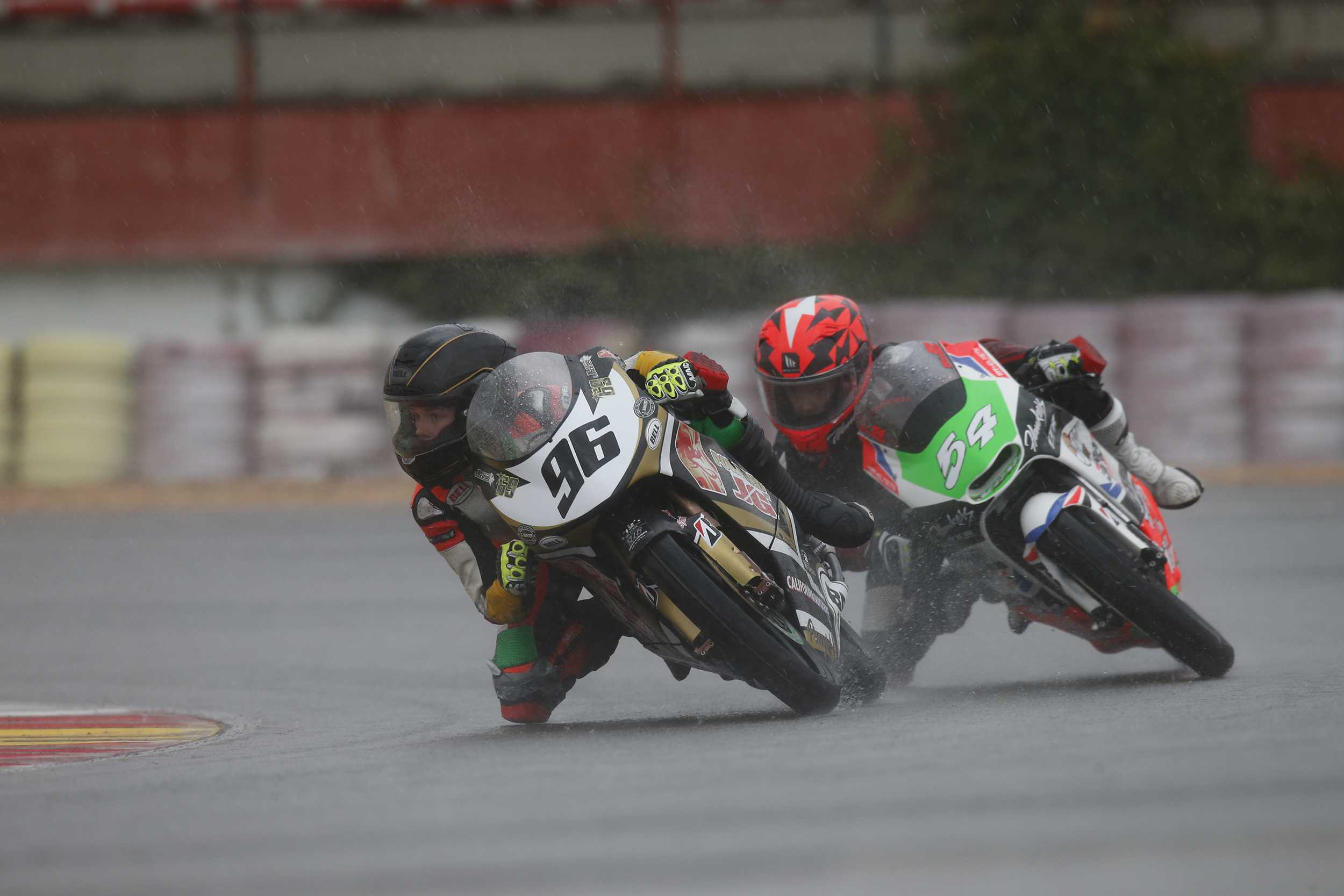 American Rocco Landers is anxiously awaiting Round Two of the CEV RFME 85cc Championship, scheduled for May 26-27 at Circuit de Barcelona-Catalunya, in Spain, following a pair of podium finishes in the opening round of the series April 7-8 at Alabacete.

Over the course of a weekend at Albacete filled with many challenging and varying track conditions, Rocco Landers proved his ability to stay focused, press forward, and stay near the front in his qualifying and both races on Saturday and Sunday.

For Saturday’s 1st qualifying session, Rocco had a few mechanical gremlins that kept him from completing any flying laps. He came back for Q2 and put his Beon 85cc two stroke machine in P2 for the start of Saturday’s race.

As the riders pulled up to their grid positions sprinkles started to lightly coat the track. All riders were on slicks. With not enough rain falling to call it an official “wet” race, the green flag flew and the race started. After 2 laps, Rocco was in P2 with a large margin between himself and the rider in 3rd place. He quickly dropped the 2nd group that he was in and began making ground on the lead group. After about 4-5 laps, the rain really started to come down, a couple riders crashed, and the red flag was flown. All riders mounted up rain tires for a restart. In the restart, Rocco battled with 2nd place for a lap or so, then settled into his own rhythm after not having the best feeling from his rear rain tire.

Rocco had this to say about Race 1, “It was like riding on ice when we were out there on slicks at the start of the race, we were all sliding like crazy when the rain really started to come down. I felt comfortable chasing down the lead group. Unfortunately I did not have a great feeling from my rear rain tire, so I rode within my limits and was able to finish on the box in P3. My first podium in at this level felt FANTASTIC! Thanks so much to my crew for all their hard work in the cold and wet conditions! They stayed up late Saturday night to fully go through my race bike in order to get it ready for Sunday’s race.”

For Sunday’s race, the track was about 60% dry with wet spots scattered around the track. After not the greatest start, Rocco found himself in P4. He made his way up to the rider in P3 and made the pass. At that point, he was about 6-7 seconds behind P2. As the race continued, he was able to reduce that down to about 2.5 seconds by the end of the race.

Rocco says: “We had decent speed today, but I learned again the valuable lesson of how important it is to get a good start. We were involved in a battle that held all of us up for a bit. I was finally able to get one of my competitors to just follow me by pointing at my tail section. We started to make rapid progress on catching P2, however in the end, we ran out of laps, so another 3rd place!”

Rocco now sits P4 in the championship, just 1 point out of 3rd and 2nd place.

Donations to help keep Rocco racing in Europe for the 2018 season can be made at:

Mladin Says He Was A Victim Of Domestic Violence